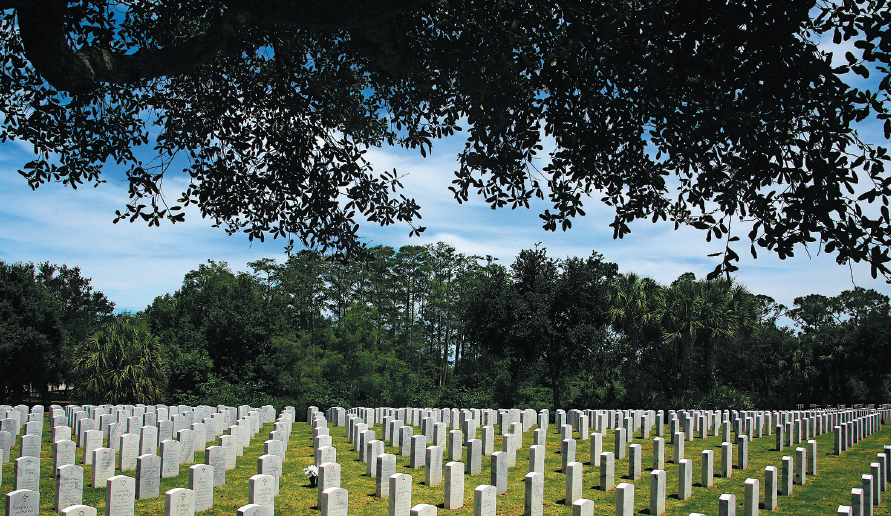 The 335-acre South Florida National Cemetery has impeccably maintained burial grounds nestled within pine flatwoods and surrounded by cypress domes that enable it to exude a sense of calm.

On Memorial Day, we honor our fallen military members with parades, speeches and plenty of pomp and circumstance. But this year, the onslaught of the novel coronavirus has changed just about everything.
That’s why we are lucky that we have a shrine to honor our veterans year-round, day or night, rain or shine and, yes, even during a pandemic.
It’s the 335-acre South Florida National Cemetery, one of the busiest, and, I think, loveliest in the state.
“This cemetery is designed to be a lasting tribute to our veterans so that not only current family members but generations to come can visit and reflect on their loved ones and the services they provided to their country,” says Kevin Ridgeway, who was the assistant director of the cemetery until recently, when he became director of the Hampton National Cemetery in Virginia. 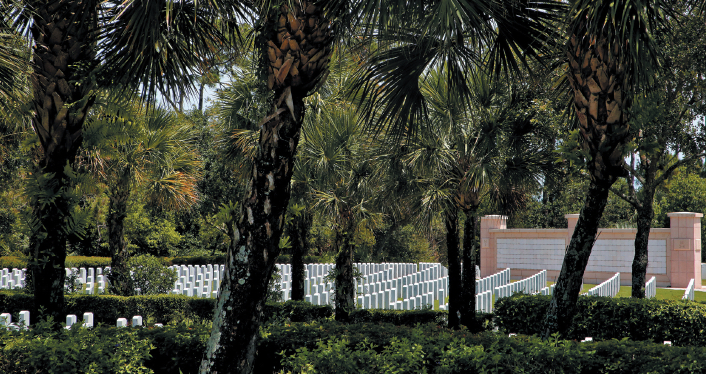 With mitigated wetlands and carefully maintained cypress domes buffering manicured burial fields set within pine flatwoods, the cemetery exudes a sense of calm and respect for not only our country’s warriors but also nature.
I know that’s true because on June 10, 2019, I buried my husband, a Korean War veteran, in this hallowed ground. And since then, I’ve visited it often to find peace and comfort in this very South Florida setting.
But it wasn’t always this way.
The cemetery was inspired by need when early in the century, the Department of Veterans Affairs identified more than 420,000 veterans living within a 75-mile radius of the Palm Beach County area.
“It is critical for our veterans to have a cemetery in close proximity to where they live,” says Michael Kroll, CEO and president of Miller Legg, the civil engineering and landscape architecture firm that was charged with designing the cemetery.
Up until then, the closest facility was in Bushnell, about a 3½-hour drive north.
In 2002, the VA purchased a 300-acre parcel along U.S. 441 in Lake Worth (the cemetery later grew to 335 acres with the purchase of an adjacent nursery).
Then the search was on for the people who could bring to it “the level of design required of a cemetery of shrine status,” explains Kroll.
He believes his firm was selected because it had created many other Florida cemeteries and had expertise in working with Florida’s ecosystems. “We prefer leaving the land in its more natural state rather than doing a very formal planting that you see in many national cemeteries,” he says.
On his first visit to the location, Kroll found established Florida habitats, but he also remembers fighting his way through a bramble of blackberries on his way to wetlands.
The natural areas also had been covered by large swaths of invasives, including melaleuca, Old World climbing fern and Brazilian pepper that shaded out and strangled native species, says Katharine Murray, president of Environment Quality Inc., the Tequesta company hired to oversee and preserve the wetlands.
Nathan Williams, southeastern district agronomist for the VA National Cemetery Administration, recalls an early visit by saying, “There were a lot of wetland areas and a lot of trees including some cabbage palms, some scrub oaks and quite a few pine trees. But then there was sand and a whole lot of underbrush.”
This being South Florida, one of the first orders of business was to start the permitting process to protect the wetlands, a process that involved multiple agencies and could take up to three years.
Next, Kroll and his team went to work on a master plan. 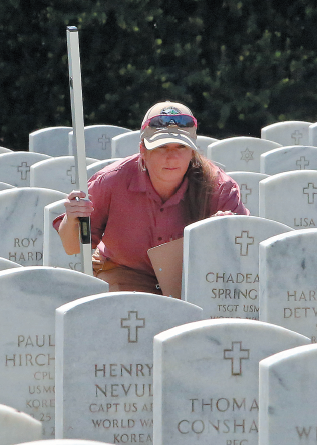 Amy Pena, grounds forewoman at the cemetery, checks that the headstones are properly maintained and aligned.
Photos by Tim Stepien/The Coastal Star

This was not an easy project as there was pressure from local veterans and state politicians to “get the place open.”
The first veteran was interred on April 7, 2007, in what was considered to be the cemetery’s “fast track” element. It was set on 8 acres buffered from traffic by naturally occurring pine trees and dense understory, according to Ridgeway.
Just after it opened, my husband and I visited. What I remember from that first visit was sweating uncomfortably as the sun beat down on unshaded white marble headstones lined up starkly in white sand, making the place glaring and hot.
A parking lot, fashioned from construction rock, housed a trailer that served as the administrative headquarters where we picked up a pamphlet explaining the veteran’s right to be buried here, as well as a spouse or dependent child.
By the time we left, I told my husband there was no way that, when the time came, I was leaving either him or myself at this cemetery. But my husband had different ideas.
From that day, he had faith that the VA would create a fitting memorial for military members who chose to make this their final resting place.
And unbeknownst to me, who didn’t return to the cemetery for another 11 years, that’s exactly what happened.
During the first phase of development, which covered 185 acres and was completed in 2010, Kroll and his team continued to remove invasives, adding wax myrtles, sabal palms, slash pines and other native foliage to the natural areas that were left as buffers between the burial fields.
And they continued to excavate what is today a central lake that’s also used for irrigation. Here too they used the fill to raise the existing pine flatlands, making them suitable for additional grave sites.
“In our designs, we appreciate the contrast between natural landscapes and manmade landscapes,” says Kroll. “Here you see a very dynamic contrast between areas of highly maintained marble headstones and, behind them, lush forests of pine trees or oak trees with understory plants. The contrast between these two habitats’ textures are fantastic.”
Kroll also added unobtrusive administrative and maintenance buildings; loop roads; columbariums and burial plots to hold cremated remains; and a memorial walk as well as committal shelters. It is in the shade of these shelters that, just before a burial, taps is played and an American flag officially folded and presented to family members as they honor their deceased loved one. 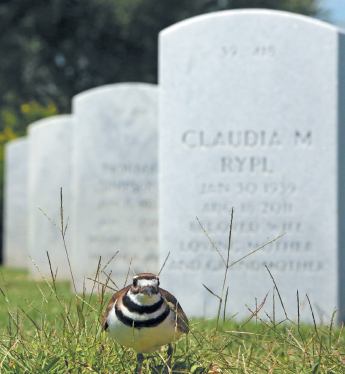 A killdeer stands in front of a grave at South Florida National Cemetery. The birds build nests among the gravestones.

Through all this, Kroll and his staff preserved and created habitat that welcomed nature’s other inhabitants, including largemouth bass, butterflies, snakes, alligators, woodpeckers and even a pair of bald eagles spotted in the back of the property.
With all this completed, it was time for my husband and me to return to the South Florida National Cemetery to take another look. We did so in early 2019, when we knew his health was retreating and finding a burial place was heavy on our minds.
Here, instead of blazing sun and blinding marble, we discovered birds singing in the lush tree-filled buffer areas, sabal palms clearly outlined against blue sky, a cool breeze wafting across the manmade lake ringed with purple blooms of pickerel weed, and tiny lizards playing hide-and-seek among the gravestones.
People regularly were coming and going as they quietly and reverently visited their loved ones’ graves, giving what could be a very deserted and regimented place a pleasant sense of activity. There was plenty of thriving habitat for everyone and everything.
It took only that one visit to convince me that the South Florida National Cemetery is a unique place. And I agreed to commit my husband and myself to its perpetual care.
With time marching on, the cemetery is readying itself for a $31 million Phase Two that is slated to begin this summer and include the northwest quadrant of the property.
It will add a new entry gate and sign, as well as a public assembly area with garrison-size flag on an 80-foot pole, memorial walkway, memorial wall and committal shelter as well as columbariums and burial fields for about 20,000 interments.
With Memorial Day approaching, I am grateful for the care and respect this cemetery and its staff show our veterans and their loved ones, even when the world is turned upside down.