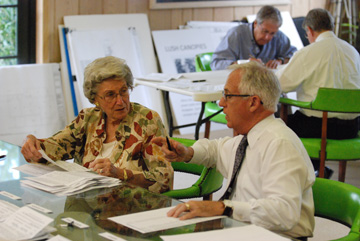 Property owners voted to put overhead electric lines underground, but the margin was much closer than in other coastal towns that approved the expense.
Gulf Stream’s tally was 175 for and 153 against, or 56 percent to 44 percent. Jupiter Island registered 90 percent in favor while Jupiter Inlet Colony had 75 percent support.
“It’s a go,’’ Vice Mayor Joan Orthwein said into her cell phone shortly after Town Clerk Rita Taylor announced the results Feb. 7.
The straw ballots were counted by Taylor, Town Manager William Thrasher, Civic Association President Bob Ganger and Ron Bennett, an accountant with the town’s auditing firm.
“Here’s one for Al Gore,’’ Ganger joked while he helped sort the ballots into 18 piles representing each street in Gulf Stream, from Banyan to Wrightway.
Resident Bob Meisel delivered his vote — in favor of the $5 million project — just a few minutes before the 2 p.m. deadline, adding that he thought he had until Election Day, March 8, to get his ballot to Town Hall.
“We have so few votes here,’’ he said, explaining his confusion over the dates.
The week before, town officials shifted from being neutral about the proposal to stating their full-fledged support. Commissioners voted unanimously to cast six votes in favor of burying the wires for the six parcels the town owns.
Besides boosting property values, underground wires will help protect the town’s signature Australian pines along State Road A1A from being overly trimmed by Florida Power & Light Co. crews, Mayor William F. Koch Jr. said.
“We’ve for the last three or four years had to have an arborist stop in and watch them when they come in so they don’t butcher them to death,’’ he said. “They’re not going to last.’’
Koch urged the audience at a special commission meeting to tell their neighbors the project is in their best interest.
“It makes sense,’’ he said. “You’re investing in your own property when you put the undergrounding in. And it’s also investing in the town’s heritage and what it really is. These trees are very important to us.’’
Ganger praised Koch for showing his feelings at a Civic Association meeting the night before.
“The mayor did this town a great service by standing up, endorsing the project for all the right reasons, with passion,’’ Ganger said. “We’re so used to trying to be very civil, very factual and so forth and so on. There comes a point in time when you have to put a little passion into it. ‘’
Koch and Ganger said condo residents seemed most opposed to the project and questioned why a multifamily building should have to pay any more than a single-family home that took up the same land area.
“Three-fourths of the project is on the street — that is, to bring it to your house,’’ Ganger said. ‘’So really, what they’re getting is what everybody else gets. And the issue is, is that fair? Yes, it is fair. Is it equitable? Yes, it is equitable. Do I want to do it? In their case, a lot of them say no.’’
Gulf Stream’s consultants said the cost to put electric, phone and cable TV wires underground for a typical single-family home is $15,218 and on a condo unit is about $8,500. The bill for Gulf Stream School is $44,200, they said.
Town officials plan to look for 20-year financing plans that could make the amount $600 a year for condos and $1,200 a year for single-family homes.
Work will start in the southern end of town first, followed by the northern section at the end of this year. All of Gulf Stream should be finished by fall 2012, the consultants said.
The project does not include Place au Soleil, which was built with its lines placed underground.