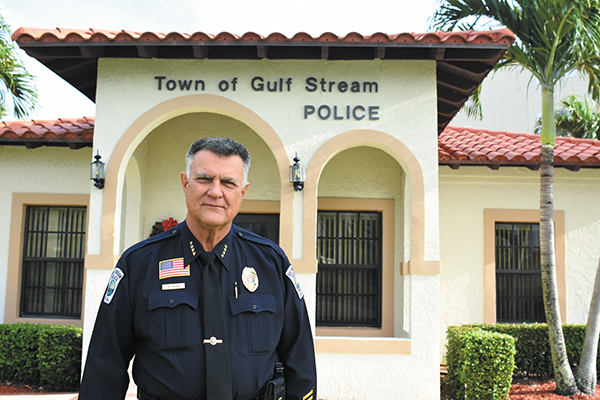 Chief Edward Allen at the Gulf Stream police station, where he has been an officer for more than 28 years. The town’s new police chief hasn’t strayed far from his roots.
Born and raised in Boynton Beach, Lt. and acting Chief Edward Allen was promoted to Gulf Stream’s chief of police at the Town Commission’s Dec. 9 meeting.
“I don’t know if it’s just me, but I feel particularly safe this morning,” Town Manager William Thrasher said as he formally introduced the new chief to commissioners.
Mayor Scott Morgan called it a time “of conflicting emotions” with former Chief Garrett Ward missing from duty since June because of health problems. Ward submitted his resignation effective Dec. 1.
Morgan said he “wholeheartedly” supported Allen’s appointment. “He is a man with excellent managerial skills. He oversees things very well. He communicates very well. He’s loyal to his staff, to the men who serve under him, and he is decidedly loyal to the residents of Gulf Stream.”
Public service runs in Allen’s family. His father, Ed Sr., was chief of the Boynton Beach Fire Department. Allen started out in Boynton’s Police Department in 1981, moved to the Ocean Ridge force in 1986 and to Gulf Stream on June 10, 1988.
“I’m actually the longest-tenured employee in the town,” he said.
He feels fortunate to inherit a 12-person force that has kept the number of crime reports low, but said the figures are deceiving. “You can’t put numbers on what you prevent,” Allen said.
He also said “things are running very smoothly” in Gulf Stream. “I don’t see [making] any major changes at all.”
People in Ocean Ridge know Allen as the Santa Claus at their annual holiday party for the past five or six years. He got the gig through his friendship with then-Police Chief Chris Yannuzzi, who knew that Allen also mounted a Christmas display at his home in Boynton Beach that drew 250-300 viewers. “I’ve only lived in four homes,” said Allen, who now resides west of Lantana.
Watching Allen, 57, take the oath of office from Town Clerk Rita Taylor were his wife, Karen; his parents; his daughter and two stepdaughters; friends; almost all of the Gulf Stream police force; and Ocean Ridge Police Chief Hal Hutchins, who like Allen was a lieutenant before being promoted.
Hutchins called Allen “a great guy” who fits his community. “He’s probably one of the most patient people I’ve ever met,” Hutchins said.
In other business at the December commission meeting:
• Thrasher told commis-sioners he expects Gulf Stream will receive “as much as $250,000” from the recently approved extra penny sales tax in Palm Beach County. The money will be used for road improvements, he said.
• Morgan said the town will advertise in January for someone to replace Thrasher, who is retiring in April. “We anticipate a fair number of résumés,” Morgan said.
The mayor will screen the applications with Thrasher and Taylor, then call a special commission meeting to select the new town manager.