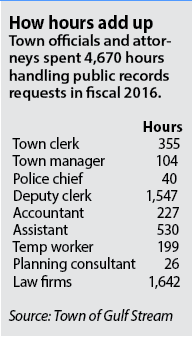 requests for public records in fiscal 2016.
The town’s new staff attorney, Trey Nazzaro, making his first annual public-records compliance report, noted a recent article in The Florida Bar Journal and told town commissioners that Gulf Stream has become a sort of poster child.
“I included that as part of this report because it does reference the town of Gulf Stream and the situation we are dealing with and setting us as an example of intentional misuse of the Public Records Act,” he said.
Nazzaro said Gulf Stream received 387 requests for public records in the 12 months ending Sept. 30 and disposed of all but 13. In 53 cases, the town gave an estimate of how much it would cost to fulfill the requests; only four of the estimates were paid.
Additionally, the town faces 38 active lawsuits alleging noncompliance with the state’s public records laws, he said. The complaints allege delay or error, but none claims intentional misconduct by town officials.
Residents Martin O’Boyle and Christopher O’Hare account for nearly all of the requests and legal actions.
Gulf Stream closes a request when it has been fulfilled, when no deposit has been paid within 30 days of an estimate being provided, or when there is no response from the requestor within 30 days.
The town does not charge for the first 15 minutes of staff time in answering public records requests. The year’s 387 requests amounted to 96.75 hours of “free” research worth $3,870, Nazzaro said.
The numbers are trending downward. In the previous fiscal year the town received 428 new requests for public records. And town employees spent 4,913 hours handling them, compared with 3,002 hours in the latest year.
Those 3,002 hours equal one person working full time for 17 months. The law firms the town uses worked an additional 1,642 hours.
By comparison, Ocean Ridge has received only 24 requests for public records since Tracey Stevens became town clerk in January. Stevens said she did not think her longtime predecessor, Karen Hancsak, kept track but told her the town, which with 1,662 residents is twice as big as Gulf Stream, “hardly ever” received requests.
Town Manager William Thrasher hired Nazzaro in October as Gulf Stream’s first full-time staff attorney, saying the move saved $188 an hour in legal fees. As a paralegal at Town Attorney John “Skip” Randolph’s law firm in 2014, Nazzaro helped the town write its public records procedures.
In other business Nov. 10, the Town Commission learned that former Vice Mayor Robert Ganger had withdrawn his request that Gulf Stream help pay legal fees he incurred fighting a deposition in an O’Boyle lawsuit against the town. In October he requested $2,355, less than a third of what his lawyer charged.
Commissioners seemed poised to reimburse the full amount but delayed a decision to investigate whether that would open his legal affairs to more public records requests.