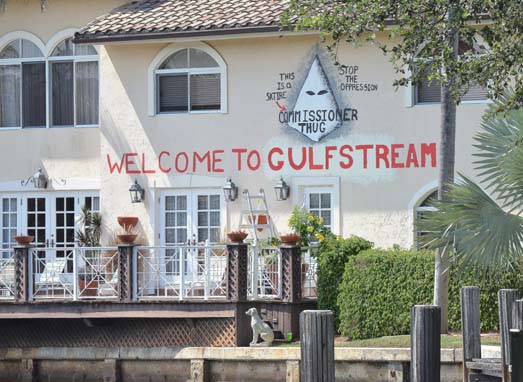 A white Ku Klux Klan-like hood is painted between two upper story windows on his 1983 home, visible from the canal.  Across the hood is lettered “Commissioner Thug.” Lower on the home is “WELCOME TO GULFSTREAM” in massive red letters.

“What I said to them (the commission) was what I plan is a beautiful building and if you don’t like that I will renovate it in a different fashion where I can still comply with the laws of the United States,” O’Boyle said.

O’Boyle, a commercial real estate developer, has also started having a giant gay rights flag painted above his garage on the front of his house on North Hidden Harbour Drive.

Asked if he was trying to embarrass the town commission, he said, “The commission does a good enough job themselves.”

O’Boyle also made a more customary response to the denial of his renovation plan. He filed an appeal Monday in Palm Beach County Circuit Court, asking a panel of judges to overturn the commission’s ruling.

O’Boyle also promised to attend all of the town’s architectural review and commission meetings to help ensure the town codes are enforced on the development requests of others.

“If the mayor wants to enforce the code, I’m a citizen and I will support my mayor,” he said.