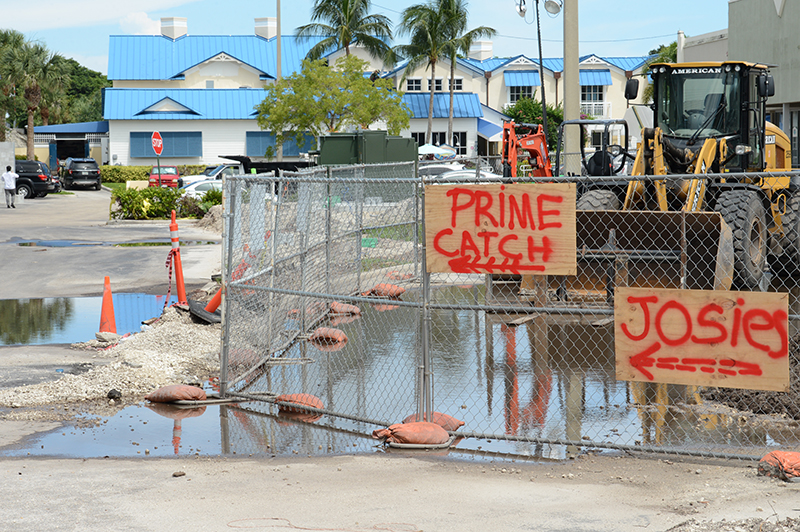 The Prime Catch restaurant in Boynton Beach will close in September while Riverwalk Plaza’s owner rips apart the parking lot to install underground utilities and trenches.
Flooding from heavy rains has exacerbated driving woes in the plaza during construction on ditches where stormwater and sewer lines will be placed.
“When it rains really hard, it affects us more,” said Luke Therien, whose family owns Prime Catch. “The parking lot floods easily.”
During September, the restaurant will do interior renovations. It will reopen in October “with our own beautiful new upgrades for the season,” Therien said.
Drivers entering the plaza’s parking lot from East Woolbright Road can’t reach South Federal Highway restaurants and retailers. They are stopped by barriers placed by construction workers who are installing underground systems for water, sewer, stormwater, wastewater, electric and gas lines for the new apartment complex.
In addition, parts of the parking lot along South Federal and East Woolbright are being raised 18 to 24 inches to accommodate exfiltration trenches to store runoff, said Gary Dunmyer, city engineer.
The South Florida Water Management District requires the trenches to sit above the water table, Dunmyer said. The trenches allow the runoff to ooze through a filter of rocks and enter the groundwater system. Excess water will flow out to the Intracoastal Waterway.
Stephanie Setticasi, who owns Josie’s Ristorante with her husband, said traversing the parking lot is challenging during and after heavy downpours. “Customers are complaining about the difficulty in reaching our restaurant,” she said.
Josie’s plans to stay in its location, Setticasi said, after it could not reach an agreement with the plaza owner to buy out the remaining 10 years on its lease.
Isram Realty of Hallandale paid $9.5 million for the aging center in March 2011 and paid $500,000 extra for a vacant 3.2-acre parcel behind the center. In March 2017, Isram purchased 5.76 acres of mangroves directly south of Riverwalk, adjacent to the vacant parcel and sitting on the Intracoastal Waterway, along with a .13-acre strip of land that connects the vacant parcel to South Federal Highway.
The nearly 10-acre plaza sits at the southwestern base of the Woolbright Road Bridge across the Intracoastal Waterway. The plaza contained a Winn-Dixie grocery store that closed in January 2015.
That closing allowed Isram to redevelop the shopping center to include a 10-story apartment complex. In January 2017, a previous Boynton Beach City Commission approved the 326-unit project despite residents’ objections to the height and mass at the base of the bridge.
Wells Fargo bank and Wendy’s fast-food restaurant own their parcels in the plaza, along with Prime Catch.
Other tenants are Walgreens drugstore, Jo-Ann Fabric and Craft store, Sushi Simon restaurant and Bond Street Ale and Coffee. The two restaurants had been in the Winn-Dixie building. They negotiated new leases with Isram and were moved into the renovated Walgreens building.
A new building on South Federal Highway, just north of Walgreens, will house two tenants.
One is Chipotle Mexican Grill, a fast-casual restaurant chain based in California. It will rent 2,326 square feet this fall, according to the Isram Realty website.
Isram is seeking a tenant for the remaining space.
For Bond Street, customers have complained about not finding a place to park, said owner Phil Van Egmond. “The owner took away about two-thirds of the parking spaces,” Van Egmond said. “We have a very loyal base of customers who always find us.”
The plaza owners are apologetic, Van Egmond said. “But what can they do?” he said. “It’s a necessary evil for the new development.”
The heavy rains have delayed the parking lot work, said Baruch Cohen, chief operating officer for Isram. He visits the project daily.
“We have to stop, cover up everything and then begin again,” he said.
Most of the parking lot work will be finished by December, Cohen said.
In April, workers will start on the apartment building, which will be finished in two years, Cohen said.