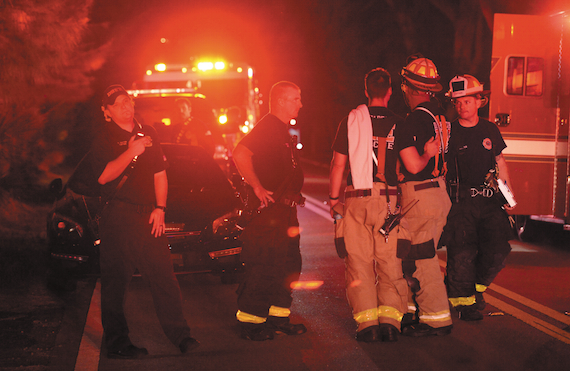 More than 35 firefighters with 14 trucks from Delray Beach and elsewhere in the county responded to a fire at the Gulf Stream estate of Anthony Pugliese on Oct. 29. They contained the fire to the multi-car garage and guest quarters, preserving the main home that was once the Phipps Estate. The Phippses were the founders of Gulf Stream Polo. Jerry Lower/The Coastal Star

A fire at the oceanfront Pugliese estate in Gulf Stream closed down State Road A1A for six hours while Delray Beach firefighters worked to control the blaze and extinguish intermittent hot spots.
No one was hurt in the Oct. 29 fire, which apparently started in a three-car garage between the guest house and the historic mansion. Firefighters did rescue two dogs, Delray Beach Fire Rescue spokesman Kevin Saxton said.
Homeowner Laura Pugliese, who with her husband, Anthony, were driving back from Jupiter, said when the fire alarm company called, she first thought it was a false alarm.
“I think it’s an actual fire, because there’s a lot of 911 calls,” she said the dispatcher told her.
Delray Fire Rescue was alerted at 5:50 p.m.
“When the first units arrived there was significant fire showing,” Saxton said.
Town Manager Greg Dunham said he got to the scene about 7 o’clock. “I couldn’t see flames, but there was smoke fully billowing out,” he said.
Fourteen vehicles responded to the blaze, including Highland Beach’s ladder truck, which Delray Beach operates. The fire was under control in about an hour, Saxton said, but firefighters stayed at the estate until about midnight.
“There were a lot of hot spots,” Saxton said.
Pugliese said an SUV in the garage had a full tank of gas, which probably caused the explosion some people heard.
Ocean Ridge police diverted southbound A1A traffic onto Woolbright Road. Delray Beach police directed northbound motorists to turn around in the parking lot of the Gulf Stream Golf Club.
“We were lucky, very lucky,” Laura Pugliese said. “No one was home, no one was hurt.”
But she and her husband had to cope with having no power or lights. “We slept with all the doors and windows open last night,” she said.
The Puglieses restored the Roaring ’20s mansion rather than tear it down. It was built by a member of Gulf Stream’s founding Phipps family.
An inspector for the state fire marshal’s office was at their home the next day. The fire marshal would take a few days to report on the cause and other details, Saxton said. The next morning Gulf Stream police were at the scene, awaiting a fire inspector’s investigation. Jerry Lower/The Coastal Star