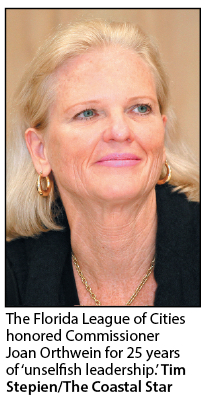 Last month the Florida League of Cities officially praised her for 25 years of “unselfish leadership.”
In a resolution, the league’s board of directors noted that allowing multiple terms in office is the highest compliment voters can give to an elected official.
“The league thanks you for your commitment to public service and for the greater good of Florida’s citizens,” it said in a video presentation on Nov. 13.
Mayor Scott Morgan added a local touch.
“It is her intellect, her honesty, her integrity, her sense of humor that has helped lead Gulf Stream forward through those 25 years on this commission and making this town really one of character and ability that is unique in the state of Florida,” Morgan said.
Orthwein was surprised by the recognition, a late addition to the commission’s agenda.
“Oh my goodness. I don’t know what to say, but thank you,” she said. “It’s an honor to be on the commission. … It’s an honor to be here.”
The league named its honor the Mayor John Land Years of Service Award. Land was the mayor of Apopka for more than 60 years.
The league also presented Orthwein with a 25-year pin to wear.
Morgan said praise of Orthwein for a quarter-century of service was understating her efforts.
“Joan’s legacy is not just 25 years. It’s actually 32. She served seven years on the ARPB, was the chairman of that board before she moved on to the commission,” Morgan said.
In other business, Police Chief Edward Allen reported that two cars were stolen from residents in October and a third was burglarized. Both stolen cars were unlocked and had the keys inside, he said. One was recovered. The town is fighting a rash of stolen vehicles this year.
Allen also introduced Gulf Stream’s 13th police officer, Justin Menard, a 25-year veteran of the Florida Highway Patrol.
The additional officer position was planned to expand police coverage in town, but Allen said another officer resigned a week after Menard started.