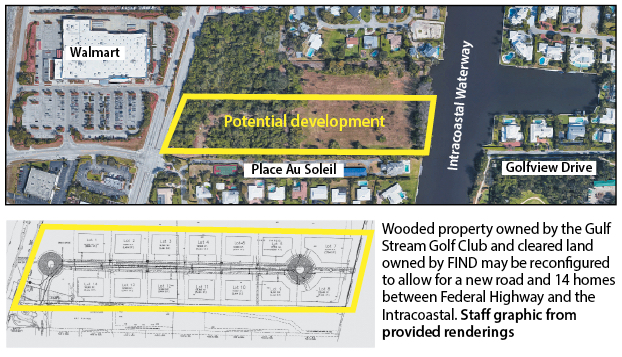 Former Delray Beach Mayor Cary Glickstein is cobbling together a deal that would add a new street to Place Au Soleil with 14 homesites, including two on the Intracoastal.
The Gulf Stream Golf Club and the Florida Inland Navigation District (FIND)would swap acres to create the new development, just north of Place Au Soleil. The developers also hope to buy the homesite at 2900 Avenue Au Soleil but are still in negotiations, Town Manager Greg Dunham said.
In a tentative site plan that Gulf Stream’s land-use consultant is reviewing, the new street is labeled Water View Lane. That drew an objection from Commissioner Donna White, who lives in Place Au Soleil.
The neighborhood’s original developers took inspiration for naming streets from a rainbow they saw while surveying their land purchase, she said. They decided “to name the streets after the colors of the rainbow,” White said, listing Cardinal Circle, Tangerine Way, Canary Walk, Emerald Row, Orchid Lane and Indigo Point.
White said the Water View developers should pick a “colorful” name to go with the rest of Place Au Soleil.
Separately, Dunham reported success in having FIND clear some trees and other growth from its large parcel on the south side of Place Au Soleil after he threatened to take the agency to a special magistrate hearing.
“We’ve been having difficulty with them maintaining the vegetation that comes right up to the fence line,” Dunham said.
In other business in September and October, the town:
• Approved a property tax rate for 2020-2021 of $3.76 per $1,000 of taxable value, the so-called rollback rate that will generate the same revenue that Gulf Stream collected the previous year. Town employees will get a 4% cost-of-living pay raise.
• Promoted police Lt. John Haseley to the rank of captain. Haseley joined Gulf Stream’s Police Department in September 1992, became a sergeant in 2000 and lieutenant in 2016.
• Approved a variance to allow the Little Club to enclose a space on the west side of the clubhouse for an employee lounge and locker room. The lounge will come up to the property line, but was acceptable to all 10 owners at neighboring Las Casitas. Ú