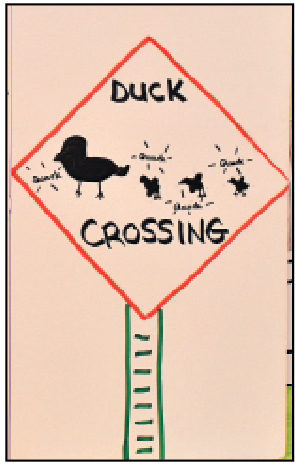 Thanks to the determined efforts of two Gulf Stream School fourth-graders, signs will soon go up on Sea Road and south of the school warning motorists to watch out for ducks.
Armed with a letter of approval from their head of school, Valentina Autiero and Emma Imperatore returned to the Town Commission’s chambers on May 13 after making their initial presentation in March 2020, mere days before COVID threw off the commission’s calendar.
“We are here because two years ago I saw a Muscovy duck get hit by a car on Gulfstream Road,” Valentina said. “I thought the idea to install a duck crossing sign on Gulfstream Road might help.”
The girls wrote letters to The Little Club and two homeowners, seeking buy-in for the placement of signs on Gulfstream Road, as well as contacting the head of school.
“Congratulations on a wonderful idea for having duck crossing signs in the town of Gulf Stream. I applaud your desire to protect our area’s wildlife,” Cathy Abrams, the assistant head of school, wrote on Head of School Gray Smith’s behalf. “We look forward … to finding a place that has maximum visibility.”
The homeowners were against putting the signs at the front corner of their properties, saying that might interfere with backing out of their driveways. Instead, they proposed the school grounds and police station as better locations.
“We thought that was a good suggestion,” Valentina said.
Despite many requests, the girls did not receive a response from The Little Club, which the ducks frequent, Valentina reported.
“We appreciate your support and thank you for your time,” she concluded.
Mayor Scott Morgan, who in 2020 counseled Emma and Valentina to contact the club and the school, applauded their “dedication and perseverance.”
“More importantly, you’re involved in what is our true democratic process, bringing an issue of your concern to a body that can respond to it and hopefully help with that,” Morgan said. “I think it’s an admirable effort by you two young 9-year-olds.”
Added an enthusiastic Commissioner Paul Lyons: “I think it’s a great idea!”
The next step for the girls will be meeting with Town Manager Greg Dunham to determine a final design and site locations.
In other business, commissioners welcomed newly appointed Thom Smith to the dais. Smith replaced Commissioner Donna White, who has her Place Au Soleil home up for sale and is moving out of town.
Commissioners also voiced concern about the condition of Little Club Road, a private thoroughfare that is maintained not by the town but by its owners, The Little Club and two condo complexes — the Hillside House and St. Andrews Club.
“I think it’s an embarrassment to the town,” Morgan said. “Anyone who goes to The Little Club or goes to the St. Andrews tennis courts or visits Hillside House thinks it’s a public road, and it’s just in terrible shape.”
Commissioner Joan Orthwein agreed. “Also on that road they’ve let the landscape grow out far into the road, which I find dangerous,” she said.
Town officials will explore getting the road’s owners to deed their right-of-way to the town.