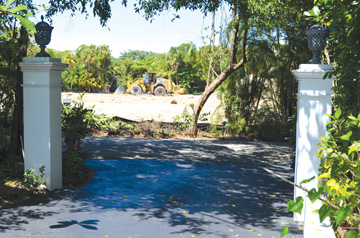 The view of the construction site from one neighbor’s driveway used to be blocked by a banyan tree, vines, shrubs and other vegetation. Jerry Lower/The Coastal Star

Forget the day-in, day-out clank-clank-clank of bulldozers leveling the more than six acres of the former Spence estate. And the clouds of dust? Don’t even ask.
So when a developer chopped down a towering banyan tree on the land he is turning into a six-home subdivision, residents descended on Town Hall.
The tree’s branches spread more than 30 feet from the center in all directions, shading Hidden Harbour Drive, as well as Nancy Touhey’s driveway.
Touhey said an “ear-piercing” chainsaw woke her the morning the banyan was felled.
“I have pictures showing what has happened to the canopy,” she told Gulf Stream commissioners at their April 13 meeting in a Town Hall packed with residents. “The canopy is … most areas are gone.”
Resident Tom Murphy, a lawyer, shared Touhey’s dismay.
“I am familiar personally with how fastidious this town is with something as simple as the color of a door, and yet one of the last, great beautiful parcels of land in this town is a scar right now,” Murphy said.
Developer Seaside Builders LLC promised the Spence property’s Hidden Harbour neighbors it would maintain the canopy over Hidden Harbour Drive to get them to agree to its subdivision plans. It told the town it would leave a 15-foot buffer along the access road rather than the required 3-foot buffer to shield neighbors from the project.
The banyan was not in that buffer, although its branches shaded a large section of it.
Right after the meeting, Commissioner Fred Devitt III, Town Attorney John “Skip” Randolph and Town Manager William Thrasher went to the site to inspect the tree clearing. That afternoon arborist Dave Bodker counted all the trees in the buffer zone to make sure none had been harmed.
In a report to Mayor William Koch Jr. and commissioners, Thrasher said that at a subsequent meeting with town officials, Seaside developer Tom Laudani proposed to add native canopy trees to the area left open by the banyan’s removal once land is leveled in late June. The developer will also pay Gulf Stream for water from a hydrant to keep dust to a minimum. Previously Seaside was pumping from the Intracoastal Waterway.
The canopy was not the only point of contention at the April 13 meeting. Resident Bill Boardman said there is a perception that Gulf Stream is “overly compliant” with the development process.
“We need a revision of these codes. There’s no question about that,” Boardman said.
“We have our hands tied with this,” Vice Mayor Joan Orthwein said. “They [Seaside] did nothing illegal. We followed everything by the book.”
Laudani, through his Harbor View Estates LLC, bought the Spence property for $5.6 million in October. Koch’s real estate firm listed the parcel asking $6 million. Koch recused himself from the subdivision vote. Orthwein, who has an active real estate license with Koch’s firm, also did not vote.
Bob Ganger, chairman of the Architectural Review and Planning Board, said his panel was devising changes to town ordinances on subdivisions, house designs and even “hammerhead” roads. The Seaside project will have a hammerhead road to reduce the number of driveway exits.
“One of the things that we’re looking at is the notion of not permitting a large sub-development to change the contour of the land,” Ganger said.
Representing the Delray Beach Preservation Trust, architect Dan Sloan suggested a historic preservation board be empowered “with the idea of keeping your historic fabric intact and not losing it to overly intense development.”
The home that Seaside razed was built around 1937 by Seward Webb Jr., a grandson of William Vanderbilt, once the richest man in the world. Webb’s widow sold the estate to typewriter heiress Gladys Underwood James.  It was designed by noted Palm Beach architect John Volk.
Residents also complained that the town could better alert them to meetings with important agendas.
“We have to be more informed,” Jim Walton said. “The way that you find out that there’s a meeting is you have to walk over here [to Town Hall] and look on the board. That’s ridiculous. We all have emails.”
“You know what,” Orthwein said, “the commission meetings are always the second Friday of the month,
9 o’clock, always, every month.”