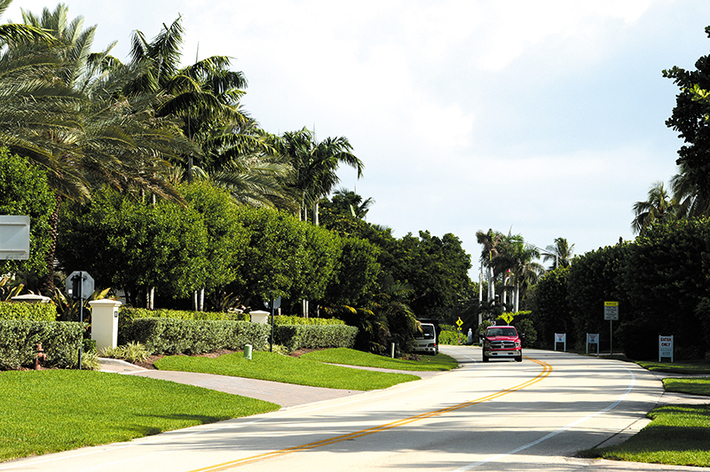 If it looks like something is missing in this picture looking north along the 4000 block of North Ocean Boulevard, it is. Gulf Stream’s undergrounding project got rid of power lines and poles. Photos by Jerry Lower/The Coastal Star

It’s almost over!
Gulf Stream’s signature municipal project — to bury its electric, telephone and cable TV lines underground and remove the unsightly poles and overhead wires — neared an end on Aug. 2, with only two poles still standing, all but closing a tangled chapter of the town’s history that traces its roots to a hurricane in 2005 and endured cost overruns, a federal lawsuit and lots of time.
Town Manager Greg Dunham, who asked visitors to Town Hall if they saw anything different after Sea Road in front of the building was de-poled, was surprised at their reactions.
“A lot of people don’t even notice that the poles are gone,” he said.
Outside auditor Ron Bennett noted a happy coincidence as he delivered the latest town audit on July 8. 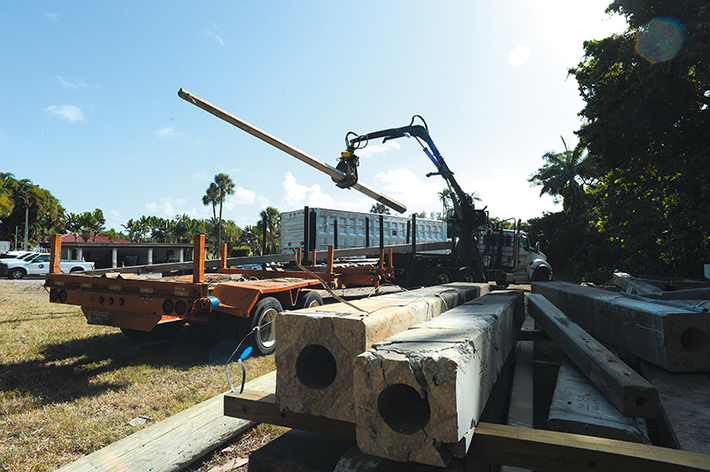 A crew from Blackwood Solutions loaded up dozens of utility poles that had been temporarily stored behind Town Hall.

“The undergrounding loan—it was actually paid off on April 1 I believe, the last payment, so as of now the town has no debt. You’re debt-free,” Bennett said.
Gulf Stream borrowed $2.43 million in 2012 to jump-start the project while it collected property owners’ assessments for the work. Owners of single-family homes paid $11,907 on average, while condo owners paid $7,057 on average, either upfront or in annual installments.
The genesis for the ambitious project was a celebratory lunch and a conversation at the now-closed Ellie’s ’50s Diner in 2005 in Delray Beach, former Vice Mayor and then-Civic Association President Bob Ganger recalled.
The association-sponsored luncheon honored workers from Ohio and Kentucky who were helping restore power to Gulf Stream after Hurricane Wilma struck.
Ganger asked the president of the workers’ firm what the town could do to be less vulnerable to high winds. “And he said bury your overheads,” Ganger said.
What followed was a contentious vote and an even more contentious system of special assessments to pay for the work. Residents approved the plan to bury the utility lines in 2011 and agreed to bear the then-expected $5.5 million cost.
“I honestly believe it was the right thing to do. I believed it when I started the project and I believe it today, but we’ll only find out when we have another hurricane and we’ll see just how well the system can be put back together again,” Ganger said.
Construction was to have begun in May 2012 but didn’t get going until late 2013. The original completion target for the south and north phases of the project was somewhere in the first half of 2015.
Cyclical economic factors contributed to delays and overruns. Coming out of a recession, contractors were looking for work and gave low bids. Material prices also were low. Utility companies downsized their staffs, pushing into early retirement experienced workers who knew how to handle complicated projects.
In 2016 with the national economy rolling again, the cost of most everything had gone up and companies were understaffed. The entire undergrounding project cost $6.5 million. Gulf Stream officials approved spending an additional $510,000 that year from the general budget to underwrite the work.
The project south of Golfview Drive finished in 2018. Work on the second phase, from Golfview north, started in late 2016. At one point, Gulf Stream sued AT&T Inc. to get it to finish burying its lines.
“I don’t think there’s any question. It took longer; it was more expensive than we anticipated. But in the long run it’s certainly going to be worth it,” Mayor Scott Morgan said in July.
The last poles removed were those along State Road A1A.
“As a historian,” Ganger said, “I think every once in a while you ought to step back and say, what did we do, how did we do it and what was the outcome. What we did I thought was extremely well done. The outcome took long, a lot longer than we anticipated.”