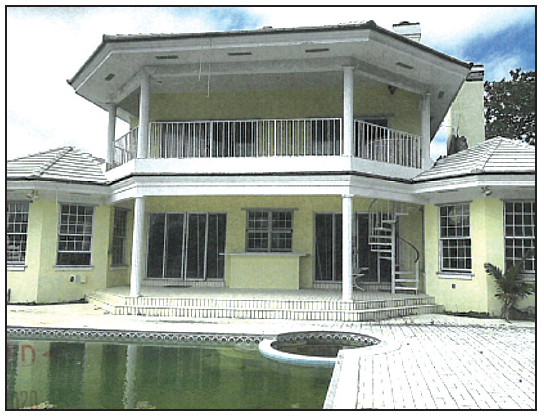 Anthony Turner’s heirs sold the property to Soleil Estate LLC in 2019 after the town reduced liens for code violations from $200,000 to $20,000.
Photo provided

An ambitious proposal to demolish an unoccupied Intracoastal Waterway estate and add the property to a planned 14-home subdivision next to Place au Soleil appears close to falling apart.
The town’s Architectural Review and Planning Board recommended approving changes Feb. 25 to Gulf Stream’s comprehensive plan and zoning classification for almost 15 acres just north of Place au Soleil to allow for the 14 new homes.
But Cary Glickstein, former Delray Beach mayor and president of Ironstone Development Inc., the developer behind the plan, was not optimistic he could seal a deal on acquiring the Turner property at 2900 Avenue au Soleil. It lies between the new subdivision and the rest of Place au Soleil and in effect would add a 15th home to the project and create deeper backyards for some home sites.
The estate includes a house and a large detached garage.
“In addition to title issues, litigation has plagued the property for over a decade,” Glickstein said.
He offered the ARPB two scenarios, one with Ironstone acquiring the property and one without. The board recommended that the Town Commission approve the plan without the disputed property but said Glickstein could amend his application if he succeeds in buying the parcel.
The ARPB also recommended approving a 10-foot setback for backyard pools in the neighborhood. Ironstone agreed to drop its plan for a motion-activated gate to the subdivision.
Bluewater Cove, the new name for the project originally called Water View Lane, will have one street running east from the Place au Soleil entrance to two home sites on the Intracoastal and 12 other lots along the road. The plan calls for a path from the new street leading to an observation deck on the waterway.
Glickstein said Place au Soleil residents he has spoken with support the plan.
“I think most people feel that it’s value added to their community,” he said.
As envisioned, the 14 new homes would add $37.3 million to the town’s tax base and generate almost $140,000 a year in property taxes.
Ironstone changed the development’s name after Town Commissioner Donna White complained that Place au Soleil’s other streets are named after colors.
The acreage is the result of the Gulf Stream Golf Club and the Florida Inland Navigation District swapping land to give both entities parcels stretching from Federal Highway to the Intracoastal. Ironstone will be buying the golf club’s property.
Chet Snavely, president of the Place au Soleil Homeowners Association, already bought one longtime neighborhood eyesore, an abandoned house at 2775 Avenue au Soleil, demolished it and covered the parcel with sod.
Neighbors complained that it and the Turner property were hangouts for homeless people and drug deals.
Glickstein said he anticipated two or three spec homes being built at first, with another two or three following as sales allowed.
If Glickstein can buy the Turner property, he said, Ironstone would relocate pipes that connect a pump house to the golf course and Gulf Stream’s drinking water line a ways north to not interfere with the subdivision. The narrow, west-east parcel also has a multi-vehicle garage on the Turner property that is in disrepair and would be razed.
“The 2990 property has had a tortured past, and in some respects maybe should have never been used for anything other than the public utility that traverses the property today,” Glickstein said.
He praised his design team for its final proposal. “It’s almost a natural extension to what is there,” he said.