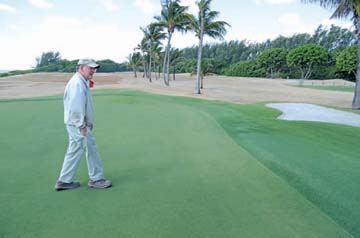 Pete Dye walks across a green at Gulf Stream Golf Club, where he is overseeing renovations. Photos by Jerry Lower/The Coastal Star

Pete Dye took one hand off the steering wheel of his golf cart and pointed to a patch of torn-up ground.
“Pure rock,” he said. “We’re riding on pure rock.”
Dye, the world’s most famous living golf course architect, has been working since April 15 on renovating the back nine of Gulf Stream Golf Club. He’s been a member of the private club, just a few minutes from his Gulf Stream home, for 30 years.
“They didn’t listen to me for 29 years,” he said in pure Dye-speak — straightforward laced with a dollop of self-deprecation.
“Mr. Donald Ross was here one day,” Dye said, referring to the legendary architect credited with Gulf Stream’s original design in 1924. “He staked it, put the greens where they are and the tees where (the members) wanted them. Then he had a contractor come in and build it. They ran into rock and quit — they just put sand on top of it.
“Mr. Ross was smarter than me. He just walked away.” That’s the way Ross, generally considered the patron saint of golf course architects in America, worked on many of the courses that bear his name.
But walking away has never been Paul B. “Pete” Dye’s style. Not from his first 18-hole design in 1962 at what is now Maple Creek Golf & Country Club in Indianapolis to these days as an 87-year-old living legend who still rides bulldozers and backhoes to get the results he wants.
A member of the World Golf Hall of Fame, Dye first came to Delray Beach in 1932.He has designed some of the world’s most revered (and feared) golf courses, including TPC Sawgrass Stadium Course, Harbour Town Golf Links on Hilton Head Island, Crooked Stick Golf Club in Carmel, Ind., and Teeth of the Dog at Casa de Campo in the Dominican Republic.
And he and his wife of many years, Alice, designed one of the nation’s top public courses, The Ocean Course at Kiawah Island, S.C., site of the 2012 PGA championship.
“Jack Nicklaus, Tom Fazio, Greg Norman... they draw up plans and get somebody to build their golf courses,” Dye said. “I build everything I do. I’ve never drawn up plans in my life — don’t know how.  I just build it and hope it has 18 holes and a driving range when I’m done.” 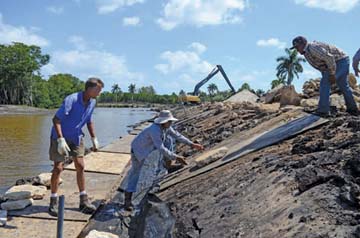 Rocks are placed along a pond to improve shore stability.

At Gulf Stream Golf Club — one of the state’s more prestigious private golf clubs — Dye is following up on last year’s renovation work on the front nine with similar work on the back nine. That is, he is improving drainage, moving tee boxes, rebuilding bunkers and recontouring the greens, most of which he termed “unplayable.”
“The greens were so tilted back-to-front that the ball would just roll off them,” Dye said.
He also cut down the sea grapes along the 18th fairway to open up expansive views of the Atlantic Ocean, and replaced the saltwater-tolerant Paspallum grass on the fairways and tee boxes with Celebration Bermuda grass that holds up well to stress and drought.
“We use more fresh water here than salt water,” Dye said. 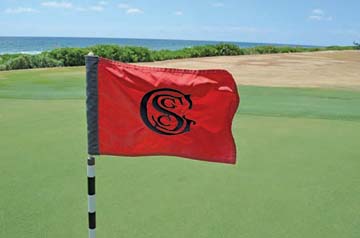 The club’s logo flies on the flag at the oceanfront  putting green.

When it’s complete in July, the renovated Gulf Stream Golf Club course will play 7,100 yards from the tips (back tees) — more than 300 yards longer the previous routing. The front tees will play from 5,000 yards and the course will maintain its five sets of tee boxes.
Best of all, it will be pure Pete Dye.