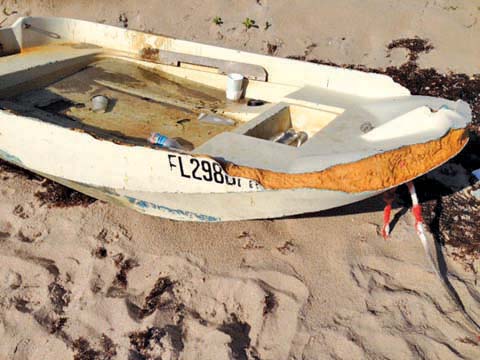 After 13 years afloat, this Boston Whaler dinghy made its way

from the Turks and Caicos to the beach in Gulf Stream.

The little dinghy was lost during a storm in the Turks and Caicos in 2001 and, miraculously, ended up pretty near its home port in Palm Beach County 13 years later.

Where the 9-foot, 9-inch Boston Whaler has been in the last decade is a mystery. The only thing that’s absolutely certain is that the boat proves the Boston Whaler company’s claim of  “unsinkable.”

The dinghy turned up on the beach in the 1500 block of North Ocean Boulevard in Gulf Stream on Jan. 14. Gulf Stream Police Investigator John Passeggiata got a call, and he went to check it out.

The boat was pretty beat up, and part of the Florida registration number was missing on one side. On the other side of the boat, registration numbers also were missing and faded, but he was able to put them together and track down the owner. 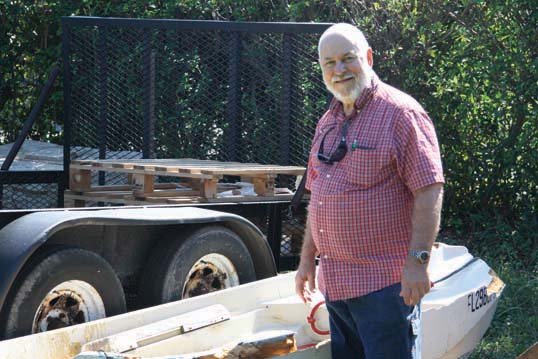 “He was really glad to hear we found the boat,” said Passeggiata.

The boat’s owner, Larry Conway, who lives in North Palm Beach, was thrilled to get Passeggiata’s phone call. “I just loved that boat.”

He remembers vividly how he lost it. On the night of July 31, 2001, he and his wife, Kiki, sailed their 37-foot sailboat, the Raptor, into a storm in the Turks and Caicos.

“It was really bad, with 10-foot seas. We towed the dinghy. It was probably about 75 feet behind. I had it shackled on pretty good. We were in the Caicos Passage when I saw we had lost it. It was about  2 o’clock in the morning. I brought it down to idle and I looked for it with a light. But I knew I would never find it.”

“It was more than a dinghy,” he said about the boat he had for 15 years. “We would go out snorkeling, spearfishing. I actually took it out on the ocean to fish on the reefs.”

When Conway finally saw it, the boat was resting on the grass next to the Gulf Stream police station. “I stayed awake all night thinking about it, how I was going to fix it up. I had all kinds of plans for it. When I saw it, I was devastated,” he said.

He left the boat, which is beyond repair, at the police station.

“The police said they would take care of it,” he said. “I felt like I signed a death warrant. It was pretty sad.”