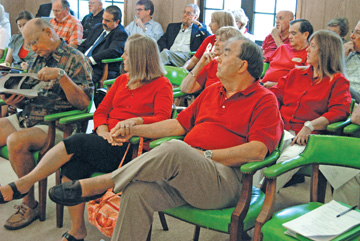 By Steve Plunkett
Wearing red, Gulfstream Shores residents kept up their assault on what the town wants them to pay to put utility lines underground even as town commissioners set June 30 for a public hearing on the plan.
“Tell your consultants to go back. There are other options,’’ said lawyer Marcie Nolan, representing Gulfstream Shores’ 54 condominium units at the commission’s May 13 meeting.
Nolan repeated that Gulfstream Shores wants the special assessments to be based either on lot size or lot frontage. That would drop per-unit costs, now $6,118 at the complex, to $328, while single-family homes would pay $15,402 on average instead of $10,000, she said.
Edward Johnson, president of the time-share owners at recently annexed Gulfstream Manor, also spoke against the assessments, as did Sophie Bent of Hillside House.
“A lot of our property owners feel the unfairness of the methodology used,’’ Bent said of her 12-unit condo.
At least one complex, the 23-unit Somerset, supports the proposal.  “The Somerset voted 100 percent for the methodology you all have chosen,’’ said Nancy Wibbelsman, whose husband is president of the condo association there. “We believe that it was fair for each individual to bear an equal burden because each individual or each family that owns the unit is going to be sharing this burden equally.’’
Bob Ganger, president of the Gulf Stream Civic Association, said while affected property owners polled in a straw ballot approved the project 56 percent to 44 percent, Gulfstream Shores “from the very beginning’’ was opposed to the assessment methodology.
“If one excluded Gulf-stream Shores, who voted overwhelmingly against, the total for the town would have been 65 for, 35 against,’’ Ganger said. Condo residents also disputed variations among condo assessments. Bill Dugmore of Gulfstream Shores said the average unit there is 750 square feet; Wibbelsman told him condos at the Somerset are 1,200 to 1,300 square feet.
“That’s approximately twice the size of a unit at Gulfstream Shores, and you’re being assessed the same amount of money that we are,’’ Dugmore said.
“But you’re benefiting the same amount I am,’’ Wibbelsman responded.
John Caldwell, who lives at the Golf View Club, said his building’s seven units are being assessed $8,200 each, more than 300 other properties on the list.
“With all due respect to our friends from Gulfstream Shores, their average is $6,200 for all of the condos,’’ Caldwell said. ‘’We’re paying $2,000 more than that for our tiny little building, and I just think that’s on its face unfair.’’
Before the public commented, Gulf Stream’s consultants reviewed the safety and reliability of underground electric wires and defended the fairness of the assessments. Nolan at two April meetings had charged that the project’s only benefit was improved aesthetics.
Consulting engineer Danny Brannon said he did not know of anyone being electrocuted by an underground system, but said the same is not true of overhead wires. He also said converting to underground is so important to Florida Power & Light Co. that the utility will pay 25 percent of the project’s costs. Brannon said he also has discovered an electric cable under the Intracoastal Waterway connecting Gulf Stream to the mainland. That should negate fears of power outages caused by downed overhead wires in Briny Breezes or Delray Beach, he said.
Lee Evett of Willdan Financial Services said his firm is the only one in Florida to have completed assessment methodologies, in Jupiter Inlet Colony and the towns of Palm Beach and Gulf Stream, as well as 11 others in California.
Only one was challenged in court, and Willdan was upheld, he said.
“There isn’t a more fair system under Florida law for assigning costs of a particular project than an assessment methodology,’’ Evett said, noting that Palm Beach, like Gulf Stream, has a number of condominiums.
Meanwhile, Gulfstream Shores wrote state Sen. Ellyn Bogdanoff requesting that Florida pass a law declaring condominium complexes a single parcel rather than multiple units when special assessments are imposed.
Mayor William F. Koch Jr. then wrote Bogdanoff to say it would be ‘’unfortunate’’ to take legislative action based on “incomplete information’’ about Gulf Stream’s plans. Gulfstream Shores has other ways to challenge the project, he said.
“The established process for local government legislative decision-making has not been completed and should not be cut short,’’ Koch wrote.
The Town Commission approved an ordinance 4-0 authorizing the special assessments and scheduling the public hearing. Commissioner Chris Wheeler was absent.
“We’ve listened to all your thoughts today and we’re considering them and will consider them,’’ Koch told the condo residents in the filled commission chambers.
Town Clerk Rita Taylor said the hearing, which starts at 9 a.m. June 30, is akin to a “board of equalization,’’ where residents can present grievances over assessments for possible adjustment.
After the hearing, the commission can adopt, reject or modify the assessment roll.
Notices of the hearing had to be mailed to the affected property owners 30 days in advance, Taylor said.
If approved, the assessments will show up on property tax bills in November. The proposed project does not include Place au Soleil, which was built with underground
lines.

Note to readers: Gulf Stream’s June 30 public hearing on special assessments comes too late to be covered in our next edition. Please go to www.thecoastalstar.com for updates on the town’s underground project.