As O’Boyle, O’Hare ponder next moves,

Gulf Stream’s RICO suit against residents Martin O’Boyle and Chris O’Hare was laid to rest in a Miami federal appeals court June 21 when a three-judge panel upheld a lower-court ruling to dismiss the case.

Jonathan O’Boyle, Martin’s son and a co-defendant in the town’s suit, hailed the decision as a victory for open government and citizens’ rights. 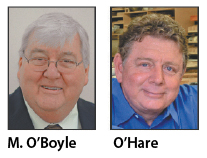 “For public records laws, this is great news — worthy of dancing in the streets,” said O’Boyle, a lawyer affiliated with the family’s law firm. “The net effect (is) a civil right does not exist if the government can sue you to stop the exercise of that right. The social pressure, personal struggle and expense of being a defendant against a government who possesses virtually limitless funds will crush all but the most zealous, tenacious, wealthy and educated.”
The town’s federal class action alleged that Martin O’Boyle used a group he founded called the Citizens Awareness Foundation to extort settlements from thousands of frivolous public records requests made to Gulf Stream and dozens of other municipalities and businesses across the state — communities including Miami, Bradenton, Cutler Bay and Fernandina Beach.

The RICO (Racketeer Influenced Corrupt Organizations Act) action claimed hundreds of thousands of dollars in settlements were funneled to The O’Boyle Law Firm in Deerfield Beach.
A year ago, U.S. District Court Judge Kenneth Marra threw out the suit, ruling it did not meet legal standards under the RICO statute.
Gulf Stream Mayor Scott Morgan, a lawyer, said appealing that decision made sense because the town’s suit was “a case of first impression” that had little legal precedent to guide the court.
“We’re not particularly surprised because winning appeals is very difficult,” Morgan said. “We thought there was less than a 50-50 chance but it was definitely worth taking.”
He said town attorneys have no regrets about filing the RICO suit because it “shined a light” on O’Boyle’s activities and drew attention to the problem of public records abuse.
“It generated a lot of publicity and as a result we received a lot of information on the scheme O’Boyle hatched,” Morgan said. “We were able to gather a lot of evidence that will help our cases in the state courts. Also, to my knowledge, since the RICO suit, O’Boyle’s firm hasn’t filed another public records case against anyone in the state. We truly believe what they did constitutes racketeering.”
The judges of the 11th U.S. Circuit Court of Appeals appeared to empathize with Gulf Stream’s predicament but couldn’t support the racketeering case before them. While the pile of records requests from O’Boyle and O’Hare might have placed an unfair burden on the town, the judges found the behavior didn’t satisfy requirements for action under RICO.
“The allegations in the plaintiffs’ complaint paint a frustrating picture,” said the 13-page opinion, written by Judge Charles Wilson and joined by Judges Robin Rosenbaum and Jill Pryor.

Besides Gulf Stream, the Wantman Group, a West Palm Beach engineering firm, was a plaintiff in the suit because of a dispute over a public-records request it received from the O’Boyles as a government contractor.
O’Hare has argued that he never should have been named as a defendant in the case because he was not affiliated with The O’Boyle Law Firm, and the hundreds of public records requests he made to the town concerned legitimate issues that were not linked to the O’Boyles.
O’Hare said the RICO allegations have been damaging to his marriage and his company, Pineapple Grove Designs, which produces stone-sculpted architectural ornaments. He said the town overreached in suing him under a federal statute that is meant to combat organized crime.
“I can’t begin to tell you how debilitating this RICO accusation has been for me and my family,” he told the Town Commission last year.
“The RICO suit was a legal misadventure concocted by Mayor Morgan and attorney Robert Sweetapple. There was absolutely no evidence to support the town’s wild claims about me,” O’Hare said after the appeals court decision.
“There should be no doubt that the town and the town’s attorneys conspired to punish me for seeking redress in the courts and to stop me from requesting public records. This is not the purpose of government and it can’t go unchallenged.”
Jonathan O’Boyle said the defendants are considering seeking compensation for damages to their businesses and reputations from the RICO suit, as well as recovering legal fees from the case that “have to be north of $1 million for defending the action.”