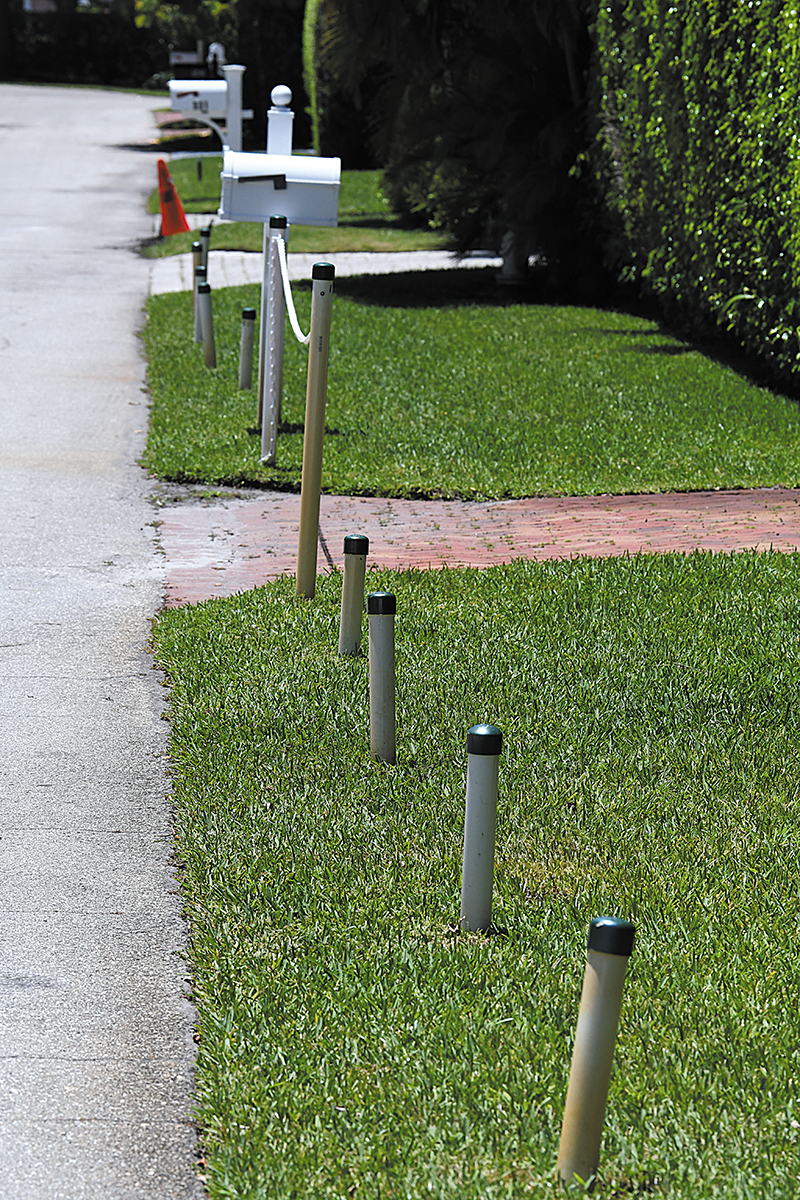 Mayor Scott Morgan wants homeowners, especially those in the town’s core area, to remove the green stakes and concrete pyramids and buttons they’ve put next to roadways to keep vehicles off the grass.
“The number of stakes, primarily stakes, has increased so substantially that it presents a real hazard to our residents. We have many more kids in the neighborhood, riding bikes, jogging, running, whatever,” Morgan said at the Town Commission’s May 10 meeting.
The obstructions, which people might think are in their front yards but are actually in the town’s right of way, also cause flat tires on emergency vehicles and detract from Gulf Stream’s “aesthetic appearance,” the mayor said.
A 1993 ordinance stated that nothing but low landscaping and mailboxes could be within 6 feet of a road’s pavement, Town Manager Greg Dunham said. In 1999 commissioners decided that residents near an “active construction site” could install white or dark green, capped PVC pipe 36 inches above grade and 2 feet from the road’s edge, Dunham said.
“The pipes shall be removed immediately following the issuance of the [certificate of occupancy] at the construction site,” the policy says.
In 2004 another ordinance made it unlawful for anyone “to place and/or maintain any obstructions within the right of way of the town without first being given authority in writing by the town,” Dunham said.
Morgan said, “The reason why we have the stakes and the reason why they have grown in popularity is because our streets are so narrow. They’re really single-vehicle streets.”
Students from the Gulf Stream School on a field trip to the commission chambers offered suggestions, including a limit on the size of delivery and landscaping trucks.
Commissioner Paul Lyons said he did not want to consider widening all the town’s streets.
“I live on Polo Drive,” he said. “I think it still maintains the feeling that we’d like to have. In other words, it’s not too wide.”
But, Lyons said, “We need to eliminate the obstructions.”
Commissioner Joan Orthwein, who also lives in the core area, said most stakes are not even needed. “People just got on the bandwagon,” she said.
With commissioners’ blessing, Morgan sent a letter to residents after the meeting, pointing out the safety hazard and “unsightliness” of yard stakes.
“If you are one of the residents with traffic obstructions on the grass right of way, please remove these items from your yards as soon as possible,” Morgan wrote.
The town will fill in ruts and place new sod on yards damaged by vehicles. Dunham will also contact landscaping companies to see if they can send smaller trailers into Gulf Stream.
In other business, commissioners:
• Extended for five years the town’s contract with Delray Beach Fire-Rescue. Delray Beach can raise its rates each year by the Consumer Price Index or by 5 percent, whichever is higher.
• Approved a revised landscaping plan for 3400 Polo Drive that preserves a large ficus tree at the front. Kevin and Michelle Clark are building a two-story, 7,406-square-foot Bermuda-style home there.