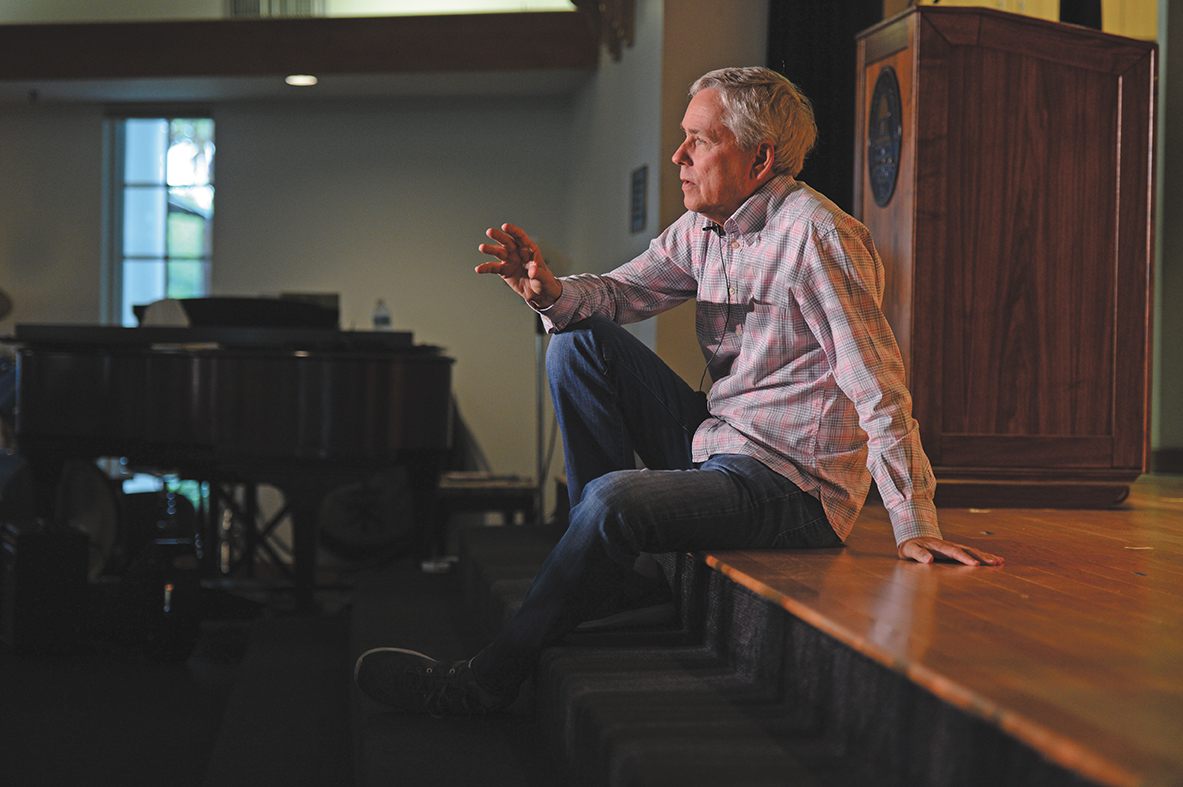 at Gulf Stream School advice on how best to become a writer.

“The job of a writer is to entertain,” the writer began. “If you can’t tell a story and keep people turning a page, you’re unemployed.”
And then Carl Hiaasen entertained them.
For more than an hour, the best-selling novelist and Miami Herald columnist sat on the edge of a stage in the Gulf Stream School, telling tales and dispensing advice to about 100 upper school students.
“When I was your age,” he recalled, “I used to keep journals. We called them diaries back then, and I would write down stuff that happened every day. Sports and fishing. It taught me every single day to type out a few paragraphs. Your writing gets better.”
He gave them a peek at how his books are made. He cracked sly jokes and named his own favorite writers. He shared tales from his boyhood, growing up in suburban Fort Lauderdale back in the early ’60s. He told them about the neighborhood bully who terrified him on the way home from school back then.
And like those witty and preposterous Florida yarns that have put his novels for both adults and kids on best-seller lists, Hiaasen seasoned the entertainment with a serious message, this time about the importance of reading and writing.
“The internet is all about content,” he reminded the students, “and if you can’t write, you can’t contribute to the content of the internet. You have to know how to communicate, and the best way to learn how to write is to read like crazy. I know a lot of writers, and they were all readers as kids.”
He began to write at the age of 6, Hiaasen recalled, when he was given a typewriter.
“A typewriter is a machine that looks a lot like a computer,” he said with a straight face, “and I thought, What job can I get where I get to write every day?”
And so in time he became a reporter at The Miami Herald, where Christie Evans, a fifth-grade English teacher at the school, was once a colleague. Hiaasen’s visit to the school was a personal favor.
“Working at newspapers helped me in writing,” he said. “Every day it’s something different, and you have to write fast. You had deadlines, and editors who were brutally honest. There’s no such thing as writer’s block in a newsroom. If you have writer’s block in the newsroom, you’ll get unemployment block.”
And then he entertained their questions.
Asking a writer to name his favorite book is like asking a dad which of his kids he loves best, he warned. “But for sentimental reasons, I like Hoot because it’s the first book for kids and I didn’t know if I could do it.”
What Hiaasen calls his “kid books” have one-word titles — Hoot, Flush, Chomp — to distinguish them from his “grown-up books” — Tourist Season, Basket Case, Bad Monkey — so they won’t be confused.
“I didn’t want some kid picking them up by accident and reading them,” he said. “Plus the cover artists like shorter titles.”
His favorite writers? J.D. Salinger. Kurt Vonnegut. Thomas McGuane. Graham Greene. And of course, the late, great Florida storyteller, John D. MacDonald, whose Travis McGee mysteries took place right there in Fort Lauderdale. “That was the first time I’d read a published book where I knew all the streets,” he said.
And if Hiaasen hadn’t become a writer?
“I don’t know,” he mused. “At one point I wanted to be a vet, but then I found out you had to take science classes.”
His old neighborhood in Plantation, out on the edge of the Everglades, inspired Hoot, the Newbery Medal-winning novel about kids who fight to save some burrowing owls from a developer.
“Now the whole area where I grew up is under concrete and asphalt,” he said. “In real life, we weren’t able to save the owls.”
The owls are gone, but so is the neighborhood bully who used to make his life a nightmare: “After a while I got to be taller than her and she left me alone after that.”
The students’ hands were still raised high, questioners begging to be recognized, when Evans stepped forward to announce that time was up. A line formed in front of the stage, and Hiaasen started signing copies of his books.
Some of the students carried his kid books and a few the grown-up novels. Pierce Silver, 13, a seventh-grader from Boynton Beach, got his copy of Sick Puppy autographed.
“To Pierce,” Hiaasen wrote, then scrawled his signature and a personal message.
Like the titles of his grown-up novels, the message was only two words:
“Keep Reading.”