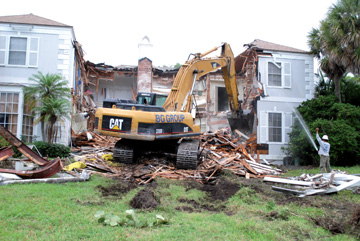 The Spence estate is no more.
A demolition crew razed the 74-year-old house in late November, keeping the property on track to become Gulf Stream’s first subdivision in recent memory.        Seaside Builders LLC won approval Nov. 10 to replat the 6-acre-plus estate into six roughly 1-acre home sites to be known as Harbor View Estates.
The developer also was given permission to take until Dec. 15 to demolish the home after pleading that the project was stalled first by the Architectural Review and Planning Board’s decision in July that Seaside and its neighbors work out their differences, then by the Town Commission lacking a quorum in October. But it didn’t need the extra two weeks.
Mayor William Koch Jr. recused himself from the issue because his real estate company listed the sale with a $6 million asking price, as did Vice Mayor Joan Orthwein, who has an active real estate license with Koch’s firm.
New Commissioner W. Garrett Dering, appointed to Chris Wheeler’s seat after Wheeler sold his home and left town, joined Commissioners Fred Devitt III and Muriel Anderson for a series of 3-0 votes.
Project architect Gary Eliopoulos said concerns from neighbors, town staff and the architectural review board had led to significant changes in the proposal, among them a so-called “hammerhead” entry road to the new homes rather than access on Hidden Harbor’s road, along with a 10-foot landscape buffer on the west, north and east and a 15-foot buffer on the south rather than the town’s 3-foot requirement.
“We made sure that the pristine state of this property that you see today remains intact after this development is done,” Eliopoulos said.
Also, he said, the retaining wall around the former estate will meander around large trees to preserve rather than move them and is higher at the ends of the hammerhead to shield neighbors from new residents’ headlights.
“The fact is that a plat of this size and nature most likely will never occur again,” Eliopoulos said.
Still, neighbors to the south denounced the project as an unwelcome subdivision.
“This is a beautiful piece of property and one that we’ve cherished. It’s filled with all sorts of wonderful little animals and birds,’’ said Nancy Touhey, who has the first driveway on Hidden Harbor’s access road. “I do feel that six houses is way too many.”
Scott Morgan, who recused himself when the architectural board considered the proposal, also decried “six long rectangular-shaped lots that will house six long rectangular-shaped houses” in the estate-home neighborhood.
“This is perfectly acceptable in subdivisions in other places,” Morgan said. “You’ll see them in Ocean Ridge, you’ll see some in Delray Beach and Highland Beach, and you’ll see plenty in Boca Raton. But there are no subdivisions in Gulf Stream.”
But Martin O’Boyle, who lives just west of the Spence property, said developer Tom Laudani’s promise to keep the tree canopy on the access road and other changes were “such a win” for Hidden Harbor.
“From a personal point of view I’m tickled,” O’Boyle said. “What he has done is, he has preserved the values of my property, my neighbors’ and my friends’.”
The property and its British Colonial home have a distinguished list of owners.
Seward Webb Jr. bought the acreage from financier E.F. Hutton in 1937, then had noted Palm Beach architect John Volk design the house. Hutton had bought the land from the Gulf Stream Realty Co. in 1926.
Webb was a grandson of William H. Vanderbilt, in his time the richest man in the world; Webb’s wife, Gertrude, was the daughter of a New York City mayor.
Typewriter heiress Gladys Underwood James bought the estate in 1957 after Gertrude Webb was widowed, then sold it to John Caddell II, a third-generation shipyard operator in Staten Island, N.Y., and his mother in 1972.
The Caddells sold it 18 months later to Edmond and Regina Spence. Regina Spence died in December.
“Obviously we’re losing one of our treasured homes in this community,” said Bob Ganger, chairman of the architectural board.
Eliopoulos said he has consulted with the Delray Beach Historical Society and the Palm Beach Preservation Foundation and will give the town an architectural record of Volk’s creation.