A TV fishing host goes in search of a secret love child. An African warrior finds adventure on that war-torn continent. A hurricane tears through a tiny oceanside trailer park. And a Palm Beach County firefighter recounts his real-life memoirs.
While some of us walk the beach, surf, sail or play golf, others stay inside, patiently scribbling and pecking, writing and rewriting, turning out books.
This year, four ambitious local writers saw their efforts published. Here’s a peek:

Weed Line: A Shagball and Tangles Adventure, by A.C. Brooks. 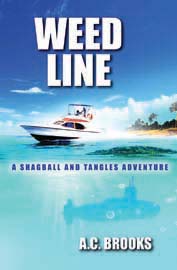 Shagball and Tangles are finally leaving Lantana.
In their first two adventures, Foul Hooked and Dead On The Dock, Shagball, the TV fishing show host, and his vertically challenged sidekick Tangles, the former Elvis impersonator, hung out at the Boynton Beach Marina and The Old Key Lime House restaurant.
In their third outing, Weed Line, author A.C. Brooks sends his heroes to St. Croix, St. Thomas and St. Martins as they scour the Caribbean to track down Shagball’s deceased aunt’s secret love child.
Along the way, they mix it up with a corrupt Virgin Islands senator, two Colombian drug lords and a submarine full of cocaine.
“The books are really more humor than anything else,” says Brooks, a Lantana resident. “There’s action and a little bit of romance because the ladies like that. Shagball’s girlfriend, Holly, is a former computer consultant and marina owner. She’s a strong character.”
Brooks is prolific. His first novel was published in 2010, the second in 2011 and the latest in April. A fourth, Deep Drop, will be out in the spring.
“Learning to write takes a lot of time,” Brooks says. “You just need to get up and do it. I’m a procrastinator like everybody else. I might go weeks without writing — especially in the summer when the fishing’s good. You have to treat writing like a job. Get up and find a way to keep the story going even if you’re stuck.”
Originally from Gates Mills, Ohio, Brooks has lived here for 20 years and sells commercial real estate when he’s not chronicling his characters’ adventures on their boat, the Lucky Dog.
“I try to do most of the writing during the day and juggle my real estate work in between,” he says. “When business picks up, I get less time to write, and then I’ve got my wife, Penny, pushing me. She’s my running editor and screens each chapter to make sure I don’t get too crazy.”
Weed Line is available through amazon.com or at the Old Key Lime House in Lantana, Main Street News in Palm Beach and Hand’s Stationers in Delray Beach.

The Honeyguide, by James Gardner. 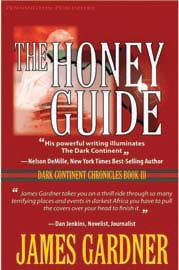 When James Gardner visited Africa for the first time in 1968, he marveled at all the golf travel bags in the airport.
And then he realized they weren’t golf bags. He had landed during the Rhodesian Bush War, and those were body bags.
Gardner fell in love with that troubled continent anyway, and during 25 more visits over the next 45 years he’s brought home to Ocean Ridge the inspiration for The Dark Continent Chronicles, a trilogy of geopolitical thrillers.
“My hero is named Rigby Croxford,” Gardner says. “He’s a white Rhodesian who’s like a Navy SEAL, but a SEAL on steroids.”
In the first novel, The Lion Killer, Croxford was hired to rescue an American tourist on safari from Congolese rebels.
In The Zambezi Vendetta, Croxford finds himself leading five spoiled American teenagers on a photo safari.
And this year has brought The Honeyguide, with Croxford visiting America to defend his brother-in-law, a television newscaster caught up in a sex scandal.
The series has drawn praise from Palm Beach mega-seller James Patterson, who says, “I have seldom come across such fine, descriptive writing in a thriller.”
Born in Albany, Gardner came to Florida in 1947. In 2003, he retired as a senior vice president with Smith Barney to devote his time to writing.
“My most productive time is 9 to 3,” he says. “By 3 I’m wasted, and I go play golf or fly a plane. You come to it the next morning and it has to be completely edited. What sounds good at 3 p.m. is pretty bad at 9:30 in the morning. Writing books is mostly rewriting, but I really enjoy it.”
An avid golfer, scuba diver, sailor and pilot, Gardner will visit Borneo in March, “to see the Komodo dragons and orangutans” — then to Europe in June for the 70th anniversary of D-Day.
And he’s already at work on the first volume of a second trilogy.
“My hope is that some day a movie will be made of The Lion Killer,” he says.
The Dark Continent Chronicles are available exclusively through amazon.com.

On the Edge of Dangerous Things, a novel by S. Snyder-Carroll. 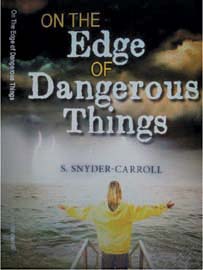 On Dec. 31, 2007, Suzanne Snyder-Carroll officially retired after teaching high school in New Jersey for 30 years.
The next day, Jan. 1, 2008, she sat down in her Briny Breezes trailer, looked out at the Intracoastal Waterway and started writing a novel set in a trailer park called Pleasant Palms.
“It is Briny Breezes, and it’s not Briny Breezes,” Snyder-Carroll says of the trailer park in On the Edge of Dangerous Things, a cautionary thriller that unfolds in the equally fictional town of Destination, Florida. “Pleasant Palms is fictitious.”
Let’s hope so!
Snyder-Carroll’s debut novel begins when a hurricane jogs off-course and rips the trailer park apart. And then it gets darker.
Hester Murphy, a young English teacher, was drawn to Alexander Murphy, fell in love and now finds herself slowly sensing her new husband is not all he appears to be.
“It’s a breakdown, breakup story,” Snyder-Carroll adds. “Someone dies, and whether or not it’s a murder or an accident is really part of the suspense. It’s a cautionary tale for young women, a song of lament for older women and an eye-opener for men.”
On the Edge of Dangerous Things is the first in a planned trilogy, and Snyder-Carroll is already hard at work on Vol. 2, tentatively titled Collecting.
“I get up in the morning and I run, usually anywhere from 3 to 6 miles,” she says. “Then I take a quick shower, eat some food and write until 3 p.m. Then I go to the beach and read.”
Since leaving teaching, Snyder-Carroll says, she’s been rediscovering the classics she first read in college. Thoreau. Tolstoy. George Eliot, and her favorite, Nathaniel Hawthorne.
“Hawthorne was my inspiration,” she says. “In all his novels he has a female protagonist — like Hester Prynne in The Scarlet Letter — who’s a dark lady — with an empathy for women who’ve had a tough time.”
For more information, visit www.snydercarroll.com or amazon.com. A lot of little boys dream of growing up to be firemen.
Christopher Teale Howes did it.
From 1976, when he joined the Del-Trail Fire Department as a rookie, until his 2007 retirement as a district chief in Fire-Rescue’s Battalion 2, Howes fought fires in Palm Beach County.
And then he moved to Armathwaite, Tenn., and wrote a memoir about that life.
“The book is a quick read,” Howes says. “At the beginning of each part there’s an essay titled ‘On The Job’ that’s an in-your-face look at what it’s like.”
Born in Maine, Howes was working at Ken & Hazel’s, his father-in-law’s Delray Beach restaurant, when some friendly firefighters who ate there urged him to try out for the department.
His book recounts the formation of Palm Beach County Fire-Rescue in 1984, and the tremendous growth of the county’s fire-rescue service in the decades since.
“It’s an inherently dangerous profession,” Howes says, but also an inherently misunderstood profession, and he hopes Hot Zone will give readers a more realistic vision of the job.
“The biggest misconception is that we sit around the station all day waiting for a call,” he says. “That’s doesn’t happen any more. If we’re not running calls, we’re training. Everybody there is a medic now as well as a firefighter, and keeping up with those skills is a constant struggle.
“To give you a sense of how busy Palm Beach County Fire-Rescue is, in the year I retired, we had more than 50 fire stations with 1,500 personnel, and ran 112,000 calls throughout the whole county.”
For more information, visit www.kithowes.com or amazon.com.