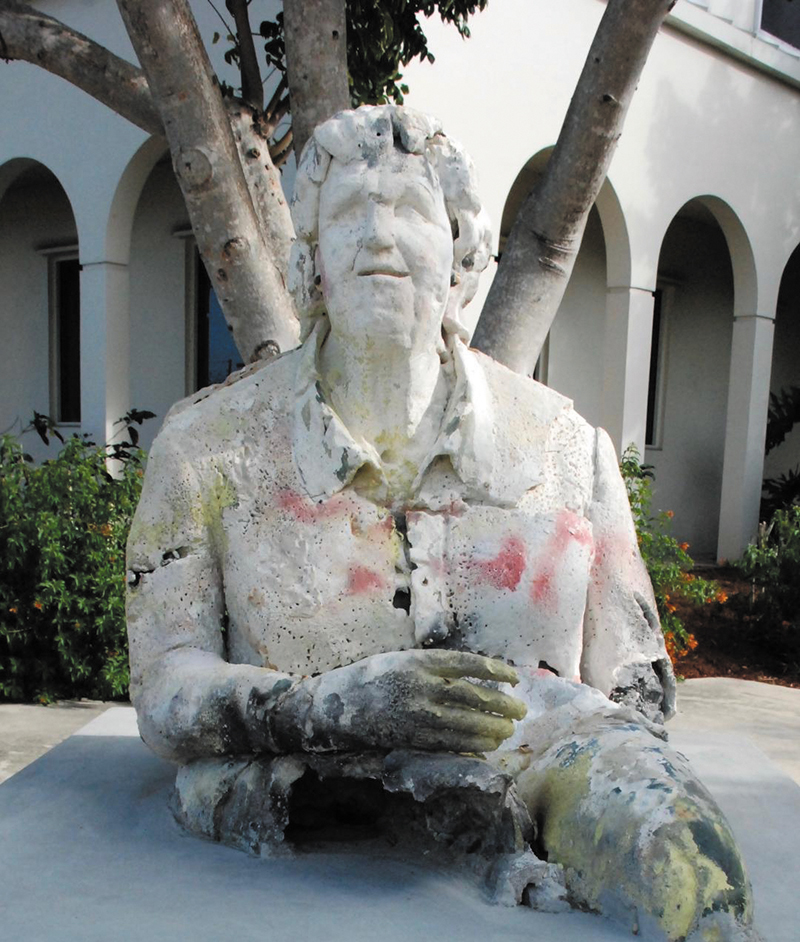 When Are You Coming to Visit? ­­— which spent eight years on display in Boynton Beach — was designed to have a limited lifespan because it depicted an old woman. Photo provided 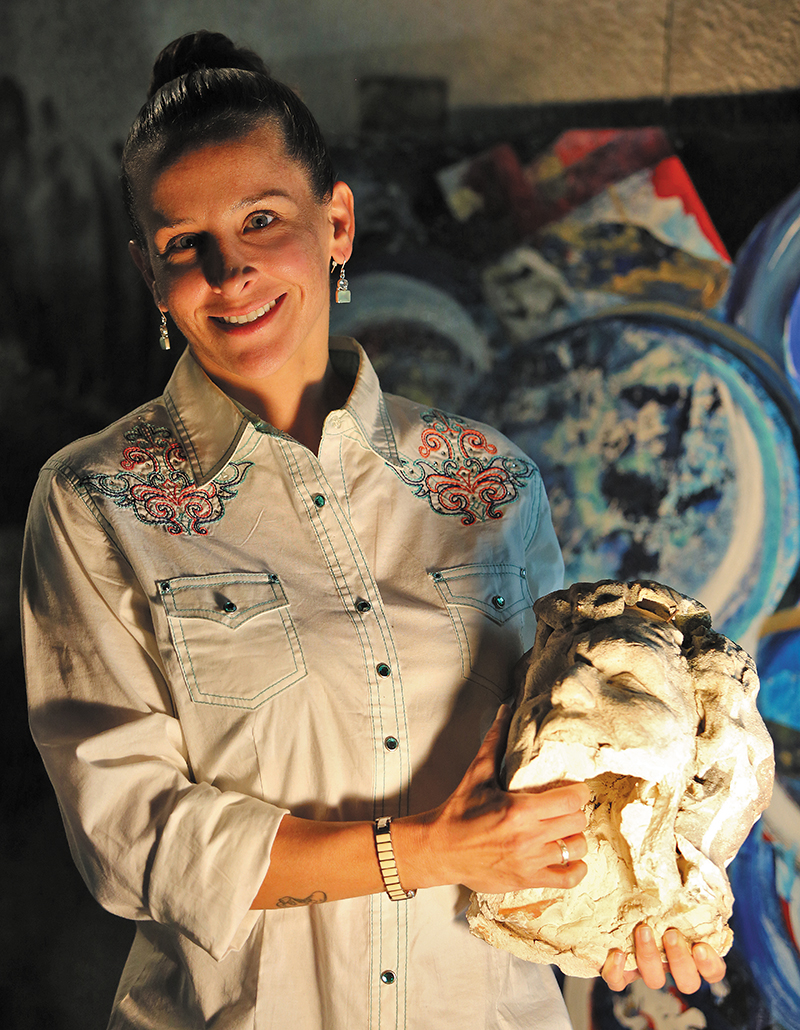 Artist Melissa Markowitz holds part of her crumbling work on the night it was decommissioned. Tim Stepien/The Coastal Star

A cadre of art aficionados gathered between warehouses in the Boynton Beach Arts District to say goodbye to the old woman who made her home behind Boynton Beach City Hall for eight years. She was an ordinary woman, by design, but not a real one. Still, onlookers shed real tears at her farewell ceremony.

The woman was an unglazed ceramic sculpture, a public art piece called When Are You Coming to Visit? (aka The Old Woman). Her creator, Lake Worth artist Melissa Markowitz, says the piece depicted an old woman who “waits and waits for someone to come visit her and nobody comes. As time passes, she crumbles.”

That is precisely what happened to The Old Woman.

“With the Town Square’s redevelopment project, public artworks were either relocated or decommissioned,” she says. “Other pieces have been placed in storage. The Old Woman was not an artwork that could survive relocation and served its purpose.”

In talking about the sculpture, Markowitz said this:

“Everything ages with time — loved ones, ideas, passions and goals. My sculpture is a reminder for us not to procrastinate and remind us what was formed before us.” 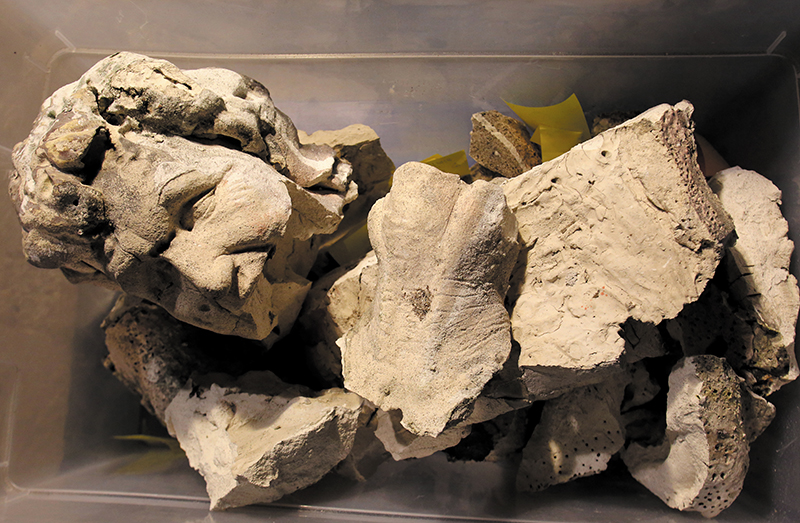 The pieces of When Are You Coming to Visit? rest in a storage box. The decommissioned sculpture’s remains will be buried on the grounds of Boynton Beach’s new town square.

On the evening of the farewell ceremony, Nov. 17, the sculpture, shattered into dozens of pieces, could be viewed in a plastic storage box. Markowitz, who donated the work to the city in 2010, invited everyone to send off the sculpture’s remains with written statements on sticky notes that will eventually be buried with the remains within Boynton Beach’s new town square.

“Write down your forgotten dreams and goals to start anew and encourage everyone to live their life to its fullest potential,” the artist said during the gathering. 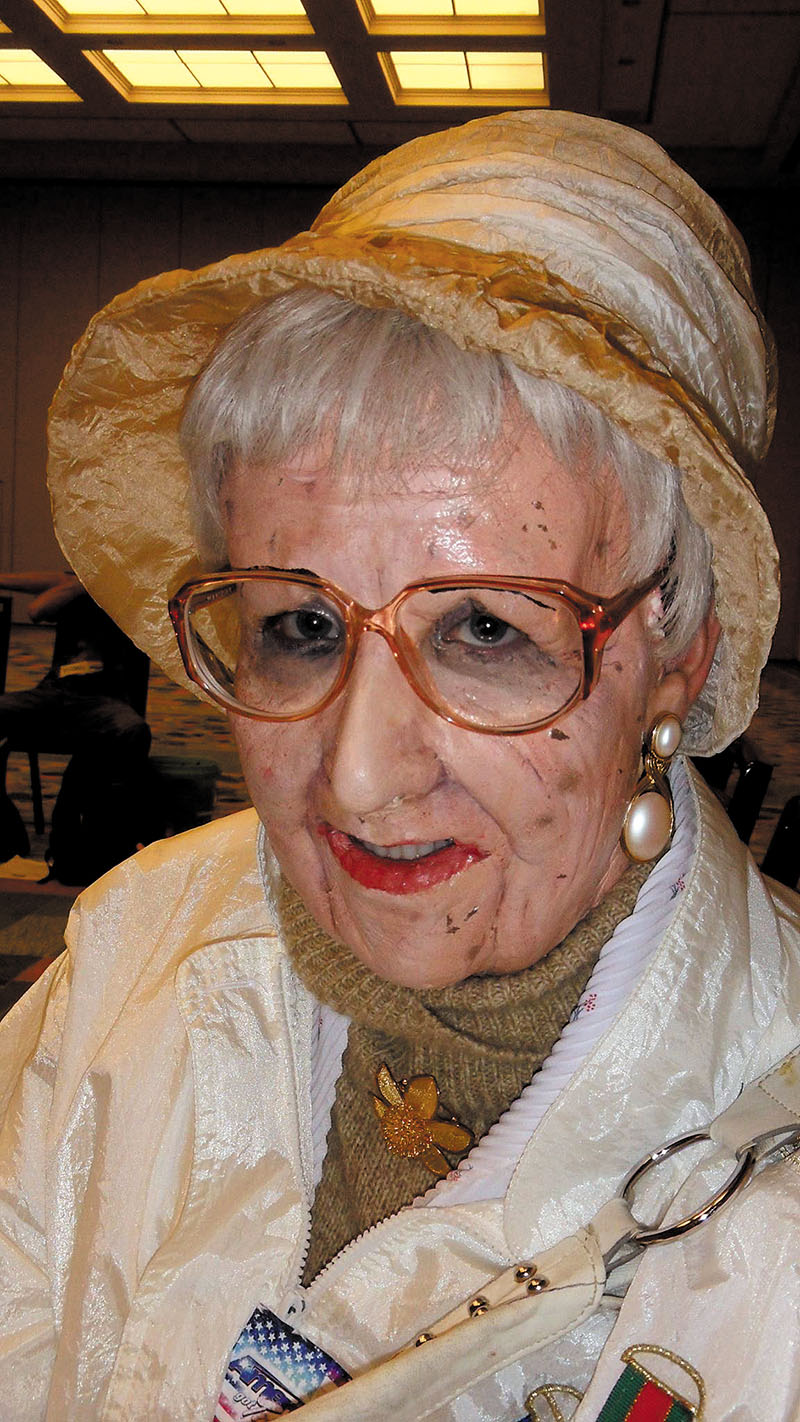 Sculptor Melissa Markowitz, then 26, was booed offstage when she appeared in costume as an old woman on America’s Got Talent. Photo provided

A performance artist who studied at Appalachian State University, Markowitz, 34, researched how society treated the elderly by dressing up as an old woman and immersing herself in the community. “People didn’t pay attention to me,” she says.

Months after When Are You Coming to Visit? was dedicated in Boynton Beach, Markowitz again dressed up as an old woman and auditioned for America’s Got Talent. “I was booed off the stage,” she remembers.

When word of The Old Woman’s decommissioning was announced on Facebook a few months ago, people who had been moved by the sculpture expressed dismay.

“I wish she could be saved,” one woman wrote. “Why isn’t she being relocated?” asked another. Some wondered why she couldn’t be moved to the senior center.

But “everything about this sculpture was carefully thought out,” Coles-Dobay says. The artist wanted the sculpture placed in an out-of-the-way location so that people would need to go out of their way to find it. “She wanted to have a piece that would decay over time.”

Not all public art is made to last and this was one of them, Coles-Dobay explains. “Even in getting the artwork off the pedestal, it crumbled.”

There is no doubt that Markowitz’s short-lived work resonated with people.

Coles-Dobay and others monitored the sculpture since it was installed. Over time, the sculpture aged through the seasons, and that affected the colorization of the sculpture’s surface.

During the rainy seasons, mold grew. Plants sprouted in the cracks and crevices. Ants and bugs found a home in the sculpture’s cavities as the ceramic expanded.

“One day, the public works director brought her hand to my office,” Coles-Dobay says. “It had fallen off.”

No one rushed to glue it back on. The Old Woman was, after all, destined for decay. “She had a public arts DNA,” Coles-Dobay said with a laugh. “But she did have many visitors.”

Coles-Dobay once discovered a bag of groceries in the sculpture’s lap. “It had decaying food in it, so it was discarded. A fresh bag with emptied cigarette cartons and grocery containers were then placed in her lap. Occasionally, a soda or beer can was placed in her hand. When it was cold, someone gave her a jacket to stay warm. Another time, a ball cap was placed on her head.”

Coles-Dobay suspects that many street people sympathized with The Old Woman.

“This sculpture provided a call to action that was realized by visitors once they read the plaque and understood the artist’s intention,” she said.

“Ephemeral art poses a deeper cathartic experience for the viewer as well as the artist,” he said. “Whether the work is in your private collection, in a public art space or even in [the] art studio of its creator, a connection is made — a relationship of sorts between viewer and object. The loss or termination of that union between the two will at best thrust the viewer into a state of joy for having the benefit of the prescribed time, at worst into a deep melancholic state. It is akin to the experience of a eulogy of an elder in one’s family.” 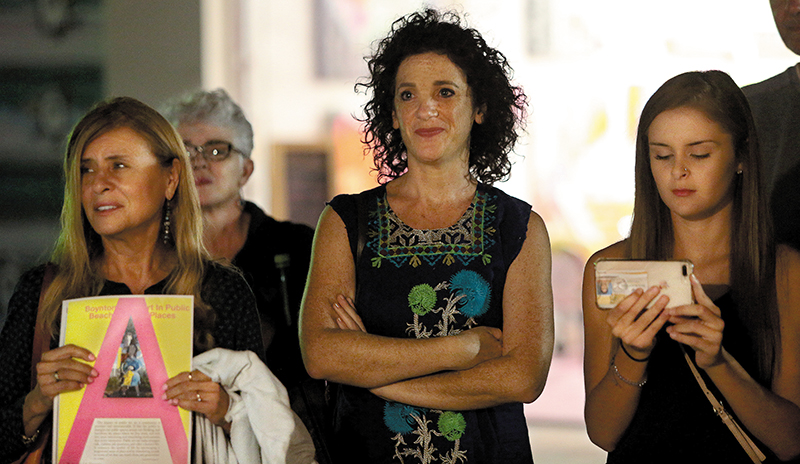 Connie Markowitz of Parkland (the artist’s mother), Lianna Slater of Delray Beach and Lauren Blodgett of Boca Raton view the decommissioning ceremony of the sculpture When Are You Coming to Visit? Photos by Tim Stepien/The Coastal Star

Among those who gathered to bid farewell to the sculpture was Kim Weiss, chairwoman of the Boynton Beach Arts Commission.

“So often we attend events celebrating art in the new, launching phase, but it’s a rare occasion to acknowledge the end of an artwork’s life,” Weiss says. “When Are You Coming to Visit? evoked emotion as it stood next to City Hall and evoked even more at its disassembling ceremony. The artist, Melissa Markowitz, brought tears to our eyes as she explained the significance of her work.

“I’m pretty sure everyone standing in that circle could draw a personal connection to something — or someone — in their own lives or family who we wished we were more attentive of. When art evokes emotion, we know it’s working.”

Once the new town square is complete, the sculpture will be buried on the grounds. Those who remember visiting When Are You Coming to Visit? will be able to pay respects at her final resting place.

Boynton Beach, which has become known in recent years for its kinetic art displays, has more than 80 public art pieces, some of them part of development projects. For more information, visit boyntonbeacharts.org.

Tags: art, boynton beach, decommission, public art, when are you coming to visit
E-mail me when people leave their comments –
Follow