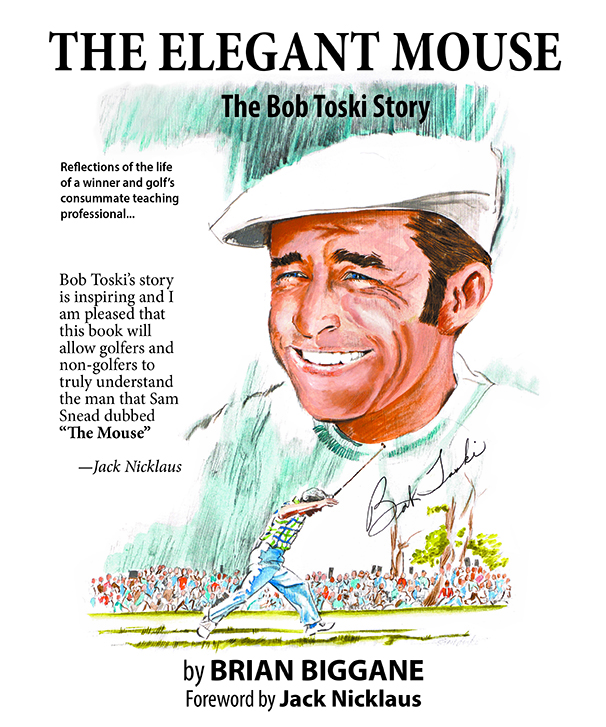 Except for one season on the old PGA Tour (1954), Bob Toski was an average player. But Toski’s golfing life, which spans some 85 years and counting, is far from average, as we discover in Brian Biggane’s new book, The Elegant Mouse: The Bob Toski Story, which details the life and times of one of golf’s great teachers and gentlemen.
Biggane details Toski’s path from hitting balls as a youngster at Northampton Country Club in Haydenville, Mass. (he was one of nine children, whose mother died when he was 5) to the World Golf Teachers Hall of Fame (1990) and the PGA Golf Professional Hall of Fame (2013).
Along the way Toski, who lives in Boca Raton, competed and traveled in the early days of the PGA Tour with the likes of Ben Hogan, Sam Snead and, later on, a swashbuckling young player from Latrobe, Pa., named Arnold Palmer.
Nicknamed “the Mouse” by Snead because of his 5-foot-7-inch, 118-pound frame, Toski took home his biggest check  — $50,000 — for winning the 1954 World Championship of Golf.
“He was a good player, but for a very short time,” said Biggane, a retired 35-year veteran of The Palm Beach Post.
The Elegant Mouse is full of stories and pictures of Toski’s days competing and socializing with golf’s elite. As much as the book is a look into the life of one of golf’s most important figures of the past 65 years, it also shines a light on a long-lost era of American sporting life.
Golf insiders will love the book for Biggane’s painstaking research into Toski’s career as an average PGA Tour player (five victories in 19 seasons) and for some 60 years as one of the world’s most famous golf instructors. Toski, it can be argued, was golf’s first superstar instructor — a man who paved the way for the likes of David Leadbetter, Butch Harmon and Hank Haney.
In the book’s foreword, the legendary Jack Nicklaus (a North Palm Beach resident) tells of how Toski — born Robert John Algustoski in 1926 — reminds him of his fabled coach, Jack Grout. Each, the Golden Bear writes, “pounded away’’ at the fundamentals of the game.
Among Toski’s students: a child prodigy named Judy Torluemke. As Judy Rankin, her married name, she became one of the best and classiest players of all time.
“I was his first successful student,” Rankin told Biggane. “And there have been a lot since.”
Toski also is credited with bringing to the U.S. a young British golf instructor named Martin Hall, whom he helped get a job at St. Andrews Country Club in Boca Raton. Hall now is one of the game’s leading instructors, a fixture on The Golf Channel and director of instruction at The Club at Ibis in West Palm Beach.
“Bob worked with thousands of people across the country and around the world,” Biggane said. “Most people who know something about golf know a little bit about Bob. But most of them don’t know his big story.”
After reading The Elegant Mouse, they’ll know Toski’s big story and, more important, they’ll know the man who helped shape golf as we know it today.

For sale locally at Gulfstream Pharmacy in Briny Breezes.