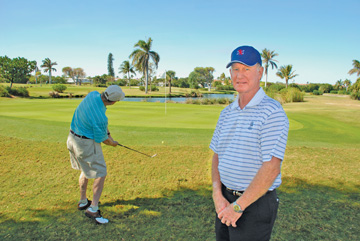 With 40 years of experience at Disney World, the Ocean Reef Club
and the Atlantis Country Club, Jim Simon has settled in at
St. Andrews Club. Photo by Kurtis Boggs

Jim Simon and the St. Andrews Club are a perfect match. Each is classy, understated and comes with a fine history. The club, with its 18-hole, par-54 golf course, was founded in 1971 and has become one of the area’s most popular winter destinations for not only golf, but also games such as bridge, backgammon, tennis and croquet.

“Jim went to Palm Beach Gardens but I couldn’t do that,” Simon said from behind his desk inside the St. Andrews pro shop he and his wife, Pat, own and operate. “I was broke and needed a job.”

Simon found a job 40 miles from Orlando and light years away from golf. He started working as a tour guide at the Kennedy Space Center.

“It was during the launches to the moon, so that was fun and exciting,” Simon said.

For the next three years, Simon played golf “for fun,” and in 1971 heard about this new place in Orlando called Disney World. He was hired as the equivalent of an assistant professional and later would help his fellow Disney golf professionals get into the PGA Apprentice program — the first step to becoming a full-fledged PGA professional.

“It was fun — a great opportunity to learn the Disney system,” Simon said. “I still go back to some of those lessons I learned.”

For example, Simon said, “They do things right; they don’t cut corners. Cleanliness and neatness is their forte. That’s the No. 1 things people comment about. And customer service, making sure their guests are happy.

“They’re there to serve the customers and make it as pleasant as possible. That’s a philosophy I’ve tried to carry through my career.”

St. Andrews Club, nestled just off A1A near Gulf Stream, has approximately 300 members, most of whom are there only during the winter months. The course and other amenities are open year-round, but services, such as the golf pro shop and food and beverage, are only open during the winter season.

“We have a great membership. That’s the key,” Simon said. “And I teach quite a bit during the season. My philosophy is I try to help each individual with their specific needs — try to make them feel like they have better opportunity to hit fewer bad shots. That gets them to enjoy the game and feel as though they’ve improved, even if it’s just a few shots here and there.

“That’s why golf is such a great game. It can bring so many different abilities together and be in competition with the handicap system. I think that’s what makes golf fun.”