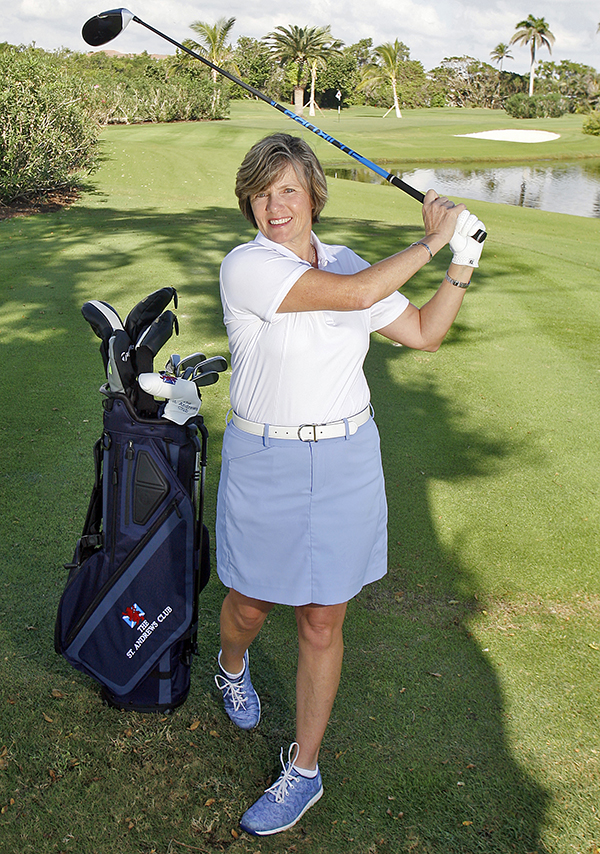 A strong teaching pedigree and a familiarity with members from her time at a club in Connecticut proved to be key assets when Amy Carver earned the job as head golf professional at St. Andrews Club.
Carver, 55, replaces Jim Simon, who retired.
A native of Meridian, Miss., and graduate of Mississippi State, Carver brings an expansive resume to the par-3 St. Andrews course, which includes working under Craig Harmon at Oak Hill in Rochester and Mike LaBauve in Phoenix, both of whom are listed among Golf Digest’s Top 50 teachers.
She’s also familiar to several members of St. Andrews who spend their summers at Wee Burn Country Club in Darien, Conn., where she had worked from 2009 prior to taking on her first head professional position.
“I wanted to come back to South Florida, so it was a nice opportunity,” said Carver, who previously also spent five years at Mariner Sands in Stuart.
“Then I came to the club and it’s very laid-back here; there are certainly rules, but it’s a very relaxed atmosphere.”
Carver interviewed at the club in early April and was hired a month later.
“There was a lot about her background that we liked,” general manager Robert Grassi said. “Some of our members had experience with her, and she came across very strong. There were many reasons: Her whole demeanor, she’s very optimistic, her status as a PGA professional — they were all part of it.”
A fitness management major at Mississippi State, Carver began her career at Belle Meade Country Club in Nashville. Her quest to earn her PGA card brought her to Mariner Sands, and members there helped her move on to Oak Hill in 1993, where she stayed through 1995, when the course hosted the Ryder Cup.
She took a couple of sabbaticals from golf, working in the restaurant business and selling pharmaceuticals for Upjohn, but the game kept drawing her back. She made stops at Stonecreek in Phoenix, Maidstone on Long Island, Colonial in Memphis and another go-round at Oak Hill, this time from 2003 to 2009.
Carver learned about the St. Andrews opportunity while at Wee Burn; with another MSU grad, Charley Crell, already on board as greens superintendent, it seemed a good fit.
“Everything I heard was ‘You’re going to love the people,’” she said. “And I’ve certainly not been disappointed. The golf course is a great golf course, Charley works hard to keep it in good condition, and it’s challenging.”
Carver has mostly taken a wait-and-see attitude toward putting her imprint on the golf program as she anticipates the busiest season after the holidays.
“It’s important to see how things operate, to know what works well and what I’d like to change,” she said. “There’s a beautiful course that gets used a lot in the morning but not in the afternoon, so I want to get more use out of it. The wonderful thing is you can play 18 holes in 2 1/2 hours.
“It’s wonderful to be at a course associated with” Pete and Alice Dye, she added. “I’ve been fortunate enough to meet them, and it’s an honor to be at a course they designed, because they’re so respected in the golf design community. It’s very cool to be here, to see them out riding around and still interested in what’s going on.”