Third-grader Phoebe Condon is the picture of concentration as she lines up a shot. Ryan Fenton, a fourth-grader at Gulf Stream School, hits an iron at The Little Club range.

He has played golf for about three years. After the practice session ends, the students gather, some holding hands,

for the quarter-mile walk back to Gulf Stream School.

As club pro Wanda Krolikowski hauled several sets of undersized clubs from the bag room at The Little Club in Gulf Stream on a recent sunny late afternoon, a cluster of children appeared in the distance, marching down the No. 4 fairway on their way to the driving range.
Skipping, jumping and clearly excited to be outside after another long day in the classroom, the group — all students from Gulf Stream School, ranging in age from 7 to 10, first to fourth grade  — soon spread out across the range, grabbed clubs, balls and tees and launched into a range session.
“The school actually approached me about it a couple of years ago,” Krolikowski said before fanning out to give individual instruction to each of nine junior golf wannabes. “It’s worked out great; I think even better than we expected.” 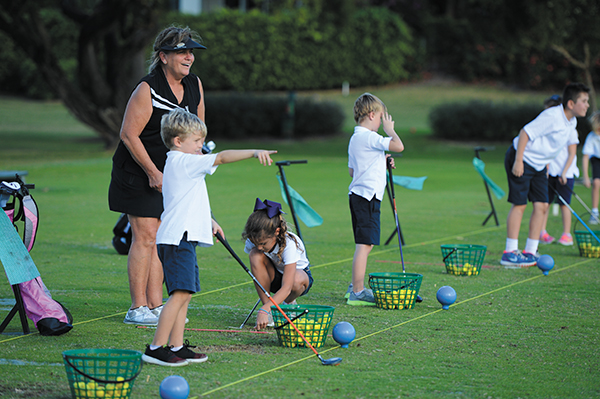 Many, but not all, of the students’ parents are members at The Little Club, and the youngsters say the most enjoyable part of the exercise is that they see enough improvement to encourage their parents to bring them along when they play a round.
“This helps me a lot,” said Ryan Fenton, a 9-year-old fourth-grader who said he’s been playing about three years.
“I practice at least three times a week, and my handicap is about a 20 on this course. I come out and play 18 (holes) with my dad.”
Eight-year-old Phoebe Condon, a third-grader, already has set high goals for herself. Asked how good she thinks she can be, she replied, “As good as my dad. No, better than my dad.”
That will take a while. Fenton, clearly the best of the group on this day, has enough control over a sand wedge, which he says is his favorite club, that he can flip shots toward a natural bunker about 50 yards away and almost make them stick. Many of the others swing and alternately connect and miss the balls, all of which are teed up to improve the chances of contact.
There is plenty of banter back and forth, and much of it brings smiles to those within hearing range.
“That tee is very unlucky,” one girl comments after several poor hits.
“Oh my God, you should have recorded me!” another cries out to a photographer who was looking the other way.
Gulf Stream School art director Holly Pemberton, who is the chaperone on this day, watches one of the smallest boys swing a driver and says, “It’s like the weight of the club throws his whole body backward.”
Krolikowski had predicted some students would start losing interest after a time, and sure enough, water breaks and bathroom breaks become the norm about halfway through.
Krolikowski said the number of students who turn out for the twice-weekly lessons depends largely on the schedules of their parents.
“One reason some of the parents like the program is they don’t have to pick them up until 4:15, which gives them a little more time at work or whatever,” she said. “It really is a part of their after-school program, and it’s more than just playing in the playground. They come here and learn golf, so it’s more beneficial.”
Twice a year Krolikowski puts on what she calls a “golf-a-rama,” a daylong event with several skill competitions — closest to the pin, a six-hole putting contest and a three-hole scramble — followed by a barbecue with pictures and prizes.
“I limit it to 16 teams, which is 16 parents and 16 children, with complimentary food and drink,” Krolikowski said. “And the parents don’t have to be members. I give the Gulf Stream School top priority, and then I open it up to our members. We fill it right up and they have a great time.”
Soon enough, Pemberton checks her watch and sees it’s time to head back. Worn out by the exercise, the students line up and trudge the quarter-mile back to campus.
“A lot of these kids come to my summer camp, and we have Thanksgiving and Christmas camps too,” Krolikowski said. “Our junior program is growing; we had 13 at my Christmas camp and I was like, ‘Oh, my gosh.’ My main goal is to let them have fun while learning the game, and that seems to be working.”