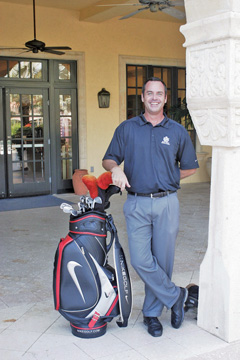 Mike Trinley is one of those guys average golfers shake their fists at. Sure, Trinley is personable and accommodating, but consider the first time he played nine holes of golf: He shot 45. And that wasn’t until he was a sophomore at Florida State University.

If there is any consolation, “It went south after that — 55 and 65,” said Trinley, the head golf professional at the Boca Raton Resort & Club.

That was sort of Trinley’s mantra throughout high school as an all-around athlete, who despite growing up in Boca Raton (although he was born near Pittsburgh), never gave golf a second thought until he met his two college roommates at FSU.

“They always encouraged me to play, so we played at Hilaman Golf Course in Tallahassee on a sunny fall afternoon,” said Trinley, now 44. “I knew golf had rules, but I didn’t know what they were. I told them if I did something wrong to tell me.

“After that I played every chance I got. I dived in headfirst when I knew this was something I wanted to do as career. I read everything I could and talked to everybody I could.”

The 45 indicates that Trinley didn’t do much wrong. But it was more than just battling Old Man Par that attracted him to golf.

“I really liked the camaraderie,” said Trinley, who has been the resort’s head professional for nearly six years. “There’s a lot to talk about the game, but it also affords you a chance to talk about other things. Playing basketball, for example, you’re concentrating only on the game. Playing golf lets you talk about golf or politics or something else.”

Golf, however, is still among Trinley’s favorite subjects — golf instruction, in particular.

Trinley, along with Boca Raton Resort & Club Director of Instruction Chris Kaufman, are regarded as two of the top swing teachers in South Florida. In fact, Trinley still make an almost weekly visit to the practice range to have Kauffman watch him hit balls.

“Just to have somebody look at my swing,” Trinley said.

And Trinley does the same for the 450 golf members and guests who play the resort’s two courses.

“I like to teach,” said Trinley, who began his career at the resort in 1993. “Different students learn differently, of course, but I especially like to work with people who are feel players — kind of visual learners. I’m a visual learner, so I think I get the best results out of folks who are visual.”

Such as trying to visualize a score of 45 the first time you ever played nine holes. Ú