For Barbara Cook, Oct. 23 was a big night. That’s when she received Hall of Fame recognition for her service to the Ocean 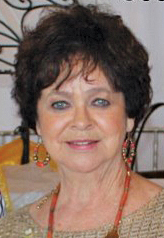 “Barb is someone who always goes above and beyond,” says Kim Hanson, the club president.

But that was only one of three honors garnered by the 40-member club during this past year.

It began in May when the group took second place in the 2011-’13 National Garden Club President’s Project award for plantings in public spaces and special places.

This prestigious award was given for the club’s use of native plants when landscaping the Ocean Ridge Town Hall. The members who worked on the garden project also were instrumental in having the informational kiosk outside the government building made colorful with tile sea turtle mosaics.     “It took a lot of work,” says Cook, who regularly watered and fertilized the plot.

Cook’s dedication to the garden club also was recognized at the District X fall meeting in Port St. Lucie.

Here she received Hall of Fame recognition from the Florida Federation of Garden Clubs for her work at Town Hall as well as her other service to the club.

She’s been club president and chairman of the ways and means committee. And she’s the “go-to” person when something needs to get done.

“To be honored by my club just means the world to me. It’s nice to be appreciated,” she says.

And finally, the Ocean Ridge Garden Club recognized Coastal Star Publisher Jerry Lower as an Earth Steward for heading up a project to return a dune at the south end of town to its natural state.

Working with garden club members from both Ocean Ridge and the Grass River Garden Club, he oversaw the removal of exotics and the planting of native species such as sea oats, sea lavender, and dune sunflower.

“This award is encouragement to garden clubs and everybody else to use native plants and restore natural habitats,” Lower says.