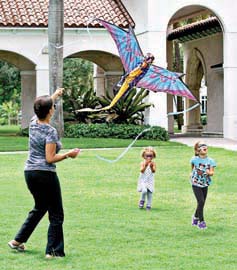 What a kite is or isn’t depends on who’s flying it. It could be meditation or math, work of art or small business empire. Consider:
Kite as techno geek: You can now play kite-flying games on iTunes, Facebook and with a Droid app.
Kite as historian: The kite is a Johnny-come-lately at 3,000 years old, compared to other ancient seaside must-haves like beer (3,000 B.C.) and flip flops (4,000 B.C.).
Kite as literary device: Joyce Carol Oates published a kite-shaped poem in Slate in 2003, but if I had to pick a favorite kite poem I’d pick The Box Kite, by University of Florida professor William Logan.
Kite as slang: To kite a check is to pass a fraudulent one.
Joe Gillie, president and CEO of the Delray Beach Center for the Arts, sees kites as short stories, each one with its own narrative.
The center now has 100 kites on display, including a 25-foot dragon kite built by the center’s maintenance team, Marc Stevens and John Morgan, mentioned specifically because it was such a weird favor to have to ask. (When you’ve finished setting up the chairs for the wedding, can you give me a hand with this 25-foot dragon?)
For his part, Gillie said he painted the dragon and topped it with a papier mâché head.
The center assembled the exhibit in six months. It includes 40 Japanese kites on loan from the Morikami Museum, as well as Indian fighting kites, Hi-Flier Top Flights from the 1950s, and stunt kites on loan from Randy Lowe, known around here as Randy the Kite Man.
Lowe, 62, a retired Boston math teacher, taught his students geometry using kites.
“Flying a kite is all math,” Lowe said. “It’s the same principle as flying an aircraft. There’s a lot to learn; it’s not simple.”
Lowe has about 50 kites, his favorite a 3-D replica of a skin diver. He performs at parties and celebrations, has a regular weekend gig at the Boca Raton Beach Club, and can be seen on weekdays on Delray Beach.
Kite flying “is relatively inexpensive, compared to some other addictions, and it doesn’t have the health risks,” said Mel Hickman, executive director of the American Kitefliers Association in Portland, Ore.
“You’re concentrating on something small, or a small portion of the universe, and you can let everything else just fade away for a while. It forced me to slow down, not rush, and gave my heart a chance to slow down. It sounds metaphysical and maybe it is,” Hickman said.
If we’re to believe legend, the first kite was born when a Chinese farmer tied a string to his hat to keep the wind from taking it.
From there, kites were used in military operations, celebrations, leaflet dropping, festivals and thermometers — all before Ben Franklin pulled electricity from a Philadelphia storm in 1752.
Since then, big moments in kites include carrying orders during the American Civil War (researchers are still working to determine to what extent) and flight tests with the Wright Brothers in 1899, according to the kite-fliers association.
Hickman’s own kite history includes this favorite memory: “Here on the West Coast, you get a chance to fly with the setting sun. That’s something really special.” 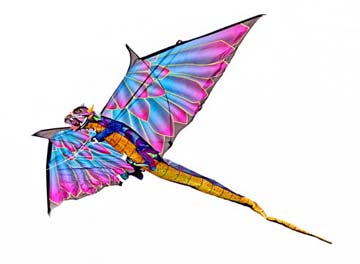