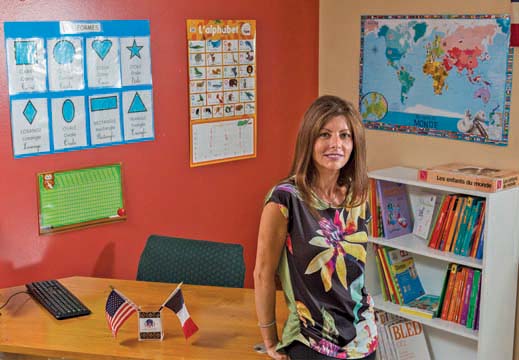 Céline Von May, director and co-founder of the French American International School of Boca Raton, grew up in Paris. Taylor Jones/The Coastal Star

The French American International School of Boca Raton — a private elementary school in Palm Beach County that offers a full-immersion, bilingual program in French and English — will open on Aug. 24.
Céline Von May, the school’s co-founder and director, said there has been a tremendous response from parents seeking an early-start, dual-language education for their children.
“Not only do we have children coming from Palm Beach and Broward counties, we also have children of families that are relocating to the area from as far away as France, Canada and Egypt,” Von May said.
In the United States, there are more than 50 schools that offer this type of bilingual program in French and English; but apart from the French American School of Miami and the Lycée Franco-Américain International School in Cooper City, they have been scarce in South Florida.
“By opening our school in Boca Raton, we thought we could better serve north of us and south of us, and kind of fill in that gap,” Von May said.
Currently, the school offers classes for children in preschool through third grade.
The school’s classes will be small, and the curriculum, which will cover both the academic core standards of Florida and France, will be taught by native-speaking teachers, with half of the day in French, and the other half in English.
Electives such as music, art, computer lab and physical education will alternate weekly between French and English.
“We’re also going to offer a third language once a week starting from kindergarten upward,” Von May said.
In implementing the French national curriculum, known for its academic rigor, the school must follow requirements set forth by the French Ministry of Education, and the children will use textbooks, workbooks and notebooks that come directly from France.
The school is an applicant for the International Baccalaureate Primary Years Programme, according to Von May.
“We plan to add a grade level every year, with the hope of going all the way up to high school so students can earn an international baccalaureate as well as an American diploma,” Von May said.
Von May knows firsthand the value of learning languages. Born to a Swiss father and an American mother, she grew up in Paris speaking only French. When she arrived in the United States with her parents at age 9, she faced a language barrier.
She ended up as one of the pioneer students at a small French-American school in Los Angeles. Now the school – the Lycée International de Los Angeles — has five campuses with over 1,000 students. As an adult, Von May taught at a French lycée in the San Francisco Bay Area.
When Von May arrived in Boca Raton three years ago, she was looking for a French lycée that her daughter could attend, but there was none to be found.
“I thought, this just can’t be,” she said. And that’s when she had the idea to start one of her own.
“What the school is offering is very attractive,” said Cristina Brousset, whose 8-year-old daughter will be attending the school. “Learning other languages and being exposed to other cultures challenges the children and gives them an advantage in their education and development as people.”
The school is at 2500 NW Fifth Ave.  It is housed in a section of a building that it rents from the Connected Life Christian Church, but the school is nonsectarian.
It will roughly follow the Palm Beach School District calendar, but will have longer school days and two extra vacation weeks. Classes begin at 8:30 a.m. and go until 3:30 p.m. Monday through Friday.
Tuition is $10,000 per student plus a $500 fee for materials and polo shirt with logo and a $90 non-refundable application fee.
For details, visit www.french americanschoolbocaraton.org.