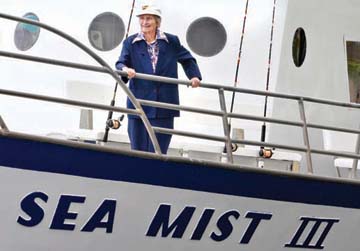 Janet Hall, 96, of Ocean Ridge, is the only living member of the trio that bought the first Sea Mist drift fishing boat.

Four generations of the Garnsey family have worked on the Sea Mist drift fishing boats based in Boynton Beach — including the Sea Mist III, which takes passengers on ocean-fishing trips twice a day from Boynton Harbor Marina.
Capt. Burt Garnsey and his sisters, Wendy Garnsey and Jenny Mastroleo, operate the 50-passenger drift fishing boat, one of four “head boats” that use Boynton Inlet to reach the ocean.
The Garnsey siblings are the grandchildren of Wendall and Janet Hall, who co-founded the recreational fishing company in 1957 when they bought the original Sea Mist II, a single-engine wooden boat, with partner Roland Garnsey.
Janet Hall, 96, of Ocean Ridge is the only living member of the trio that bought the first Sea Mist drift fishing boat.
Hall was ahead of her time as one of the few female boat captains in South Florida — possibly the only one — in the 1950s.
Before becoming co-owner of the Sea Mist operation (and skippering the boat from time to time) Hall operated her own charter fishing boat, Anytime, from docks in Pompano Beach. She also ran a commercial fishing boat.
During a recent interview at Boynton Harbor Marina, Hall said she grew up spending winters with her family in Broward County.
She took a job as a “diver” for a glass-bottom boat. She held her breath and dived down below the boat to collect sea fans and other (now protected) natural treasures for the glass-bottom boat patrons.
Hall said she had no formal license to operate boats back in the 1950s, but learned her trade at the helm.
Even though she was a woman in a traditionally male role, Hall said she “was always treated with a great deal of respect.”
Hall is working with a friend on a book about her life.
“One day, I’ll publish it,” Hall said, while wearing her captain’s cap. 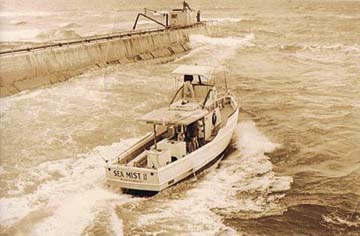 The next generation
Capt. Burt’s sons, Drake and Gage, have worked stints as mates on the Sea Mist III, marking a fourth generation to serve anglers who enjoy fishing the waters off Boynton Inlet.
Drake Garnsey, 19, a student at Palm Beach State College, spent five years working as a mate on the drift boat and now works at Hurricane Alley Raw Bar and Restaurant, owned by Burt’s wife, Kim.
As part of the family’s “You Hook ’em, We Cook ’em” promotion, Sea Mist III patrons can bring fish caught on the drift boat to be cooked at Hurricane Alley, located just west of the marina on East Ocean Avenue.
Old life rafts, crusty fishing rods and vintage Sea Mist placards from the days of $6 fishing trips (rods and bait included) can be found on the walls inside Hurricane Alley. Half-day fishing trips on the Sea Mist III now cost $40 for adults, $35 for seniors and $25 for children.
The Sea Mist III is a 72-foot aluminum fishing boat built in the Lantana Boat Yard and commissioned in 1972.
The fishing family’s first boat, named Sea Mist II, was a wooden vessel with a single engine. The second Sea Mist, also wooden, had twin engines.
After it was sold to make way for the more modern Sea Mist III in the early 1970s, the second Sea Mist was sold and later used to bring Cubans to South Florida during the 1980 Mariel boatlift, said Don Lash, a retired sea captain who skippered the Sea Mist III in the 1970s and worked as a mate on the older, wooden Sea Mist in the 1960s.
Hall’s stepdaughter, Nancy Garnsey of Boynton Beach, is no longer involved in the day-to-day operation of the Sea Mist III, but she stays in touch because her children operate the fishing business.
Nancy Garnsey said she didn’t fish much while growing up because she got seasick. But in recent years she has been taking motion sickness pills and boarding the Sea Mist III to fish the waters off Boynton Inlet a few times a year.
“I went fishing last year, and I had so much fun,” she said. 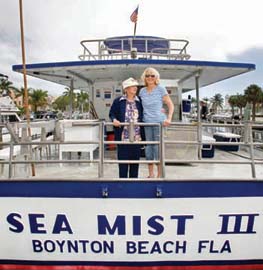