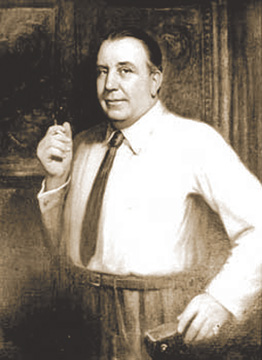 Five things you might not know about Addison Mizner:

1. The Boca connection: Although Mizner is virtually synonymous with Boca Raton, he spent no more than a year in the city and never really lived here. But his small inn — the Cloister Inn, on Lake Boca Raton — and his dreams for turning the area’s farmland into a destination resort city have forever linked him to the area.

2. That Mizner Style: Mizner was known for his Spanish Colonial and Mediterranean Revival styles. He came to appreciate Spanish Colonial architecture while living in Central America. His father, an attorney and politician, campaigned for Benjamin Harrison during his run for the presidency in 1888. After winning, Harrison appointed Mizner’s father as minister to Central America. That’s when Addison was exposed to the style of architecture that would dominate his professional life.

3. A man’s castle: Mizner planned to build himself a home on a man-made island in Lake Boca Raton. His plans included a master bedroom in a tower with a projecting balcony bathroom. The main floor included a great hall, a 36-by-52-foot drawing room and a dining room with a kitchen and butler’s pantry. The lower level had a “boat grotto” for a 45-foot yacht, a wine cellar and servants’ rooms. An elevator connected the floors and a drawbridge helped secure the home.  The house was slated to cost $1 million but was never built.

4.  Mosquito madness: Mizner’s grand plan for Boca Raton was undone by heat, humidity and mosquitoes. Over the summer of 1925, many people from the North came to Florida for vacation. Already real estate salesmen and construction workers were occupying precious rooms. The invading tourists found few restaurants open in the off-season, markets with little that was fresh. Milk and, of course, ice were at a premium. That, along with the climate and summer mosquito invasion, caused tourists returning home to bad-mouth Florida. These factors all contributed to an uncertain real estate climate and the end of the land boom.

5. Think pink: Although we think pink when we think of Mizner, it wasn’t part of his color palette. In fact, the Cloister Inn was beige until its third owner, the Schines, painted it pink after they took over in 1944.  Ú