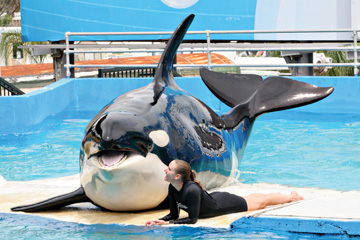 Sarah Onnen knew what she wanted to be since she was little, except she never thought it was possible.
Get paid to swim with animals?
The job was too fun. Too perfect. Too much of a fairy tale ending.
But here she is, all grown up, one of 35 marine mammal trainers at the Miami Seaquarium on Key Biscayne. She dives off dolphins, gets up close and personal with the park’s killer whale — and she smells like fish. A lot.
“I’m 32 and I get to wear a bathing suit to work,” says Onnen, who was on the diving team at Atlantic High School and whose parents still run the family business in Delray Beach — Meisner Electric Inc.
“I really thought it would be just an impossible job that I could never get,” said
Onnen, who still has a photo of herself, in pigtails, standing inside the Seaquarium when she was about 10.
A water baby since the time she could walk — “My parents could never get me out of the pool.” Onnen graduated from Atlantic and went to the University of Miami, where she was on the university dive team. She studied psychology and criminology and graduated with a double major and a minor in biology.


“I was planning on doing some sort of abnormal psychology or forensics. I wanted to work for the FBI.”
Then, something happened.
A fellow diver started working at the Miami Seaquarium, and Onnen was intrigued.
She didn’t need a degree in mammal science. There was no special certification.
She simply needed the things she’d had in her back pocket for a long time: strong swimming skills, scuba certification and a love for animals.
And so it began, this imperfect life of hers behind the scenes.
It’s dirty ands smelly and there is a lot of heavy lifting. Literally.
“It’s actually not for everybody once they realize how difficult it is,” she said. But the thing that she loves, and the thing that keeps her going, is her relationship with the animals. She doesn’t go to work to just jump off the nose of a bottlenose dolphin, although she does that. Her job is caring for animals, getting to know them. And getting them to trust her. 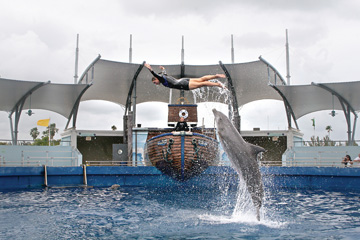 They check them over every morning, cajole them into flipping on their backs so they can check their teeth. (Try that with a 700-pound sea lion.) Sometimes, if an animal’s under the weather, they might have to draw blood. Occasionally, they even move an animal to another facility — which Onnen describes as “a very smelly ride in the back of a Ryder truck.” 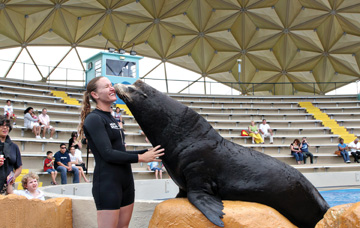 Onnen has no doubts that her animals are cared for, happy and loved. But she’s used to the critics. For years, there’s been a sometimes-noisy effort to “Free Lolita,” the orca whale Onnen often works with. And the occasional activist certainly slips into the park.
“I have such a love for the animals that I choose to do it because the rewards are so amazing,” she said.
But she is cautious. Every. Single. Day.


It’s one thing to have a house cat get spooked and turn on you. But a 7,000 pound whale?
“They’re animals,” she said. “You have to look at all the variables.”
Because things happen.
On Feb. 23, a killer whale at Sea World’s Shamu Stadium killed trainer Dawn Brancheau, who was tank-side when she was pulled in. Onnen didn’t know Brancheau, but she could certainly relate to her job.
In the weeks since the accident, the team at the Seaquarium has gone over the protocol at the park. There were some tears. And Onnen has patiently answered all kinds of inane questions from friends and family.
“I have a couple of relatives who don’t like what I do now,” said Onnen, who said she’s no more afraid now because they are “two completely different animals.”
She realizes what’s possible, and she likens the danger to driving on a South Florida highway. Anything could happen. You have to be careful. You have to use your head.
And in the end, this grown-up job of hers is still a fairy tale — the very one she dreamed up years ago, when she was a little girl in pigtails.