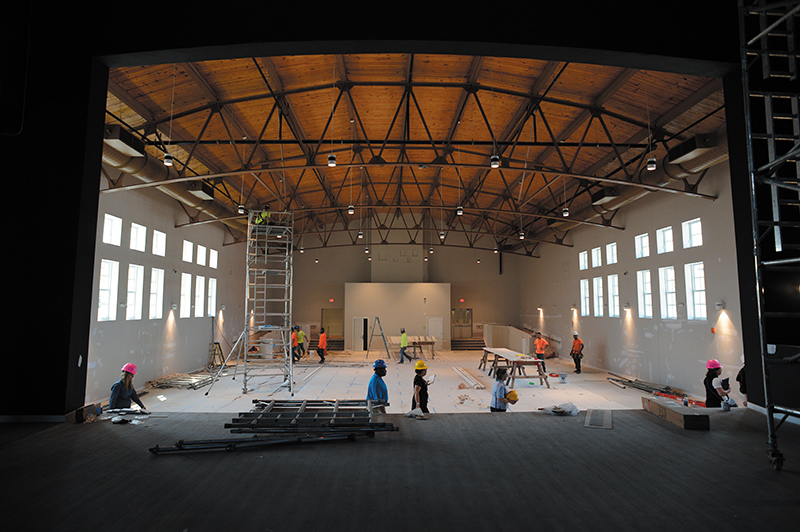 This view from the stage shows the restored roof of the auditorium of the historic 1927 Boynton Beach High School. The ceiling still boasts its original Dade County pine beams. Photos by Jerry Lower/The Coastal Star

Rescued from demolition by a grass-roots effort and transformed into a dynamic cultural arts and activities destination, the historic Boynton Beach High School is nearly ready to shine as the centerpiece of Town Square.

Town Square is a public/private partnership between the city of Boynton Beach and E2L Real Estate Solutions LLC and is scheduled to be up and running this summer, with the old high school to open sometime before then.

According to the city, the 20-acre development will be “a place for connecting — connecting the city’s historic past to its vibrant future; residents to each other; community members and visitors to arts, culture and other activities.”

The 28,009-square-foot high school building at 125 E. Ocean Ave. was neglected and vacant since 1990, and in need of some major TLC. Assistant City Manager Colin Groff, who is in charge of the project and gave a tour of the site in mid-March, said it took at least eight months of mold remediation, and cleaning up mildew, asbestos and lead paint before restoration of the property. 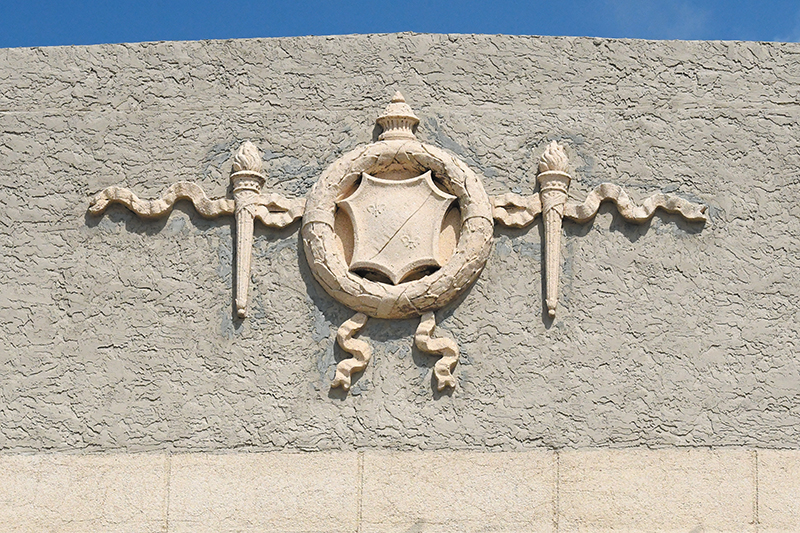 An original crest, depicting a shield, wreath and torches, still adorns the facade of the building.

When finished, the school renovation alone is estimated to come in at $11.3 million, according to Groff.

“We want the community involved in using this building and all the activities we have planned — from art, dance, yoga, karate and fencing classes to rotating public art installations,” Groff said. “We want to bring people downtown to eat, shop, have fun and play.
“We are re-creating downtown Boynton Beach,” he says. “This building will be engaged 24/7. This will be the place to be.”

Renovations were designed to keep the historical aspects of the 1927 structure intact, as the building is listed on the Boynton Beach Register of Historic Places. Efforts have been made to preserve the bell tower; historic window shapes (bringing them up to code and adding hurricane impact); and the school’s crest, original art on the facade (torches depicting enlightenment and learning) and a shield with laurels representing achievement. 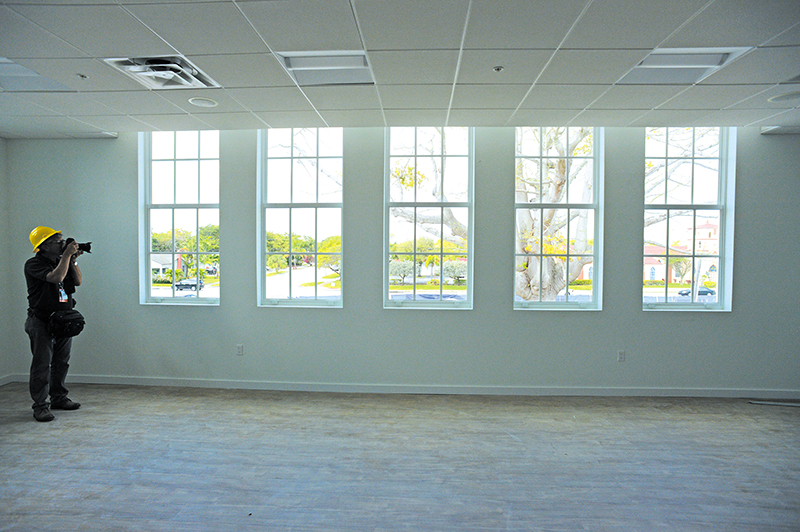 The windows of a planned office offer a view of the preserved kapok tree, a landmark near the corner of Ocean Avenue and Seacrest Boulevard. Photos by Jerry Lower/The Coastal Star

But everything else has been upgraded for modern conveniences — Wi-Fi, air conditioning, elevators and ADA accessibility. Even the bathrooms were redesigned as replicas of the originals with updated hardware and facilities.

Diane Valentini, who will manage the new cultural arts center, says it will have an on-site Fred Astaire Dance Studio, “every art class you can imagine,” and will work with the Lake Worth Playhouse to bring live performances to the venue.

Outdoors, a patio space will be available to rent for events, Groff says, and the grounds will include a family adventure park with themes tied to the city’s history. Examples include a ship, a 25-by-12-foot butterfly representing local endangered butterfly species, a large jellyfish figure, a Flagler train and a statue of the Barefoot Mailman.

The “pride and joy” of the renovation, says Groff, is the old school auditorium/gym, with its eight original Dade County pine beams. As one of the largest auditoriums in South Palm Beach County, it will seat 300 at tables and 500 in other chairs. It will be the future home of the city’s renowned biennial kinetic art events.

Plans call for staff to move into the building as soon as a few months and to initiate programs over the summer.

The new City Hall is scheduled to open July 21, when construction moves to the outer edges of the project, including building a parking garage, completing the landscaping and breaking ground on a hotel.

Eventually the complex will include retail stores, restaurants, residential units and a new fire station and library. 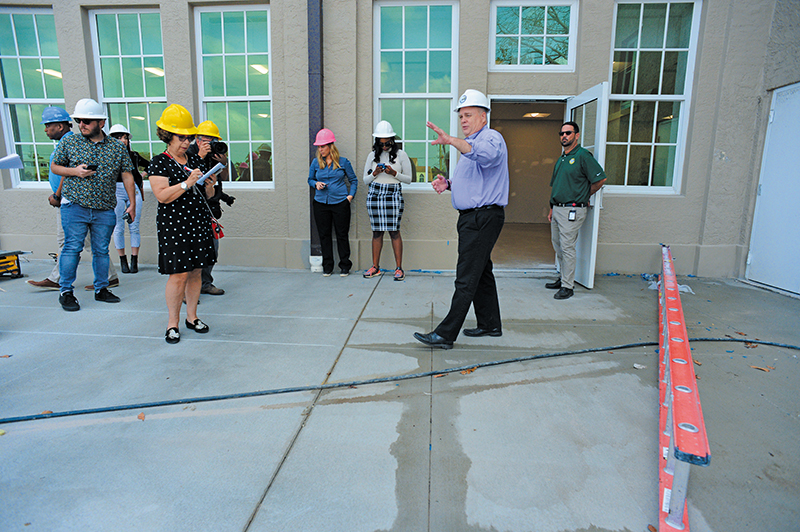 Assistant City Manager Colin Groff discusses plans for the exterior of the 1927 high school building, which will be the centerpiece of Boynton’s Town Square. Photos by Jerry Lower/The Coastal Star

Groff says that the city is looking for donors and that naming rights are available to individuals, organizations, businesses and foundations that would like to support additional technology for the auditorium and other rooms.

Rights start at $1,500 for the “Wish Upon a Starfish,” a 3-D graphic starfish, and go up to $2 million to have your name on the Schoolhouse Children’s Museum building. 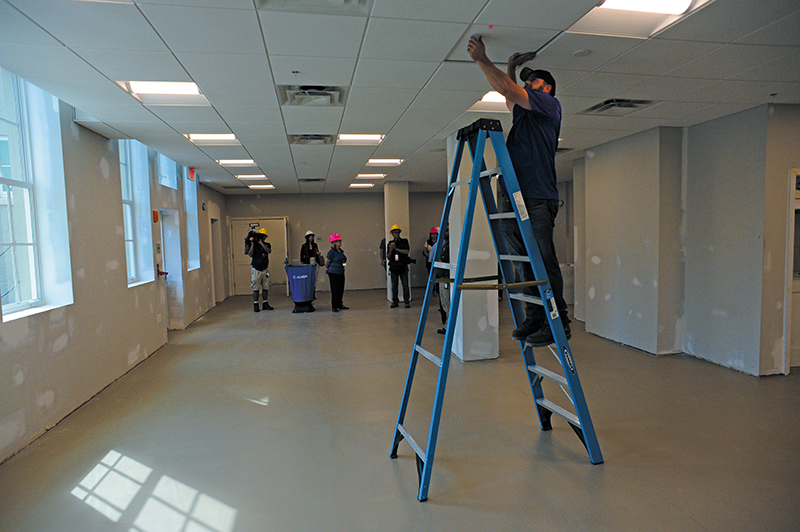 Brian Martin installs ceiling tiles in a second-floor classroom of the old Boynton Beach High School, which has been updated with new electrical, plumbing and air-conditioning systems. Photos by Jerry Lower/The Coastal Star

Reflections and Synesthesia, kinetic art pieces on the plaza, can bear your name for $300,000 and $100,000, respectively.
Your plaque on the Barefoot Mailman’s Adventure Trail will cost $20,000.

Groff emphasized that the building complex will be secure and safe. “Our residents have made the right decision in going forward with these plans and should be very proud of their new building and downtown,” he said.

“Bring your mom, grab a cup of coffee at City Hall, drop the kids off at dance or the library, park once and take advantage of everything there will be to offer in our new downtown,” said city spokeswoman Eleanor Krusell. “This is an inclusive complex with something for everybody.”