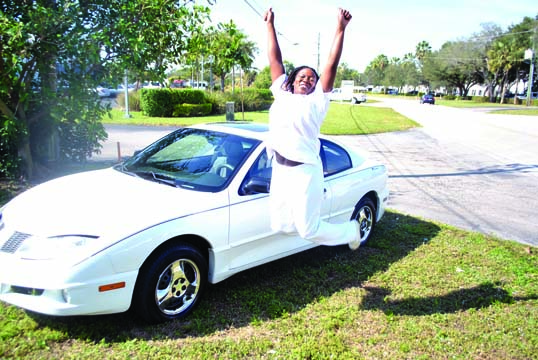 Aquira Leon celebrates having a reliable car. ‘The car that I received was the answer to my prayers,’  she said.

Wheels from the Heart, a charity that finds reliable used cars for single mothers, has won hearts on the outreach committee at First Presbyterian Church of Delray Beach.
The entire Christmas offering, which last year raised $30,000 for several charities, will go to buy cars for at least four deserving families chosen by Family Promise, Adopt-a-Family and other local charities. The Christmas offering last month is still being counted.
“We like to help local families in need,” committee co-chair Jeane Heavilin said. “Over the years, we have seen that the common need is transportation. We are so dependent on cars.”
The congregation trusts used-car dealer Steve Muschlitz, the founder of Wheels from the Heart, to locate and overhaul the best cars.
“We are very impressed by Steve,” Heavilin said. “This is a ministry for him. He focuses on single mothers who are getting ripped off.”
Muschlitz, who owns Country Club Auto in Boca Raton, sees himself as an advocate for single mothers in his charity work. “I’m 51 years old, and this is the first time that I can look at myself in the mirror,” he said.
First Presbyterian gave him a portion of last year’s Christmas offering to find cars for three single mothers.
One of them was Aquira Leon, whose previous two used cars each had broken down within a month. “The car that I received was the answer to my prayers,” she said.
Leon, a Boynton Beach resident with a 3-year-old son, was able to finish her courses for a nursing degree once she got reliable wheels.
“Giving the car is freedom and a life change,” Muschlitz said.

Daniel Silva, the best-selling author of Israeli spy novels, highlights the Jan. 8 gala for hundreds of the Jewish Federation of South Palm Beach County’s largest donors.
The Sandler Family Major Gifts Event at St. Andrew’s Country Club features Silva in “dynamic conversation” with his wife, NBC journalist Jamie Gangel.
A minimum $10,000 donation is requested to attend. The event honors the donors who have contributed $1 million or more to the Jewish Federation’s annual campaigns.
“The federation has been feeding the hungry, caring for our elderly and disabled, educating the next generation, and providing comfort and brighter lives in Israel and around the world,” event co- chair Cliff Seresky said.
“We couldn’t possibly do it without the overwhelming compassion and leadership of our major donors.”

The new Jewish Federation men’s division leaves Jan. 29 on a “men’s only” mission to Cuba.
“The men will be learning about Jewish life hands-on as well as spending great times together in the Tropicana, in Old Havana and learning about Cuban rum and cigars,” the federation said in a news release.
Mission chairman David Pratt clarified that the three-day “private journey” has enough time to both “get in touch with the needs of our Jewish family there” and explore the Cuban sights, sounds and tastes” in what he calls a “life-changing experience.” The trip cost includes a minimum $1,800 donation to the federation.
“This is a unique opportunity to spend Shabbat with fellow Jews who are just a couple hundred miles away but worlds apart,” said Ken Lebersfeld, who signed up for the trip. “One can only visit with an organized group like this.”

The Knights of Columbus men at Emmanuel Catholic Church are geared up for a food drive to surpass the 4,000 pounds of food collected for the CROS Ministries food pantry in Delray Beach last September.
Donations will be accepted at the church at 15700 S. Military Trail from 3:30 to 6 p.m. Jan. 17, and 7:30 a.m. to noon Jan. 18.

The annual Pray for Delray prayer breakfast on Jan. 9 has grown this year to include a police captain and firefighter praying for law enforcement and first responders.
The 7 a.m. breakfast at Pompey Park features Atlantic Community High School principal Anthony Lockhart as keynote speaker. Chamber of Commerce president Karen Granger will be the emcee.
Speakers representing all areas of the Delray Beach community including police Capt. Michael Coleman and fire-rescue officer Kevin Saxton will offer prayers.
The event is hosted by the Avenue Church with proceeds to City House, a charity for single mothers with children. The Rev. Daniel Williams, the lead pastor at Redemption Church, will provide music.
Tickets are $25 at www.theavenuechurchdelray.com, click on “Pray for Delray.”

St. Paul’s Episcopal Church expects to name a new rector this month after a lengthy search that has narrowed the field to two candidates.
The search began after former rector Chip Stokes left last year.
The call for candidates yielded 22 priests. The search committee held Skype interviews with four finalists in November.
The top two candidates will travel to Delray Beach this month for final interviews with the search committee and vestry before the final selection.