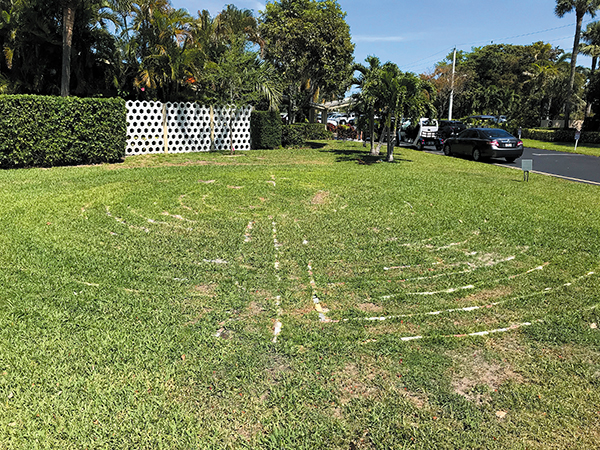 Connor Lee took charge of all aspects of the labyrinth: design, site preparation and finding people to help. Photo provided

Connor Lee had always wanted to do something for his church, Unity of Delray Beach.
“I’ve been attending Unity for seven years, and before that we attended Unity in Palm Beach,” the Atlantic High School senior said. At the same time, Connor was looking for a project to complete his Eagle Scout certification.

“I was talking to the Rev. Durgan and she said she’s always wanted a labyrinth,” Connor said, referring to Laurie Durgan, the church’s youth education director. And there it was! Connor could build a labyrinth at the church to earn his Eagle Scout rank.
Connor had walked a portable labyrinth that the Rev. Ytonna Finnegan, assistant youth education director, used at Unity teen retreats. “I really didn’t know much about them,” Connor said, “but the Rev. Hurley did.”
Linda Hurley, director of the prayer ministry, has been studying labyrinths for more than 20 years and was thrilled to share her training as a Veriditas labyrinth facilitator and her experience from studying labyrinths in France and Germany. “I was fascinated by the design, the sacred geometry involved and the deep meaning behind the labyrinth,” Hurley said.
A labyrinth is a singular path, usually curved or circular, leading to a center. Almost every culture has a labyrinth, Hurley said. Some date back more than 4,000 years.
Walking the labyrinth isn’t like a maze, where you’re solving a puzzle to escape. There’s only one way in, and the entrance is also the exit. There are no dead ends and there’s no way to get lost. Instead, the goal is to lose yourself in a meditative walk. Labyrinths are tools for personal, psychological and spiritual transformation. Experts say labyrinths may enhance right-brain activity and mindfulness.
Walking a labyrinth is a way to quiet the mind, recover balance and encourage insight and self-reflection. Labyrinths are nondenominational and cross-cultural.
People who have walked labyrinths say they bring peace to the mind, body and spirit.
Connor sees it more simply: “You’re connecting to yourself and to whatever God you believe in. It’s about making the connection.”
With Hurley’s guidance, Connor took charge of all aspects of the labyrinth: design, site preparation, choosing the correct materials and lining up people to do the work.
Connor decided on a garden path labyrinth, a grass pathway outlined with brick pavers. He said some people like to walk barefoot, maybe to feel more connected to the planet. It was also more cost-effective to use more grass and less brick.
He used a design borrowed from the famous labyrinth at Chartres Cathedral in France.
Once the site was chosen, Connor’s crew — other Boy Scouts — cleared it. “We had to hire a tree removal service,” Connor said. The people at Tip Top Tree Service in Delray Beach surprised Connor by donating their services, and once the tree was out, the Scouts dug up the rest of the vegetation and leveled out the dirt before laying 60-70 pieces of sod to fill in blank spots.
“While we waited for the sod to take hold, we outlined the labyrinth with spray paint,” Connor said.
The Scouts dug out the outline with trenching shovels and added sand for drainage before they laid more than 1,000 pavers donated by Deck & Drive of Boynton Beach.
It took about two dozen young men almost 80 hours to do the work, most of which was accomplished between 9 a.m. and noon on Saturdays to fit the teens’ busy schedules. “Some came only once, but others came every week,” Connor said. It gave him a chance to practice the leadership skills central to a Boy Scout’s preparation.
“It helped me take other leadership roles as well,” Connor said. As the student government president at Atlantic, he takes responsibility for 2,300 youths.
One of the most important lessons he has learned is not to be afraid to lead. “Stay true to yourself,” Connor said. “Lead your own way, using your own methods. Use your uniqueness.”
The labyrinth is in front of Unity, easily accessible to all.
“It’s solitary, even when you’re walking with others,” Hurley said. “You’re all on one path, but you’re on your own journey.”
Durgan has known the Lee family, including Connor’s parents, DJ and Lynn, for more than 20 years. “Connor’s light has been a blessing. Wherever he goes, he just makes everything better,” she said.

World Labyrinth Day
To celebrate the 10th annual World Labyrinth Day and to formally welcome the public to Connor Lee’s labyrinth, a special “Walk as One at 1” will begin at 1 p.m. May 5 at Unity of Delray Beach, 101 NW 22nd St. It is part of a worldwide group walk.
The public is invited to gather at 12:30 p.m. for a brief introduction and a circle of prayer. For more information, call 276-5796 or visit www.unityofdelraybeach.org.