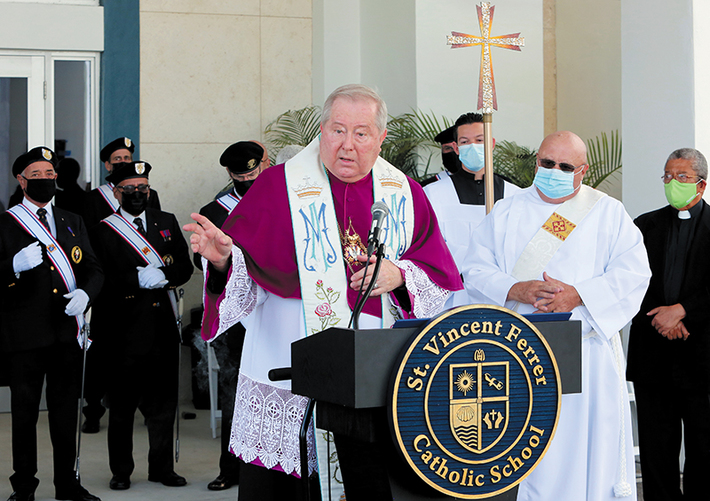 Monsignor Thomas J. Skindeleski marked the 50th anniversary of his ordination to the priesthood in May. He plans to retire as a pastor effective Aug. 31. ABOVE: Skindeleski, 75, leads the blessing of a new addition to St. Vincent Ferrer Catholic School in January. Tim Stepien / The Coastal Star

On a sunny weekend in May, the Very Rev. Canon Thomas J. Skindeleski of St. Vincent Ferrer Catholic Church in Delray Beach marked the golden anniversary of his ordination as a priest with two celebrations with family and friends from all over the country.

Although he’s been a priest for 50 years, Monsignor Tom, as he’s known among his parishioners, started practicing for the priesthood around age 10 — using Necco wafers candy and tepid tea to give communion to his younger siblings.

“God was speaking to me already,” he said. “I was already in love with the Lord by then.”

When other kids went to lunch, Skindeleski often went to pray. When it came time to make plans for the college, he faced a crossroads. He had a deep passion for architecture, but he said God told him, “There will be time for that. I want you to be a priest.”

It was a choice his parents embraced. His father had considered entering the priesthood as well and liked to joke, “It’s better to raise a priest than be a priest.”

In 1971, at the age of 25, Thomas Skindeleski was ordained at the Cathedral Basilica of Saints Peter and Paul in Philadelphia, by Cardinal John Krol, who died in 1996.

Skindeleski made other sacrifices besides forgoing a life in architecture. A pretty girl he dated got a “Dear Jane, I’m entering the priesthood” letter that Skindeleski still remembers writing. “She wrote me a couple times after, but I never responded. I said goodbye to an old way of living, and my focus was turned to God.”

The many joys in his life have mitigated any sacrifices, Skindeleski says.

“I’ve traveled and seen so much. The great cathedrals in France. I’ve been to Rome dozens of times,” he says.

He treasures his annual spiritual retreat, a week with Trappist monks in the mountains of Massachusetts, where unnecessary talk is discouraged and quiet communion with nature rejuvenates his spirit for another year.

Skindeleski says in his own discouragement, he has found ways to help others face theirs. He tells them that at those times he hears God’s voice saying, “I still love you.” God will always love you, but that doesn’t give you license to live your life without restraint.

“There’s nothing wrong with wealth or power,” he says. “It’s how you use whatever you have that matters. My goal in life has never been wealth or power. It’s been to get to heaven. People today focus on themselves. They say, ‘It’s all about me.’ I say, ‘Say no to me and yes to God.’ Live your lives in readiness to meet God.”

And he can say that to people in six languages (plus English and Latin), having been inspired by his friend and mentor Pope John Paul II. “It enables me to reach out to people in their own language. That’s so important.”

Skindeleski came to St. Vincent Ferrer in 2005 during an embezzlement scandal that shook parishioners’ faith and prompted many to leave the church. St. Vincent has flourished under his kind heart and steady hand.

At the same time, God fulfilled his promise to Skindeleski about his architectural dreams.

Before he came to St. Vincent, Skindeleski served as pastor at Our Lady Queen of the Apostles in Royal Palm Beach, where he oversaw the building of a rectory, parish administration building and a meeting facility. During his tenure at St. Vincent, the school has doubled in size and become a technological powerhouse, among his other achievements.

Skindeleski attributes his success at renewing the parish’s faith and rebuilding the church, literally and figuratively, to his lifelong devotion to prayer.

“All during the day, be prayerful,” he says.

Whether he’s walking, driving, or brushing his teeth, Monsignor Tom is praying. His motto is “ora et labora” — pray and work.

Skindeleski will retire as a pastor on Aug. 31, but “I’ll be very active in different ways,” he says.

In his pastoral message on May 16, Skindeleski wrote: “My true ambition is to be a saint — not necessarily an officially canonized one as those three that I met were — but simply a saint in the sense of spending eternal life with Our Lord in heaven. That has been my real goal in life.”

Of his time at St. Vincent, he says, “There’s never been a dull moment. I’ve never once been bored.”

In Boca Raton, B’nai Torah Congregation is putting more focus on mental health support. One facet of the coronavirus with which clergy members are concerned is that people who lost someone were never able to properly grieve the loss. David Steinhart, senior rabbi of B’nai Torah Congregation, is making mental health a priority for his congregation, encouraging people to start and participate in support groups.

Steinhart says not only is it OK to ask for help, it’s OK to look for help beyond spiritual counsel. Churches and synagogues are turning to professionals for extra help, hiring social workers and other mental health practitioners to expand their arsenals.

But the first step is to ask for help. And the best place to start is your place of worship.