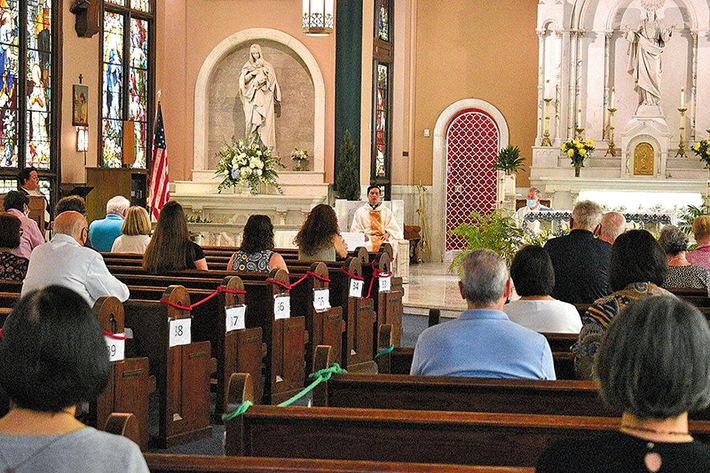 The Rev. Dennis Gonzales celebrates a Mass for health care professionals in November at St. Ann Catholic Church in West Palm Beach. Gonzales, who has a bachelor’s degree in nursing, took over as pastor of St. Vincent Ferrer Catholic Church in Delray Beach in September. Photo provided

Raised in a Catholic family in the Philippines, Gonzales, 48, dreamed of the priesthood, but he knew a nursing degree could provide him and his family with financial security. So instead of entering the seminary, he earned a bachelor’s in nursing from Notre Dame University in Cotabato City.
After graduation, a hospital in Washington, D.C., sponsored him, and his childhood dream of coming to the United States came true. Sending money home to help educate his younger siblings and support his parents fulfilled another important goal.
Still, the priesthood was never far from his thoughts.
Health care and spiritual care have always coexisted in Gonzales’ mind, especially as he cared for dying patients. He completed an internship program in clinical pastoral education at the National Institutes of Health in Bethesda, Maryland, ministering to terminally ill patients who were participating in clinical trials.
While in Washington, Gonzales earned a scholarship to pursue his master’s degree in theology at the Washington Theological Union. When he completed the program, he was ready to fully commit to the priesthood and began looking for a seminary.
After visiting a friend in South Florida, Gonzales was ready to abandon snow for sand. He earned a master of divinity at St. Vincent de Paul Seminary in Boynton Beach and was ordained in 2013 by Barbarito at the Cathedral of Saint Ignatius Loyola in Palm Beach Gardens.
Since his ordination, Gonzales has served at St. Helen in Vero Beach and St. Ann in West Palm Beach. He has also served as a hospital chaplain, lending support to hospice clients and their families, as well as the health care staff.
As the coronavirus pandemic raged in the fall of 2020, Gonzales celebrated the fourth annual White Mass at St. Ann on Nov. 14, where health care professionals renewed their physician and professional health care promises to God and to adhere to the Catholic faith in the practice of medicine.
He said then, “Love God — the greatest commandment — and then love your neighbor as you love yourself. Loving yourself is part of the equation. My friends, taking care of ourselves does not mean that we neglect the needs of others until our own needs are satisfied. It means we have to be aware of nurturing sound and healthy attributes to ourselves.
“There is a saying that goes, ‘You cannot give what you do not have.’ So, if we don’t have strength, our energy quickly dries up.”
Gonzales believes that the callings to nursing and the ministry overlap. “In his ministry, Jesus was always caring for and healing the sick, touching the outcast and untouchable. He healed them not only physically, but also emotionally, spiritually and socially,” Gonzales said in an interview with Global Pinoy Nursing in 2018.
Gonzales is humbled that Barbarito chose him to lead St. Vincent, and says, “I’m so thankful to Monsignor Tom that I inherited a parish on sound footing, with a strong staff and a great school.”
Gonzales’ goal at the church and in the community “is to have a healing conversation, to stop the division in our society, and to look for the positive. We need to talk about our differences and not let issues further divide us.”
The former registered nurse calls the fighting over vaccinations and masks “sad,” but he believes confronting people isn’t the answer either. As a man of medicine, he is ready to talk. “I never imagined vaccinations would be a thorny issue. But I see myself as a community builder, a unifier. I would tell people to reflect on what is good for their family and for the community.”
After that, it’s up to them.