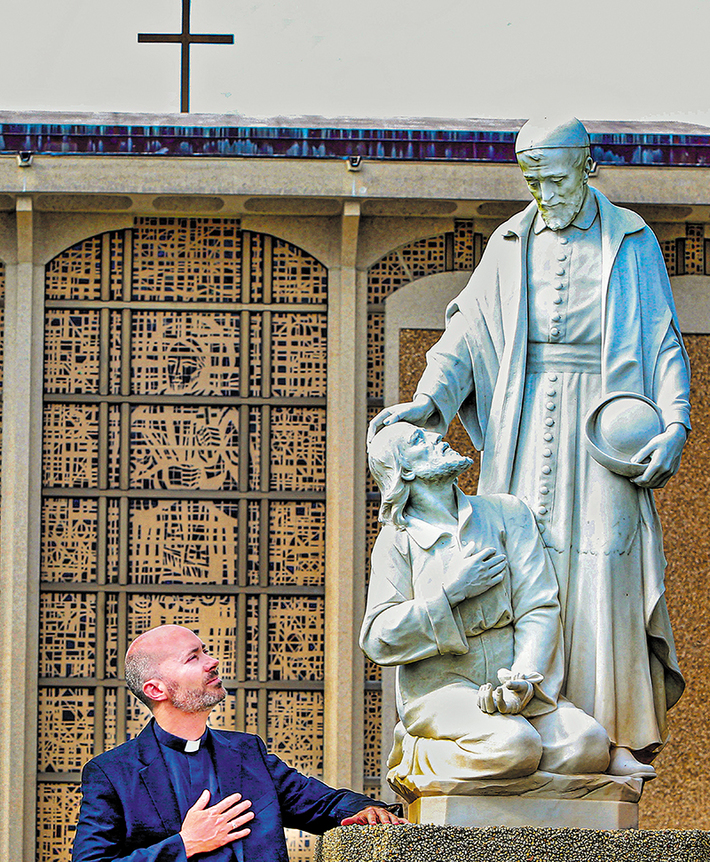 Father Kevin McQuone, formerly a parish priest in the Panhandle, has returned to his alma mater at St. Vincent de Paul Regional Seminary in Boynton Beach. Here he looks at a statue of St. Vincent on campus. Tim Stepien/The Coastal Star

How do we give purpose to our lives?
For Father Kevin McQuone, the answer is serving God and the church.
This year, the 40-year-old priest will serve the church in a new way. Formerly a parish priest in Florida’s Panhandle, McQuone has returned to his alma mater, St. Vincent de Paul Regional Seminary in Boynton Beach, to educate and prepare seminarians to take on the demands of a parish in these volatile, changing times.
Located on 43 acres along Military Trail just north of Woolbright Road, St. Vincent de Paul’s is owned by the seven Florida dioceses. The seminary was established in 1963, became an archdiocesan seminary in 1971 and has been a regional seminary since 1981.
Named for St. Vincent de Paul, a pioneer in seminary education, it has graduated more than 650 priests and is the only fully bilingual theological seminary in the United States. For the 2022-2023 academic year, more than 120 seminarians are preparing to serve a parish.
The parish priest is where the rubber meets the road in the church. These men deal directly with the messiness of life and death among their congregants.
For McQuone, those challenges came in the form of Hurricane Michael, which devastated Florida’s Panhandle in 2018, and a worldwide pandemic in 2020. His work was even more difficult as the sole priest in a parish that usually had a second priest to help shoulder the load.
Only about 5% of the Panhandle’s population is Catholic, but much of the support after Michael came from Catholic Charities, which brought supplies and volunteer medical professionals. Most of the people McQuone helped were strangers to him, but not to his heart.
“We should see others as another self,” McQuone said.
True charity happens without judgment or criticism. The golden rule shouldn’t be exercised only when it’s convenient or you’re in the mood, and you shouldn’t love your neighbor only if he looks and believes exactly as you do, he said.

‘The moment I realized that God existed, I knew that I could not do otherwise than to live for him alone.’

In these socially charged times, it’s hard to know when and where the rules should be strictly applied and when they should be changed. The church often seems weighted down, even hobbled by its own rules.
Today’s climate runs contrary to some of what the church teaches. Consider its views on birth control, homosexuality and women priests.
“As priests, we wrestle with the gray areas and the messiness of life,” McQuone said. “Balancing truth and mercy should be our goal.”
When dealing with important personal relationships (the devout mother who loves her gay son or the father whose beloved teenage daughter gets pregnant), compassion is the best tool, he said. McQuone wants to mend and not sever, bind and not break, and answer yes as often as he can.
“I believe in meeting the person where they are,” he said.
No one is a perfect Catholic; a priest’s opus is to find common ground and light the way. Consider the intent and the circumstances, he said.
McQuone said he didn’t hear the call to the priesthood until he was in college. Born in Ohio but raised in Tallahassee, he got his undergrad degree in Spanish literature and international relations from Florida State in 2004.
While he was there, he became active in the on-campus ministry. The more active he became, the more he wondered about a life devoted to serving God. Finally, he asked himself: “What does it look like if Jesus is the center of my life?”
His parents and four sisters were surprised. Although the family faithfully attended Mass, the priesthood wasn’t a goal his parents ever suggested. He had always seen himself as a husband and father, a role he anticipated with joy and love.
His decision to forgo fatherhood hurt his sisters, who had always imagined family gatherings with his kids playing with their children. And he had doubts about living a life of celibacy and never being called Dad.
But the seminary’s goal is to graduate quality and not quantity in priests. It doesn’t mind doubts. Priests-in-training go through weekly therapy to be sure they’re suited for the job. Even though a seminarian’s tuition and room and board (nearly $50,000) are paid for by the diocese, it would rather lose the investment than graduate a priest whose heart isn’t pure.
McQuone estimates two or three out of 10 don’t finish.
St. Vincent de Paul graduated 187 priests in the past decade. That’s not enough to sustain the church. But it’s hard to attract candidates when the sacrifices are tremendous and the pool is small to begin with.
In addition to his classroom teaching, McQuone serves as St Vincent de Paul’s spiritual director.
He meets one-on-one with seminarians to discuss their prayer lives, given that a significant part of a priest’s time is spent in prayer and reflection, listening for God’s voice, McQuone said.
They discuss the seminarians’ joys and desires, fears and doubts, mental health and motivation.
Often these questions of faith are answered with more questions designed to access the very core of the person.
“We use all the tools we have to help sort out his experiences,” McQuone said.
These pastoral tools — skills like active listening, gentle corrections, mirroring and rephrasing, and asking delicately probing questions — are also the methods the seminarians will learn to help their own congregants some day.
“These are the practical skills of the ministry. They help us see around the blind spots,” McQuone said.
“Faith is like a muscle you have to exercise,” McQuone said. Like anything else we give our time and attention to, it grows, and moments spent in prayer, gratitude or reflection grow our faith.
McQuone has part of a verse he recalls when he is stressed, or afraid, or alone. “It helps me stay rooted on the path,” he said. It’s just five words from the Gospel of Matthew, 28:20: “I am with you always.”