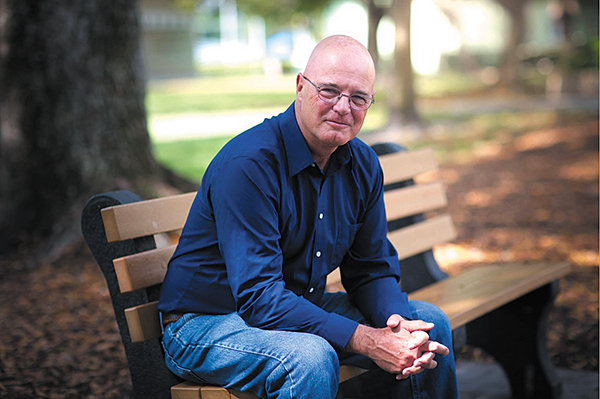 Author and contemporary Christian scholar Brian McLaren spends between 90 and 100 nights on the road each year traveling to public speaking engagements. This month he plans to be in Boynton Beach. Photo provided

They are age-old questions: Who treats the doctor? Who cuts the barber’s hair?
And who pastors the pastor?
People like Brian McLaren do.
McLaren is the best-selling author of 15 books on faith and Christianity, and these days, the contemporary Christian scholar is an in-demand public speaker who spends between 90 and 100 nights on the road every year.
One of those nights will be spent in Palm Beach County when a speaking engagement brings McLaren to St. Joseph’s Episcopal Church in Boynton Beach on March 14.
McLaren is calling from the road after speaking in Atlanta and Nashville. He’s heading to his home base in Marco Island.
“Christianity is changing,” McLaren says.
Not that it was ever static.
There are more than 300 religions and at least three dozen Christian denominations in the United States, including people who believe in one God and people who believe in many. Some even believe in something the rest of us wouldn’t call God at all. Statistically, according to a 2016 Gallup poll, 89 percent of adults say they believe in God.
But most of those believers never make it to church. Theologians like McLaren are trying to smooth out the road so more people will want to take a walk there.
But he also cautions us: “It’s not about the church meeting your needs; it’s about joining the mission of God’s people to meet the world’s needs.”
McLaren believes in “aliveness.” Some people, he says, aren’t really living. “Aliveness is saying, ‘I have come to live life to the fullest, a life abundant, with freedom from fear, fatigue and anger,’” McLaren says.
Religion is about connecting people with God, says Wendy Tobias, a priest at St. Joe’s. She says religion means to “re-ligament yourself” to the Lord.
Scholars such as Tom Harpur and Joseph Campbell support her conclusion. They say religion is rooted in the Latin word ligare, which means to bind or connect, plus “re,” meaning again. People do want to connect, but religion has become so complicated, with so many opinions, people aren’t sure what to believe.
For people who think Christianity’s brand is tarnished and old — an outdated, antiquated mythology — McLaren says to look deeper. Is love outdated? Is forgiveness a myth?
Tobias has been teaching a course for Lent following a lesson plan developed by McLaren to go with his most recent book, The Great Spiritual Migration: How the World’s Largest Religion Is Seeking a Better Way to Be Christian. The four-week course, called A Way of Life, has been the subject of small group meetings at the church and is designed to help people find God in their everyday lives.
Lots of people are searching for answers, but most don’t even know what they really want from life, McLaren says. They catch their desires like the flu from the people they spend time with. Instead of religion and the church becoming the source of their moral codes or life goals, people are looking to their neighbors and peers.
“Religion should help people have healthy desires, help people think about and choose desires that are good,” McLaren says. It’s not about a newer car, or a bigger house. Those things may impress humans, but they don’t impress God.
McLaren says whatever we choose to focus on in life will grow the more attention we give it. If you focus on the negative — what your kid is doing wrong or how incompetent your boss is — those things will grow, eating up larger and larger parts of your time and your assets.
“The job of the church is to teach love,” McLaren says, specifically “the skills to differ gracefully. We must teach the skills of civility, and say no to negativity.” If solutions begin with defining the problem, we have to be able to communicate to do that.
McLaren says, “It comes down to this: Ask yourself, ‘What kind of world do I want to live in?’ In the New Testament, Paul said, ‘Be not deceived; God is not mocked: for whatever a man sows, that shall he also reap.’ ”
What are we sowing?

If You Go
Brian McLaren will speak to the congregation about his book The Great Spiritual Migration at 6 p.m. March 14 at St. Joseph’s Episcopal Church, 3300 S. Seacrest Blvd., Boynton Beach. Call 732-3060.