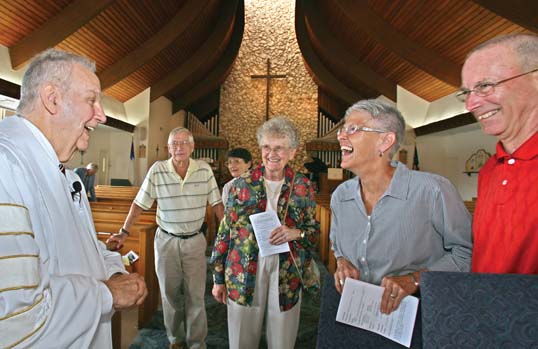 The Rev. Charles Mory shares a lighthearted moment with parishioners
at the Church of the Palms in Delray Beach. Tim Stepien/The Coastal Star

The Church of the Palms may have had the most beautiful gardens and stained glass windows when it opened on North Swinton Avenue a half-century ago.

But the congregation was dying when the Rev. Charles Mory, 74, innocently appeared for Sunday services last May ready to join a congregation that he knew nothing about.

Church membership had plummeted from 412 to 70 under the previous pastor, who announced that same Sunday that he would be leaving the church.

Those who remain know they can’t attract a new pastor quite yet because of their history of strife. So Mory put his retirement on hold to become their interim pastor.

The congregation is crediting this loving old pastor for signs that Church of the Palms might be growing again. About 20 new members have joined in the past two months.

“He has built up a fire in everybody,” church moderator Margo Beck said. “He gets us smiling. We’re having a good time. I wish he was going to be here forever.”

Mory has delayed his retirement before. Three other United Church of Christ congregations called him to be their troubleshooter as interim pastor in the last 10 years.

“He understands the huge job that an interim pastor has when a church has fallen from the heights to the depths,” said the Rev. Linda Harper,  associate pastor.

Mory thinks two to three years of hard work will be necessary before Church of the Palms recovers. “We can’t form a search committee for a new pastor until we can say we have the leadership to get this congregation back on its feet,” he said.

“Pastor Charles has brought the miracle of new life to this congregation with joy and hope and his wonderfully positive attitude,” Harper said.

“He’s bound and determined to get things working,” church member Lois Clement said. “I know he’s just the interim. But he can stay as long as he wants.”

The musical talent of eight congregations join in concert Feb. 17 to benefit the interfaith nonprofit that provides emergency food and shelter for homeless families with children.

The Sounds of Promise Concert will feature music ranging from spirituals to Hebrew songs, praise bands and traditional choirs.

Family Promise of South Palm Beach County is supported by volunteers in 24 congregations who take turns providing shelter for homeless families in their churches and synagogues. 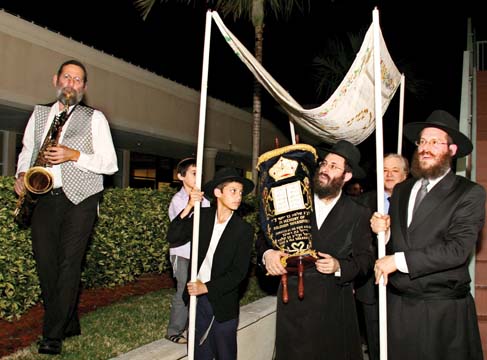 A coastal Jewish congregation is celebrating the restoration of a 19th-century Torah scroll with a fascinating history.

The Chabad of South Palm Beach inaugurated the scroll Jan. 21 at Plaza Del Mar in Manalapan.

The Torah went underground when Communists took power in Russia. After World War II, it was rescued and taken to Brooklyn by a Holocaust survivor who kept it in his home with 60 other rescued scrolls because he couldn’t afford restoration. His heirs sold the scrolls for restoration after his death.

Members of the Chabad of South Palm Beach became intrigued by this particular scroll when they were searching for a Torah to restore for use in their synagogue.

“Our families experienced the difficulties of life under the czars, the chokehold of the Communist regime on Jewish practice, the horror of Hitler and ultimately resettlement in the United States after the war,” Rabbi Leibel Stolik said. “This scroll continues the legacy of the Jewish nation in a way that is very close to home for us.”

It was 25 years ago that Alzheimer’s Community Care found a loving home at Advent Lutheran Church in Boca Raton.

Advent’s weekday bustle of activity includes 480 children enrolled in its K-8 school and day care. The campus also has an assisted living facility for seniors.

“We serve from infancy to eternity,” the Rev. Andrew Hagen said proudly.

But Advent offered no weekday gathering place for seniors who live off campus. Now Advent has launched a $400,000 fund-raising campaign called Space for Grace to address that need.

The plan is for ACC day care to move out of the fellowship hall into a single-family home that the congregation purchased near its campus.

“We’ve loved having Alzheimer’s Community Care there, but the church was not able to develop a daytime church ministry,” Hagen said.

The fellowship hall then will be renovated with the addition of a new daytime café. Seniors can enjoy hobbies such as quilting, study the Bible and learn to operate a computer as they socialize.

“If you feel lonely, just come on over,” Hagen said.

The fund-raising drive includes money to buy bleachers in the school gym.

Gay couples can now sanctify their unions with a special blessing at area Episcopal churches.

“We are responding to God’s call to extend God’s love to all children,” said the Rev. Andrew Sherman of St. Gregory Episcopal Church in Boca Raton. “We are proud that our church has opened itself up to acknowledge, bless and honor gay people.”

The ceremony, called “The Witnessing and Blessing of a Lifelong Covenant,” began in December after it was approved by the national Episcopal Church last summer.

Gay rights issues have torn all Protestant denominations in recent years. The Episcopalians approved their first gay bishop in 2003, causing some conservative parishes to break away from the national church.

“Our church has taken a lot of criticism from the larger Christian community,” Sherman said. “The changing attitudes have been painful and difficult for some.”

Global warming is an impending peril for the faith-based community to examine.

It’s no surprise that the Unitarian Universalist Fellowship of Boca Raton is sponsoring a March 2 community workshop on climate change.

Unitarians draw upon both science and world religions to set their direction. One of their seven guiding principles is respect for interdependent existence. “So this is a logical blend,” organizer Jan Booher said.

But the Unitarians are not alone in their concern. Consider what the leaders other religious faiths are saying:

“Climate change is not about economic theory or political platforms … it’s about the future of God’s creation and the one human family,” the U.S. Catholic Bishops wrote.

“For Jews, the environmental crisis is a religious challenge,” the Consultation on the Environment and Jewish Life concluded. “As heirs to a tradition of stewardship, we cannot accept the escalating destruction of our environment.”

“Christians must take action now to stand in solidarity with our brothers and sisters around the world whose lands, livelihoods and lives are threatened by the global climate crisis,” the United Methodist Church’s board on church and society agreed.

The public is invited to participate in the workshop, which brings the faith community, scientists, government leaders and activists to support a regional climate action plan.

The fellowship is located at 2601 St. Andrew’s Blvd. Call 482-2001 or register at  www.SFLClimateActionPartners.org.

Tags: chabad of south palm beach, church of the palms, delray beach
E-mail me when people leave their comments –
Follow