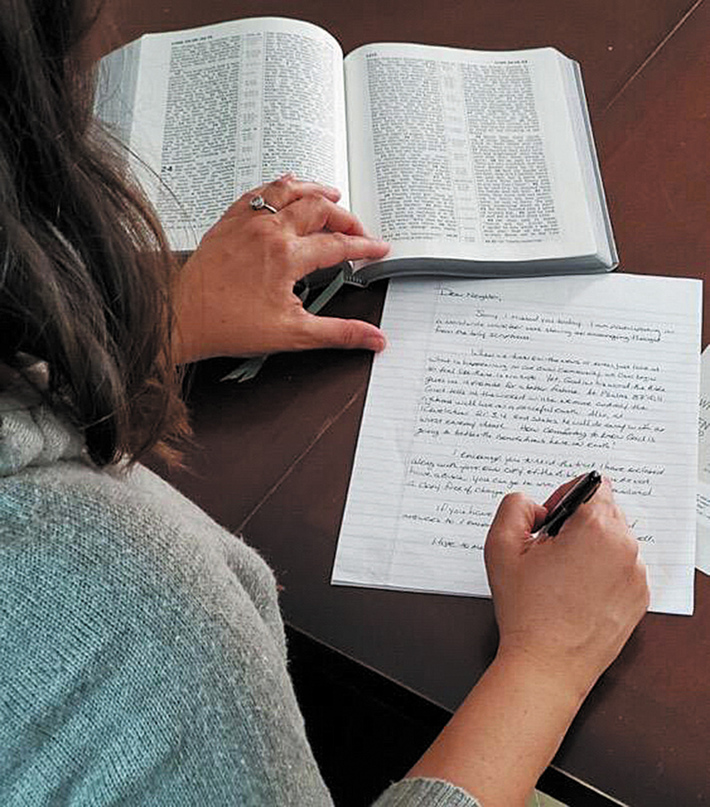 Handwritten letters and phone calls have replaced door-to-door visits as Jehovah’s Witnesses primary methods of spreading their message during the pandemic. Photo provided

No twice-a-week gatherings or door-to-door witnessing? The Jehovah’s Witnesses have a whole new pandemic game plan.

No matter what God you worship, the way you did it changed a year ago when the COVID-19 death rate soared and threats of infection caused churches, mosques and synagogues to “go virtual.”

For Sarah Haupt of Boca Raton, a devout Jehovah’s Witness, Bible study on Thursday and worship on Sunday have been part of her life ever since she can remember, she says.

Now, attending meetings by Zoom has become normal, and for the mother of three children, ages 4, 2 and 4 months, not having to get everyone dressed on Sunday morning is a blessing.

Haupt said the church quickly shifted from communal gatherings at the Kingdom Hall to virtual meetings. Unlike lots of churches that have resumed at least some in-person meetings, JW remains virtual only, not just in Boca Raton but nationwide.

Keeping that regular Thursday and Sunday schedule was a comfort for Haupt personally and to her church family of about 130 “brothers and sisters,” as they’re called. “It would have left a huge gap in our spiritual lives if it just stopped,” she said.

There were “a rocky few weeks” at the beginning but even the oldest people learned Zoom. “They quickly got the hang of it,” Haupt said. “We’ve even seen an increase in attendance.”

Most churches report that attendance has been surprisingly good during the pandemic, in part because some people turn to God during periods of high stress and because those who found it difficult to attend services can stay home and watch online.

Another big adjustment as a result of the pandemic has been the shift by Jehovah’s Witnesses away from door-to-door visits. Now, almost all of Haupt’s witnessing, a primary responsibility and a fundamental obligation of all Jehovah’s Witnesses as a show of faith, is done over the telephone, usually in the early afternoon when the two youngest are napping. She found that people she reached out to on the phone wanted and needed to hear her positive message.

Jehovah’s Witness as a faith is simple: The Bible is literally its bible. The Witnesses don’t depend on any other words except the Bible’s.

They use the New World Translation of the Holy Scriptures, a translation of the Bible published by the Watch Tower Bible and Tract Society, in 1950 (New Testament) and 1961 (the completed Bible). “It’s all very focused on learning and education,” Haupt said. “The deep faith that comes from our strong foundation of knowledge gets you through times of stress.”

The Bible isn’t just full of psalms and parables, but of basic truths and principles to follow, “practical ways that we can live happy lives,” Haupt said, and Jesus is the supreme role model.

“We study so much,” Haupt said. She easily quotes Scripture even as she settles her baby down to sleep. “The beauty of the truth of the Bible is that it’s simple. Why would it be complicated?”

When someone is rude or mean when she tries to start a conversation, she doesn’t take it personally.

“If someone is not happy to see us, that’s fine,” Haupt said. “Jesus was rejected by his own people. I’m not going to worry because I’m following what Jesus told me to do. I’m going to focus on pleasing God.”