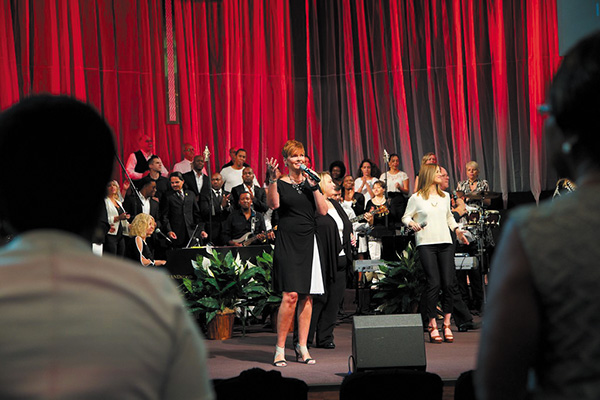 Gospel singer Renee Rowan Basel will perform at Barwick Road Baptist Church, but often sings at Church of All Nations in Boca Raton, where her husband is pastor. Photo provided

She’s the daughter of a pastor, the sister of a pastor and the wife of a pastor.
But don’t ask Renee Rowan Basel to deliver a sermon. She ministers with her voice.
“I sing at churches all across America,” said Basel, who travels twice a month for church performances and works weekdays as the executive assistant at Gulf Stream’s Town Hall.
She describes her music as “a little bit of rhythm and blues, a little bit of country, a little bit of jazz all wrapped up into one.”
“That’s why I like gospel music — it doesn’t fit one niche,” she says.
When she’s not traveling, you can hear her for yourself at husband David Basel’s calling, the Church of All Nations in Boca Raton. She also just dropped an album, Nothing but the Truth, available on CDBaby, Amazon, iTunes and other online outlets. And she will give a special concert April 15 at Barwick Road Baptist Church in Delray Beach.
Basel, 52, was first exposed to gospel in Georgia at the Church of Atlanta Lighthouse, founded by her parents, Al and Linda Rowan. Sundays back then began with watching The Gospel Singing Jubilee on television, then real-life ministry. The family moved when she was 12, first to Pittsburgh and then Detroit. Memories of winters there make her appreciate South Florida all the more.
“It’s definitely paradise compared to the snow they’re having right now,” she said, referring to the late March storm that blanketed northern climes.
She graduated from Central Bible College in Springfield, Mo., won the Miss Southwest Missouri beauty pageant and got a job singing backup to five-time Grammy Award winner Larnelle Harris. Then she hit the road with her traveling solo act for 28 years.
“I like to touch people’s lives and bring a little joy, which I think gospel does,” she said.
She’s most proud of being the mother of Daren, whom she and David adopted when Daren was just 24 hours old. She listens to classical music when she’s feeling devotional and jazz at dinnertime.
“My son has a fit about that—‘Do we have to listen to jazz?’ And I’ll say, ‘Yes we do.’”
The Basels moved to Delray Beach three years ago. The timing was right — the Church of All Nations had an opening and Daren was about to start middle school.
Basel’s favorite artist is R&B songstress Patti LaBelle. She counts Harris as her strongest professional mentor and her parents as her spiritual guides.
“They’re probably my biggest role models in the church,” she says. “They’re my best friends; they’re who I call … almost every day.”
Harris taught her everything from how to warm up her voice to how to deal with other people.
“If a little kid comes up to me I always make eye contact,” just as Harris did, she says.
She also continues to take voice lessons. “You can always be learning a little as a grown-up,” she says.
Basel said she never turned down an opportunity to sing, whether the audience was 3,000 or merely 10. Her advice to young people starting out is simple: “Go with your gut and walk through every open door that is put before you. That’s how I started out.”
Basel came to Gulf Stream as a temporary worker in 2015 and was given a permanent position soon after.
“She fit right in,” Town Clerk Rita Taylor said.
Basel’s favorite quote is not a musical lyric but a verse from the Book of Romans: “Take your everyday, ordinary life — your sleeping, eating, going-to-work and walking-around life — and place it before God as an offering. Embracing what God does for you is the best thing you can do for him.”