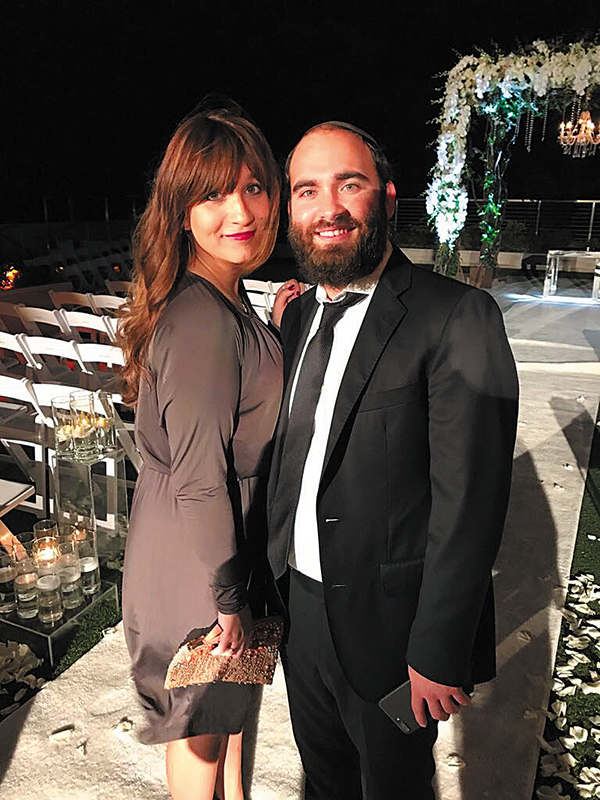 Rabbi Shmuel Biston leans heavily on his wife, Sarah, in his new role as the chabad’s co-director. Photo provided

For Shmuel Biston, being a rabbi is the family business. His father, Yosef Biston, is a rabbi in Parkland. His brother is a rabbi and several of his four sisters are rebbetzins, married to rabbis and with important leadership roles.
Today, at 28, the younger Biston is the co-director of Chabad of East Delray. He has his sights set on establishing a vibrant Jewish community on the coast where all Jews feel welcome.
Biston, who’s known as Shmuli, knew he’d be a rabbi and never questioned it.
“I always liked praying and speaking and giving back to the community,” he said.  He completed his rabbinical studies by age 21, which is early for anyone to commit to a life path, especially one with such great responsibilities.
He joined his father at Chabad of Parkland, the same synagogue where Shmuli had grown up. His parents moved to Miami in 1973 and promoted Jewish life in Aventura, Fort Lauderdale and Boca Raton before founding Chabad of Parkland in 1998.
Chabad, Biston says, is a Hebrew acronym that stands for wisdom (chochma), understanding (binah) and knowledge (da’at). It’s nondenominational, a place where “you don’t have to be something you’re not,” he says.
Biston understands the complexity of the Jewish family: “You have two Jews, you have three opinions,” he laughs. “But no matter how you look at it, we are all children of God.”
Biston’s easy manner and friendly nature make him a welcome sight at times of great personal stress. He serves as the chaplain for the Delray Beach Police Department and is on call for emergencies at local hospitals.
But it’s the focus of most places of worship to attract new members and retain existing ones.
“I want to build a community from the ground up,” Biston said.
In September, Chabad of East Delray held High Holy Days services for Rosh Hashana and Yom Kippur at the Residence Inn by Marriott on Atlantic Avenue. You didn’t need to be a member and you didn’t need to buy a ticket, even though Chabad is self-funded.
Biston’s altruism stretches to accommodate the needs of his community. From marriage counseling to lessons in Torah to programs for young professionals, Biston wants to be a full-service go-to source for all Jews.
He understands that bringing people back to the fold is hard. “I worry they don’t realize what religion has to offer them because they had a bad experience,” he says.
Biston doesn’t care if you never went to synagogue. Everyone is welcome, “with no judgment of any kind.” He said he learned to let go of judgment when he spent a year in Cape Town, South Africa. It’s counterproductive and narrow-minded, he says.
In addition to his rabbinical studies, Biston said, “I was fortunate to get a lot of real-life experience.”
It wasn’t all good. When he was 23, Biston was attacked by strangers because of his faith. It doesn’t compare with what his grandparents faced as Holocaust survivors, but he says it taught him to “hate injustice” but not to hate.
As many rabbis do, Biston leans heavily on his wife of just over two years. He met Sarah through friends and traveled to Montreal to visit.
By the fourth date, Biston was sure. “I liked everything about her. She’s funny and easygoing, and she can roll with the punches. We were on the same path,” Biston said.
Sarah understood the responsibilities of being the wife of a rabbi, and she welcomed them. “I think it’s harder than being a rabbi,” Shmuli Biston said.
He is driven by his faith, his insatiable curiosity and a deep need to understand the world.
“I’m interested in not only action but understanding. Why are we doing what we’re doing? My life is about constantly learning and growing,” he said. “You do acts of goodness and kindness. You learn a little. You pray a little. That’s life.”
For more information about Chabad of East Delray, visit www.jewisheastdelray.com. Biston can also be reached at 954-857-3543 and rabbi@jewisheastdelray.com.