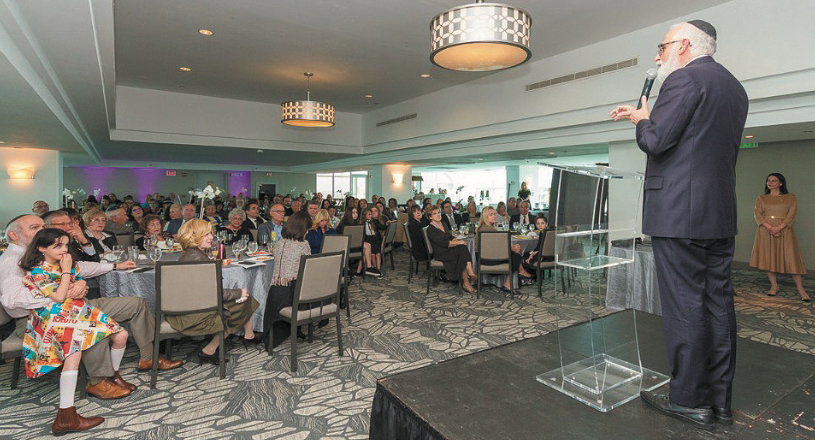 Rabbi Ruvi New of the Boca Beach Chabad speaks at the inaugural Women of Valor brunch in January. New invited women to share stories of courage and commitment for the Chabad’s book, due to be published early next year. Photo provided

Mother’s Day is May 12, but Rabbi Ruvi New, director and spiritual leader of Boca Beach Chabad, hasn’t needed a holiday to think about the mothers and wives, sisters and sisters-in-law, in his congregation.

New says he’s seen “a coming together” that has put women’s issues front and center. Amid the #MeToo and #TimesUp movements, people seem to be listening, he said.

Now the rabbi wants to provide a platform to present the stories he’s heard about the quiet courage and unbreakable commitment, the strength, resolve and stamina, of Jewish women. He realized that those stories were being lost.

So he found a solution.

In January 2020, Boca Beach Chabad will publish Women of Valor: Sharing Stories, Celebrating Lives, a coffee-table style book of pictorial retellings of personal stories about women who represent the best of humanity.

“These stories need to be disseminated,” New said, “now, before they are lost.”

There are few restrictions on the stories you can submit. You can write your own story or someone else’s. The subject can be living or dead, famous or unknown. They can even be reluctant, like Sibyl Silver.

Silver, who lives in Boca Raton, was asked by New to include her story. Silver is no egotist. But when you shift the focus to something she does want to talk about — the Torah — she comes alive.

On a trip to Budapest, Silver and her husband, Robert, learned that 113 Torahs taken from the Hungarian Jewish community during World War II were decaying in a sloppy pile in the dank basement of the Lenin Scientific Library in Gorky.

Silver, a fixer and a rescuer, set upon a mission to rescue the Torahs, but then her husband died. Eventually Silver moved forward and started the Jewish Heritage Foundation to pay for the scrolls’ restoration and return to the community.

The rabbi told her that publishing her story would help her rescue more Judaica, so she agreed. Returning these precious heirlooms to their rightful owners is very important to her.

“The way I looked at it, rescuing the Judaica confiscated during the Holocaust gave meaning to the lives of those who didn’t survive, and returning it to the families was the best good deed I could ever do,” she says, insisting again that it’s about the act, not the actor.

Author and lecturer Lieba Rudolph wrote her own story and she signed on to edit the book, using her skills as a writer and researcher

to flesh out the stories and polish them to a high shine.

“Women have a wisdom that has to be heard,” she said from her home in Pittsburgh.

They don’t have to save lives or donate a million dollars, she said.

“Every bit of good a person does helps accumulate good in the world.”

New thinks memorializing a woman you love would make an appropriate and meaningful Mother’s Day tribute, and he’d like to publish 100 stories in the book.

The rabbi says the response has been positive and widespread, with inquiries from around the world and from people who want to copy the idea.

“I hope it will be emulated,” New said. “Research shows that children who know about their parents’ lives, their struggles and their achievements, feel closer and more connected to their families.”

The full-color hardback book should be available early next year, New said. Submissions are being accepted now.

Rudolph stresses that all women are worthy.

“Every woman has a story,” she said. “Every good deed, every kind word, even a positive thought tips the scales. Good accumulates.”

You can call New with questions at 394-9770 or email him at rabbi@chabadbocabeaches.com. For more information or to submit a story (there is a fee), visit BocaBeachChabad.org or womenofvalor.life.