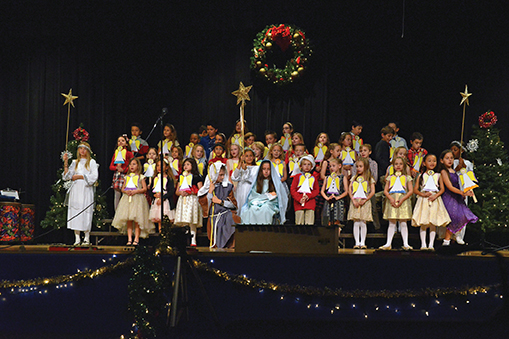 The holiday season is full of shopping and shows, concerts and parties. Parishioners are polishing the stained glass and putting on their dress-up clothes. They’ve got a lot to offer. Here’s a sampling:

St. Paul’s goes Victorian
This year, St. Paul’s is inspired by how things were in the 1800s.
The church’s “Festival of Lessons and Carols” is its most colorful and meticulously planned holiday event. It features favorite Christmas hymns, carols and anthems performed by the St. Paul’s choir and instrumental ensemble. Drawn from composers of the times, the program features works by Sir Charles Hubert Hastings Parry, Sir John Stainer, Sir Joseph Barnby, Sir Edward Elgar, Sir Arthur Sullivan, and Gustav Holst. The congregation will be invited to sing along with the hymns and carols.
If you go: the Festival of Lessons and Carols: A Victorian Christmas — 3 p.m. Dec. 20, St. Paul’s Episcopal Church, 188 S. Swinton Ave., Delray Beach. A free-will offering will be accepted.

More Christmas events
Christmas Collage...Christmases Past & Present: 7 p.m. Dec. 6, First United Methodist Church, 625 NE  Mizner Blvd., Boca Raton. A concert featuring some of the best-known Christmas songs. Free. Info: 395-1244.
The Star of Bethlehem: A screening of this documentary by Steven McEveety, the producer of The Passion of the Christ, will be held in Kellaghan Hall at St. Vincent Ferrer Catholic Church, at 6:45 p.m. Dec. 6, following the LifeTeen Mass at 5:30 p.m. The filmmakers used modern scientific techniques and advanced astronomical technology to reveal the historically accurate events in the night sky that foretold the coming of the messiah. RSVP to Irene Hey at 573-6256 or Irenebyard@aol.com.
Unity of Delray Beach Children’s Play: A special children’s program, The Christmas Story According to St. Luke, takes place at the 9:25 a.m. service Dec. 13. The Sunday school children will perform as their gift to the congregation. Children and grandchildren visiting from out of town are encouraged to participate in this magical show. Costumes will be provided. At 101 NW 22nd St., Delray Beach. Info: 276-5796; unityofdelraybeach.org
St. Vincent Ferrer Christmas Concert: 7-9 p.m. Dec. 15. A performance by St. Vincent Ferrer Catholic School students in the Parish Life Center, 840 George Bush Blvd., Delray Beach. Free.
St. Mark Catholic Church’s Christmas Pageant: 7 p.m. Dec. 20. The popular pageant presents a retelling of the Christmas story using cast members, both children and adults, from the congregation. The church is at 643 St. Mark Place in Boynton Beach. Info: 734-9330.

Congregation Beit Kulam brings it home
Congregation Beit Kulam will be celebrating Hanukkah on Dec. 11 in the most fundamental way: with a meal at the family dinner table. A really big dinner table.
Rabbi Joan Cubell, formerly at Temple Beth Shira, will lead the celebration, of course, because, well, it’s her house in the Polo Club in Delray Beach. And she expects a full house, including kids and canines.
“Animals and children are always welcome!” Cubell says. She has six dogs of her own. You also need to bring your own menorah. “Everyone brings one and we light them together like a big family. Then we sing Hanukkah songs. We have a guitar and piano player.” They’ll also play games. And of course there’s tons of food made in her home’s Kosher kitchen.
Sometimes called the “Congregation of Everyone” for its “for everyman” philosophy, Beit Kulam also is “the Congregation That Does,” Cubell says. “We don’t just say we’re going to do it, we actually do it!”
Cubell is the first female rabbi to be ordained as rabbi with s’micha (rabbinical ordination) from Tifereth Israel Rabbinical Yeshiva in its 60-year history and the first woman to be accepted as a member of the American Council of Rabbis.
For more information, visit cbkulam.org.

The cherry on top of Chabad of East Boca’s Chanukah Festival will be the performance by Israel’s King of Blues/ Rock, Lazer Lloyd, who performs in Sanborn Square in Boca Raton on the eighth night of Hanukkah.
Lloyd’s most recent album, an eponymous album released in June, has garnered a suitcase full of rave reviews for his skillful riffs. One of the best-known blues musicians in Israel, the Connecticut-raised singer/songwriter was born Lloyd Paul Blumen 40-something years ago. (Lazer is short of Eliezer, Lloyd’s Hebrew name.) Living abroad in Israel for the last 20 years ago, Lloyd has watched Israel’s love for the blues blossom. Now the land of his ancestors attracts A-list blues artists. Lloyd contends the blues have been there all along. He told The New York Times, “We consider King David to be the first blues singer.”
The event also features carnival rides and food, and a menorah lighting. Tickets are $10 for adults, $5 for kids. For more information, visit chabadbocabeaches.com. Chabad’s dreidel honors
Who owns the world’s most expensive dreidel?
According to the Guinness World Records, Chabad of South Palm Beach County does. The record was officially claimed on Oct. 23.
“Dreidel” is Yiddish for a spinning top, and most dreidels are toys. In the past, they were made of clay. This one is made of precious gems and metals.
The four-sided dreidel has a silver Tiffany frame, gemstone-encrusted gold plates with the four Hebrew letters: Nun, Gimmel, Hay and Shin, which form the acronym of the phrase: “Nes gadol hayah sham” or “A great miracle happened there,” a reference to the Hanukkah miracle.
The top point is antique turquoise, and the point on which it spins is a diamond. The artist who made it, Pedro Maldonado of Artisan Jewelers in Manalapan, also used free-hanging diamonds and gems that sparkle when it spins.
Chabad of South Palm Beach appealed to the Guinness World Records Inc. to create custom criteria for this new category — the World’s Most Valuable Dreidel.
“The completed  Dreidel  meets and exceeds the Guinness requirements in every category,” Rabbi Leibel Stolik said.
Maldonado donated his skills to craft the piece, valued at $14,000.

Janis Fontaine writes about people of faith, their causes and community events. Contact her at janisfontaine@outlook.com.