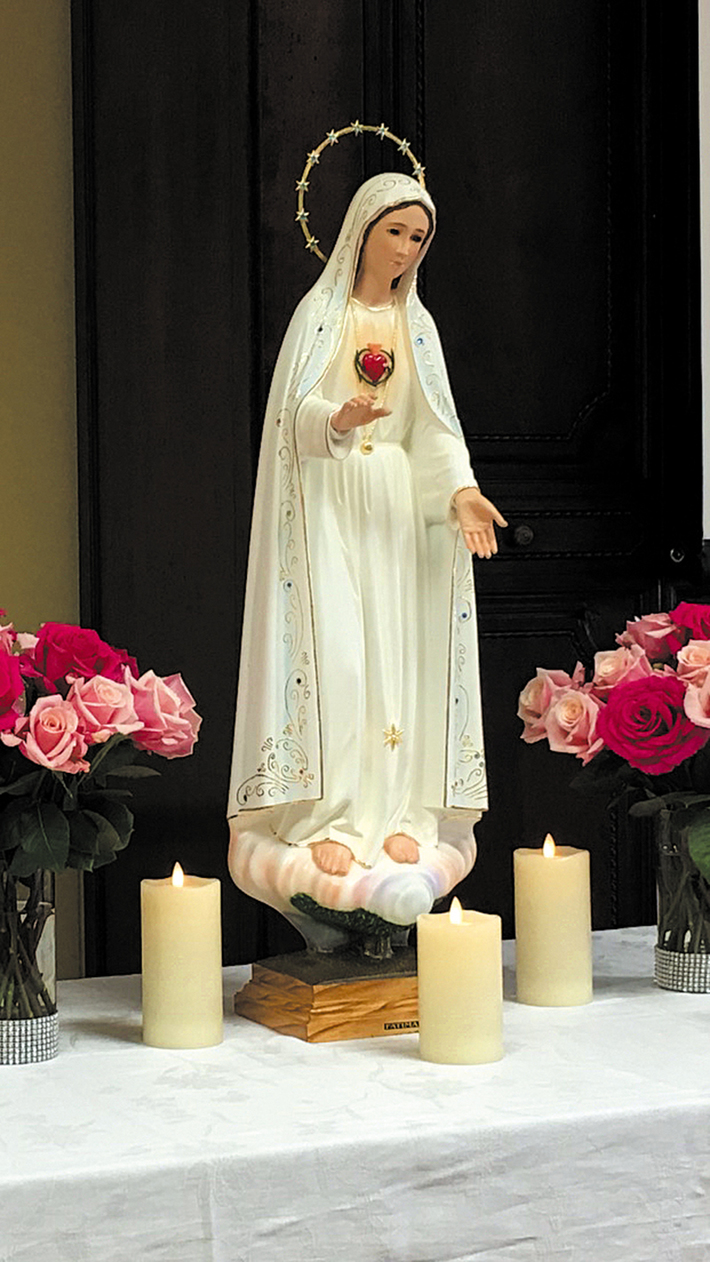 A statue of Mary, like the ones the Legion of Mary provides to families to improve their relationships with Jesus. BELOW: A traditional Catholic rosary from the Vatican and a shorter Anglican rosary. Photos provided

Everyone knows what day Jesus was born — or what day we agree to say he was born. But what about Mary, the woman who gave him earthly life after Christian faith says she conceived him through the Holy Spirit?
No one knows, but the official date to celebrate Mary — known to Catholics as the Virgin Mary and the Mother of God, and now a saint — is Sept. 8. Catholics celebrate it as a holy feast day (called the Feast of the Nativity of Mary) and for commemoration, especially if their church is named for the saint.
Mary is sometimes forgotten, like our own mothers, until someone is needed to play the role in the Nativity story. But there are others for whom Mary is the holiest and greatest of all saints known for her virtue, as important as their own mothers. Almost.

At 8 a.m. at St. Lucy Catholic Church in Highland Beach, before Father Brian Horgan says Mass at 8:30 a.m., worshippers gather to pray the rosary. These devout Catholics find comfort in the repetitious prayers — during the rosary, they repeat the Hail Mary prayer 53 times.
It’s a tradition that Horgan loves.
“I love my mother dearly,” the priest said. “The most important person in the family is the mother. The first miracle that Jesus performed was at the request of his mother. What son would refuse his mother?”
Lisa Vargas, who organizes the Legion of Mary at St. Vincent Ferrer Catholic Church in Delray Beach, says God prepared a special person to be “the queen of heaven and Earth. She was completely pure and free of original sin.”
The local Legion of Mary (the international organization began in Dublin, Ireland, in 1921, and now has branches worldwide) meets weekly. Each person commits to doing two hours of spiritual work each week, such as taking Communion to someone in the hospital.
One of the most popular works is organizing the traveling Mary statue. The Legion, which has more than two dozen regular members, has eight statues of the Virgin Mary that it lends to people who want to improve their relationships with Jesus, with the help of his mother. To some, it symbolizes their giving shelter to the holy family.
The Legion’s members deliver the statues — most are 33 inches tall and made out of resin, so are fairly lightweight — to different families every few months, but Vargas says they’ve become so popular, there’s a waiting list.
Vargas also teaches the rosary, about its four groups of “mysteries” — joyous, sorrowful, glorious and luminous events of Catholic faith — and what they mean, and how you move your fingers around the beads to keep count.
The rosary is not exclusively Catholic. There is an Anglican (Episcopal) rosary with fewer beads and different prayers. And prayer beads as a spiritual tool are common in many religions. These days, you’re more likely to see someone wearing rosary beads for fashion than for prayer.
The Catholic rosary is not complicated, but it is contemplative and it has measurable physical, emotional and spiritual benefits. Liz Kelly, in her book The Rosary: A Path to Prayer, wrote that the rosary “is sometimes seen as too simple and therefore as superficial.”
And it is simple, which makes it easy to learn. “The gentle repetition of its prayers makes it an excellent means to moving into deeper meditation,” she writes.
While other meditations may focus on breathing or nothingness or nature, the rosary’s focus is on the spiritual realm.
For Lisa Vargas, the Blessed Mother’s most precious gift is as an intercessor. She, like most mothers, has her son’s ear.
Father Dennis Gonzales at St. Vincent Ferrer prays the rosary every Friday night, a family tradition his grandparents taught him back in his native Philippines.
“I always ask her intercession to guide me and clear my way in whatever endeavor I have in life,” he said.
St. Lucy’s Horgan says that Jesus’ final act of love from the cross — making the disciple John the son of Mary and Mary his mother so that both would be cared for — shows how important his mother was to him.
It’s a lesson the children in St. Vincent Ferrer’s religious education program will study in October when they talk about Mary and the rosary.
“We want parents to practice the rosary with their children,” said Angelica Aguilera, director of faith formation. “It strengthens the children’s faith to see their parents doing it.”
Aguilera says that parents are diligent about enrolling their kids in religious education classes during the second grade so they can take part in First Communion (receiving Holy Communion for the first time), but attendance seems to drop off afterward. She’s looking for ways to get families involved, so she is hosting parents one week a month where they come to class with their children. “We want to make praying together as a family thing.”
Horgan thinks that teaching more reverence toward Mary might raise women’s status in society. No woman is disposable, even if that is what society says whenever it treats women as objects that you can replace, he says. He says step one is to use Mary as a model for positive change.
“I wonder where we’re going as a society,” he said. “More and more I think we’re stuck. We’re not going anywhere.”
But society still has potential, he said. “People are inherently good. We need to help each other be good people.”