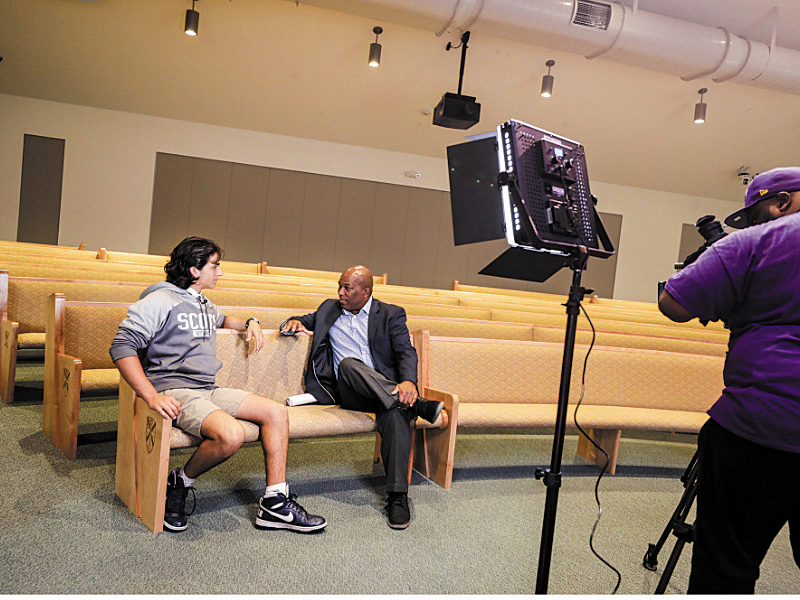 Cameron Newman talks with Shayne Wright of WPBF-TV about helping victims of the shooting at the Chabad of Poway. His Go Fund Me page has raised more than $127,000. Photo provided

Cameron Newman is only 15 years old, but his mother, Stephanie Newman, says he's an old soul.

When the Boca Raton teenager heard about the gunman who attacked the congregation at Chabad of Poway, about 20 miles north of San Diego, he had to do something. Because the shooting took place in a synagogue, it had special significance for Cameron, a deeply faithful teenager whose grandmother was a Holocaust survivor.

His Go Fund Me page raised more than $127,000 from more than 2,400 donors in just 18 days. Donations — to help pay for medical care for the victims, funeral services, repairs to the synagogue, and to assist victims on a case-by-case basis — are still being accepted, with a goal of $180,000.

About 100 people were worshiping when a 19-year-old gunman took aim at the rabbi leading Shabbat services on the final day of Passover. A woman, 60-year-old Lori Gilbert-Kaye, shielded the rabbi, witnesses said, and took that round. She died at the scene. The gunman’s weapon jammed, allowing about 10 rounds, but he wounded three others, including Rabbi Yisroel Goldstein and a child.

The gunman’s motive can only be surmised from a racist, anti-Semitic, anti-Muslim, hate-filled rant he posted before the shooting. He surrendered to police a few hours later.

Cameron is four years younger than the shooter, but he has a very different view of the world.

Cameron attends Saint Andrew’s School, a college preparatory school “founded in the Episcopalian tradition” in Boca Raton. The ninth-grader is a deep thinker and he’s trying to grasp the nuances of American and Israeli politics, but it’s not easy. Every event, every act, every photo is captured and replayed through the often distorted lens of social media.

“A lot of social media is just a highway where you can slam other people for their beliefs,” Cameron said.

But more damaging to our personal freedoms, he says, is the widespread attitude that if you don’t believe what I believe, you’re wrong or bad. People no longer look for common ground.

The “insensitive” mainstream media don’t help matters, he says. They decide what’s important and what to focus on, ratcheting up our differences and widening our divisions.

Cameron, in solidarity with his community, felt he had to act, and he had to act fast. He wanted to have something to show the rabbi when he got out of the hospital that would tell him the world cares.

Cameron said he wanted to do something positive to mitigate the negativity of the shooter’s act. So he created a Go Fund Me page to collect donations for the victims.

“It gave people something positive to do, an avenue where they could help,” he said.

As much as the money will help, Cameron says the fund also shows the world that good people still exist. It gives him hope.

Edmund Burke, the 18th-century author, politician and philosopher, wrote, “The only thing necessary for the triumph of evil is for good men to do nothing.”

Cameron knows he can’t stop evil by speaking up, but maybe he can slow it down.

His Go Fund Me money will go directly to the Poway Chabad. Find the fund here: www.gofundme.com/help-victims-of-poway-san-diego-synagogue-shooting.