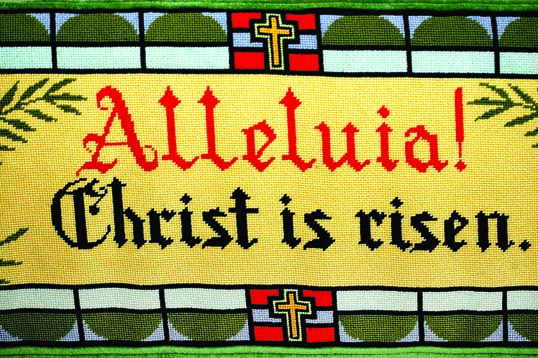 and kneeling cushions, including this one, her favorite.

Ruby van Rooyen was a dancing angel at St. Joseph’s Episcopal Church for years before she died at age 107.
She joined the Boynton Beach church when she moved to Delray Beach in 1966. Her contributions include the church parish hall, named in her honor, and the new music building — for which she was able to hoist a groundbreaking shovel at age 104. 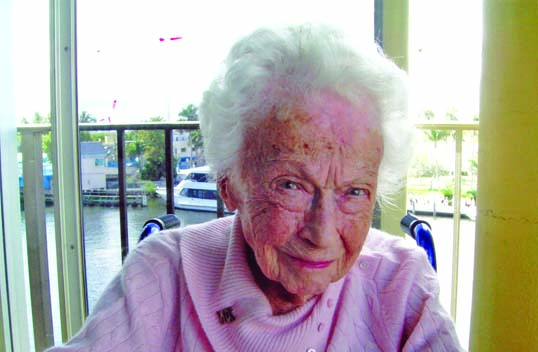 She’s best known for leading the church ladies in an Altar Guild needlepoint project to decorate the communion kneeling cushions and altar chairs.
The Rev. Martin Zlatic raised her favorite cushion with the words “Alleluia! Christ is Risen.” at the Dec. 7 memorial service after her Nov. 28 death.
“She would speak the truth in love, whether you wanted to hear it or not,” Zlatic said, recalling her words to him when he arrived in 2000. “Ruby said ‘you got to do something because they’re not exactly beating down the doors.’ ”
She was born on June 6, 1907, in northeast Georgia. After the death of her first husband, a large auto parts dealer in New York City, she married widower friend Abraham van Rooyen, a major importer of tulip bulbs.
Her second husband died shortly after the couple moved to coastal Delray Beach. She is survived by many grand and great-grand nieces and nephews.
Mrs. van Rooyen led the way for St. Joseph’s to grow with the same vigor that she displayed as a ballroom dancer.
She quit competitive dancing at age 98 only because there was nobody left in her age category to compete with. Then she invited the congregation to see her perform in a dance exhibit celebrating her 100th birthday.
“Because she danced her life, a lot of other people could dance as well,” Zlatic said. “I hope she’s dancing now with the angels.”