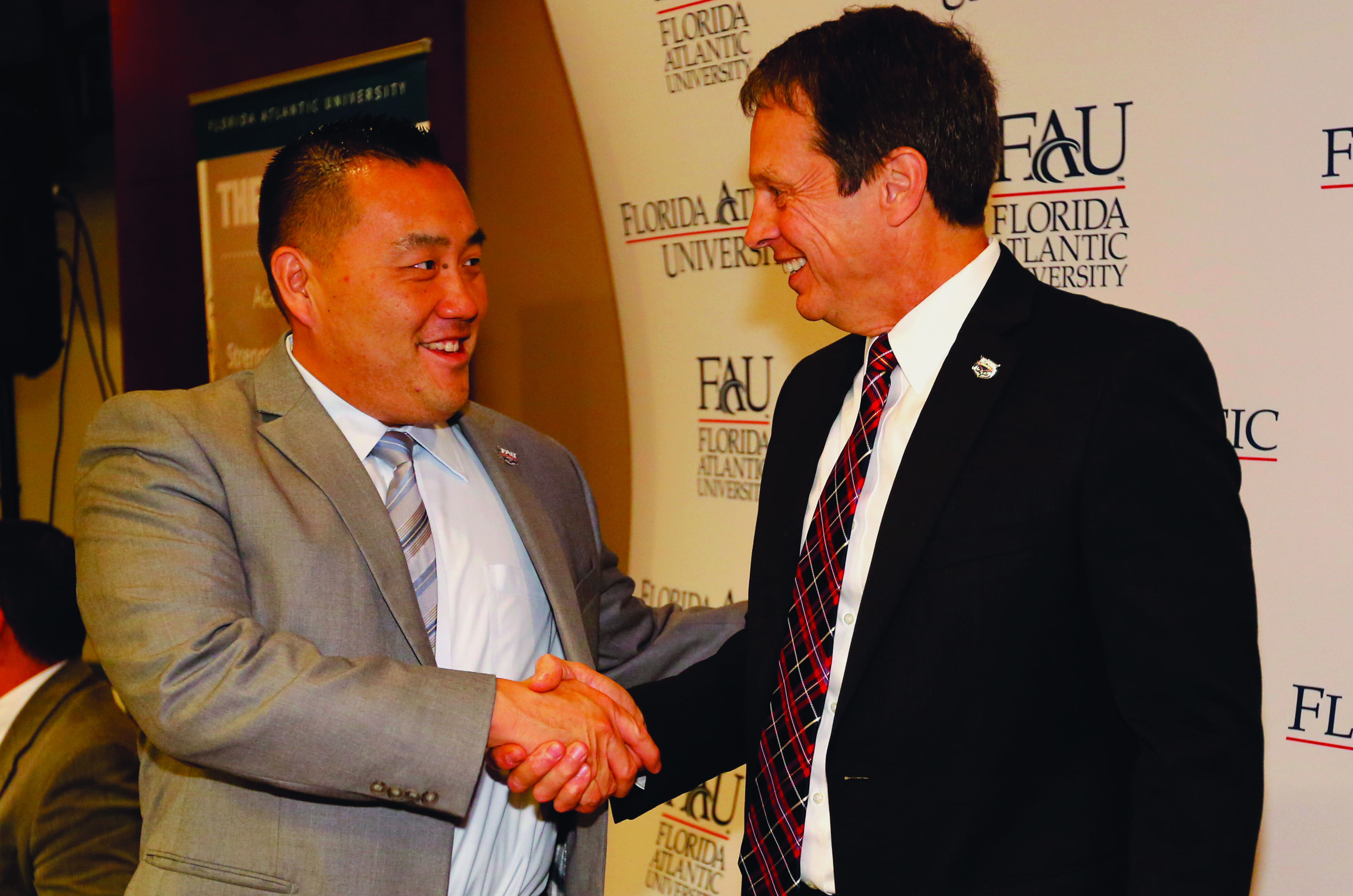 to announce the gift of $16 million by Dick and Barbara Schmidt, seen below (at center) in this May 2014  file photo. 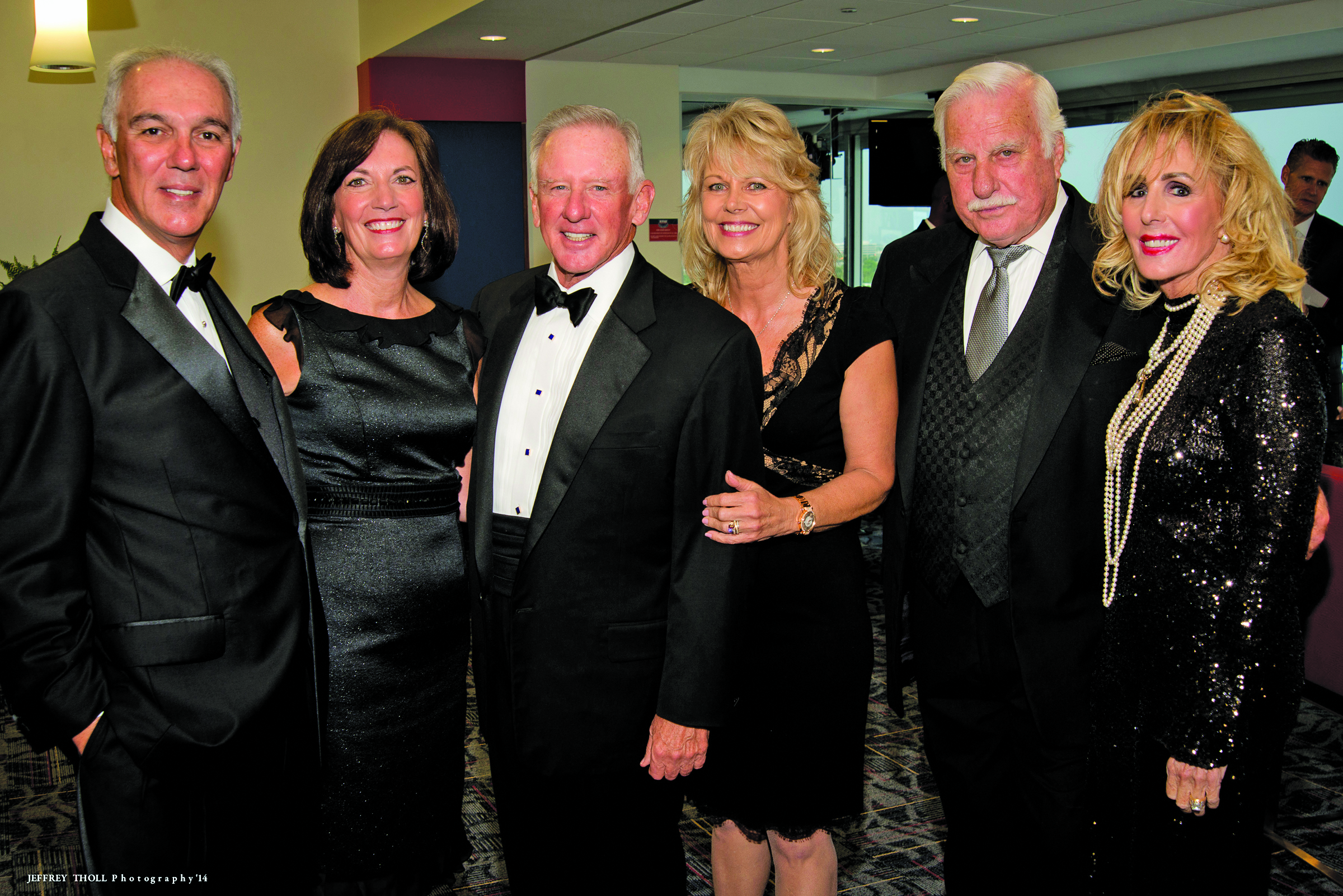 The Schmidt Family Foundation has donated $16 million to Florida Atlantic University, which will go toward a planned $45 million -$50 million, 185,000-square-foot complex that will benefit students and student athletes at the university.
“We’re thrilled today to announce the largest gift in the history of Florida Atlantic University,” said FAU President John Kelly, who announced the gift during a Dec. 2 press conference at the college. “It will be the lead gift in a large campaign for an athletic and academic complex designed to be rivaled by none in the country.”
When finished, the Schmidt Family Complex for Academic and Athletic Excellence will house an academic success center; strength, conditioning and wellness centers; a sports medicine center; and a football center — which will include media rooms, offices and a locker room.
“It will also hold an indoor practice facility, administration offices, and a history and tradition hall, which will celebrate the great history of FAU,” he said. “As our athletics programs prove successful on the national stage, more and more people will be interested in coming here.”
The Dallas-based firm of HKS Architects was retained to do a feasibility study on the project, which will find its remaining $29 million -$34 million in funding through philanthropy in the private sector.
FAU participates in 21 sports, 19 sanctioned by the National Collegiate Athletic Association. Head football coach Charlie Partridge said the new complex would provide a shot in the arm to all of those programs.
“What you see in the design of this facility is something that’s designed for all 21 sports, with development in mind,” Partridge said. “Full-rounded development, from the academic support to the medical support to enhancing their athletic development — putting them in position to practice, regardless of weather. That puts us in position to compete on a national scale.”
Although Kelly said the $16 million could go a long way in financing sports complex architects and planning the project, Pat Chun, FAU’s vice president for athletics, could not commit to a specific start date for the complex as yet — not until more money from the private sector is secured.
“We’ve been working at this for quite some time and we feel very good about who we’ve been talking to,” Chun said. “We’re hopeful over the course of the next few weeks and months that we’ll have some follow-up announcements about when we’ll put a shovel in the ground.”
Kelly said the complex will also benefit FAU students studying sports management.
“We’re No. 4  in the United States and No. 6 in the world, with the sports management program that Dr. Jim Riordan leads,” Kelly said. “Jim and his team will be a part of this complex, as well. So not only will our students in that program have an opportunity to be in a university that’s on that ascension ladder, they will also be a part of the daily operations there.”
Partridge called the complex “a game changer,” allowing FAU to recruit a higher level of student athlete.
“We’ve outgrown the old facility,” he said. “This new athletic village changes everything, not just for football, but for the entire athletic department.”